Parkinson’s Disease Therapeutic Market size is set to surpass USD 8 billion by 2027, according to a new research report by Global Market Insights Inc.

Growing preference for Levodopa/Carbidopa therapeutics will spur the market value 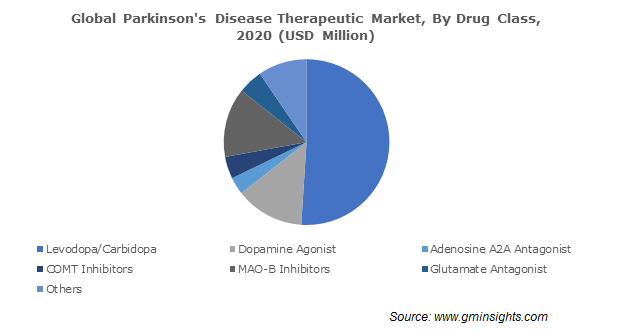 Levodopa/Carbidopa segment revenue was around USD 2.64 billion in 2020. The preference for uptake of this drug is high as Levodopa in combination with Carbidopa is considered the standard treatment for symptomatic treatment of Parkinson’s disease. Levodopa is the most efficacious, best-tolerated drug and can be administered with other drugs to treat Parkinson’s disease patients.

Transdermal segment is projected witness 6.8% growth rate till 2027. Transdermal route of administration is widely adopted as it is potentially effective replacement to existing therapies, minimally invasive and simple to use. Transdermal delivery of Parkinson’s disease therapeutics is extensively preferred due to several factors including constant rate of drug delivery, easy to use and non-invasive property. Recent advancements in skin permeation techniques further contributes to its increased adoption.

Some of the major companies operating in the market include Orion Corporation, Roche, AbbVie Inc., Acadia Pharmaceuticals, Amneal Pharmaceuticals, UCB, Teva Pharmaceutical among others. These major industry leaders are engaged in research and development in order to develop novel Parkinson’s disease therapeutics that will provide significant growth opportunities.