Neurostimulation Devices Market size worth over $22 bn by 2026

Neurostimulation Devices Market size is set to surpass USD 22 Bn by 2026, according to a new research report by Global Market Insights, Inc.

Increasing prevalence of neurological disorders such as epilepsy, depression, Alzheimer’s, dementia, Parkinson’s disease, migraine, and multiple sclerosis is favoring the market growth. According to the Alzheimer’s Association, in the U.S. more than 5.5 million Americans are living with Alzheimer and this number would reach 16 million by 2050. Of these, about 5.3 million patients are older than 65 years and about 200,000 patients are under 65 who have a younger onset of Alzheimer's. Such stupendous rise in the patient population will certainly drive the market demand.

The sacral nerve stimulators segment valuation was around USD 1.4 billion in 2019 due to rising number of people suffering from incontinence disorder requiring sacral nerve stimulators for treatment. Industry players are putting enormous efforts in the research and development to develop better and innovative devices. These devices help in the effective management of neurological disorders. Additionally, ability of sacral nerve stimulator devices to stimulate the bladder, sphincter, and bowel muscles for normal functioning will boost the market revenue. 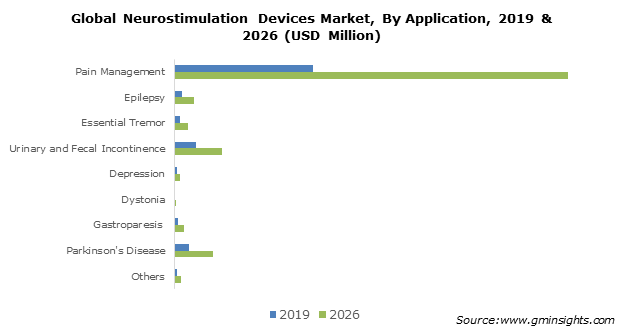 The pain management application dominated a market share of around 70% in 2019 on account of availability of implantable stimulator devices that prevents pain indications. Increasing prevalence of pain disorders such as leg pain, chronic pain, disk surgery pain among others will in turn increase the market demand.

Some of the prominent companies operating in the neurostimulation devices market are Abbott, Bayer AG, Boston Scientific, IntraPace,  Laborie, LivaNova, Medtronic, Neuronetics, among others.

Neurostimulation Devices Market
Contact Us  Request Free Sample
Top
Chat with us
We use cookies to enhance your experience. By continuing to visit this site you agree to our use of cookies. More info X