Military Robots Market size is set to exceed USD 27 billion by 2027, according to a new research report by Global Market Insights Inc.

The development of fully automated Unmanned Ground Vehicles (UGVs) is expected to create lucrative opportunities for the military robots market. AI-based fully automated military robots and UGVs are equipped with various advanced technologies such as wireless fidelity (Wi-Fi) and GPS. The increasing deployment of these machines in critical, hazardous, and complex military operations is anticipated to support the market for military robots.

The high cost of military robots will hinder the market growth during the forecast timeline. Military robots consist of various advanced sensors, wireless technologies, and high-end rugged design, making them costlier than other robots. Many governments in developing economies cannot afford unmanned systems due to their low defense budget. In response to this market factor, key players across the globe are partnering with government defense agencies to produce low-cost and affordable military robots as per their requirements. 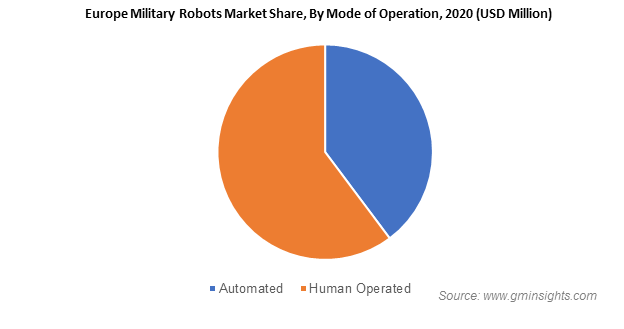 The outbreak of COVID-19 has critically affected the supply chain of several businesses globally. Before the pandemic, many government agencies planned to develop several human-operated and automated military robot systems. However, due to the unprecedented health crisis, the defense departments of various countries are cutting their national security budgets to focus on healthcare and research sectors. Due to industry challenges, such as limited workforce availability and international trade restrictions, many governments are focusing on the domestic development of unmanned and automated systems for aerial, naval, and land-based security applications.

Human-operated robots will fuel the military robots market in 2020

Human-operated military robots are handled by soldiers from the command center to search, track, rescue, and provide various military-related services in biological, nuclear, chemical, and radiological environments. Human-operated robots are cost-effective compared to their autonomous counterparts and are expected to increase their representation in the market.

Over 1,200 units of human-operated robots were sold in North America market in 2020. Human-operated military robots can engage and attack the target set by a human operator. All the processes are determined by remote use sensors or by direct visual observation. In August 2020, the U.S. Army developed a voice-controlled intelligence platform for controlling war robots using speech recognition technology. Rapid technological advancements are expected to spur the military robots industry.

Aerial-based military robots will grow at a high rate

The Europe land-based military robots market is projected to grow at more than 7% CAGR from through 2027. The industry statistics are supported by new product launches from market players. For instance, in June 2018, FLIR Systems launched Black Hornet 3, a nano UAV to navigate GPS-denied environments, detect threats, and provide live information to warfighters to maintain situational awareness.

Growing need for providing direct support in terms of communication, engineering, and intelligence will drive the combat support market

The Europe military robots market share is poised to expand at 6% CAGR through 2027. The adoption of UAVs in Europe is slower than in the U.S. and Israel. Moreover, the increasing use of UAV systems in Afghanistan and Iraq will drastically improve the market demand in Europe. The European military forces are progressively investing in UAV systems, which include mini UAVs and MALE UAVs, thus augmenting market revenues. In response to the industry trend, European military forces are also planning to expand their UAV portfolio by acquiring unmanned combat aerial vehicles.