Military UAV Market revenue will reach USD 13 billion by 2024 with over 18 thousand units fleet size; according to a new research report by Global Market Insights Inc.

The military UAV market is expected to show unprecedented growth over the forecast timeline due to the rapid adoption of AI and machine learning algorithms for enhancing the capabilities of drones. As military UAV systems are complex, machine learning and AI are used to study & understand the data to provide quick analysis and insights. This enables the government & defense organizations in performing high-level reconnaissance activities. Another factor supporting market growth is the growing public and private-led investments in drone technology. In August 2015, Intel invested USD 60 million in Yuneec International, a Chinese drone manufacturer. The company used its investment to promote Intel Real Sense Technology along with its processors for drones.

The hybrid drone market is projected to hold a market share of over 10% by 2024 as these drones have integrated capabilities of both the rotary blade and fixed-wing drone. This makes these drones very proficient and durable for usage in surveying, media & entertainment, agriculture, and inspection & monitoring applications. Also, the rising investment by drone manufacturers for the development of hybrid drones will support market growth. 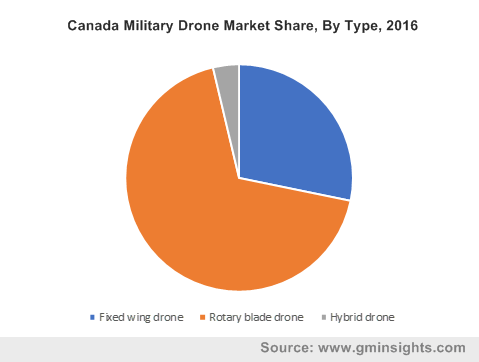 The autonomous military UAV market is projected to witness an accelerated growth between 2017 and 2024. The market growth is attributed to the technological advancements, such as the use of machine learning and AI, to speed up the data analysis process to generate valuable insights. Autonomous drones are expected to be deployed in various use cases as the need for implementation of drone technology increases exponentially where humans cannot reach conveniently and independence in machine use is required.

The EVLOS military UAV market will hold a market share of over 5% by 2024. EVLOS operations refer to the method wherein a remote Pilot in Command (PIC) uses one or more observers to maintain the drone in the visual line of sight at all times. This gives power to the operators for more control and to operate the drone beyond his direct vision, thus supporting market growth.

The defense application segment is anticipated to grow at a CAGR of above 10% due to the growing adoption of advanced drones for gathering military intelligence. In this segment, the intelligence, surveillance & reconnaissance military UAV market will dominate the market share by 2024 as these drones are specially designed for such operations and offer real-time battlefield tracking of ongoing activities as well as enemy positions

The Europe military UAV market will grow at a CAGR of above 10% over the forecast period. The countries in the region are easing out the rules & regulations of civilian drones and showcasing a flexible approach in capitalizing drone technology to its optimum. The countries in the region are collaborating to expand their drone industry market growth. For instance, in May 2015, Italy, France, and Germany agreed to develop a European drone program for security and surveillance, thereby reducing reliance on the U.S. and Israeli technologies. Under the drone surveillance project, the companies developed a medium-altitude, long-endurance drone that can fly at an altitude of up to 9,000 meters.

The military UAV market is dominated by established drone manufacturers as well as emerging drone manufacturing companies focusing on new product developments. For example, in October 2017, BAE Systems teamed up with Cranfield University for developing a hybrid drone that could switch between rotary-wing and fixed-wing modes. The drone is also capable to work with different launch and recovery settings. In October 2017, Boeing invested in a drone startup firm, Earth Autonomy, that develops autonomous solutions for aerospace manufacturers using unmanned drones to inspect tunnels, power plants, and crops to explore future products.

The military UAV market research report includes in-depth coverage of the industry with estimates & forecast in terms of fleet size in units and revenue in USD from 2013 to 2024 for the following segments: