Military Drone Market size estimated at USD 5 billion in 2016 with a fleet size of over 13 thousand units and is anticipated to grow at around 12% CAGR from 2017 to 2024. 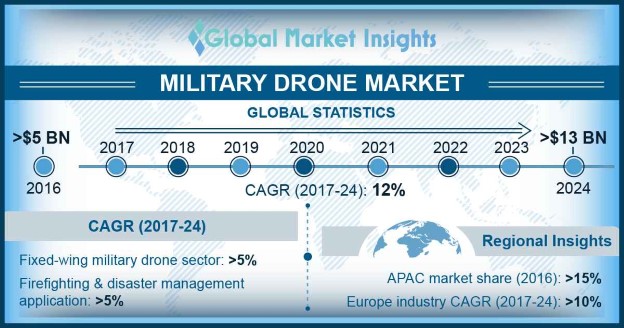 The demand for the military drone market is expected to accelerate over the forecast timeline due to the rising need for drone technology for surveillance and reconnaissance activities. The growing number of internal and external threats has compelled the government to use aerial imaging platforms to tackle challenging situations and promote public safety. Government agencies worldwide are supporting various drone manufacturers that develop high-tech drones to boost public safety. For instance, in December 2017, the French Defense Agency financed Elistair’s Airwatch project, a small dronebox for aerial surveillance. The system offers aerial surveillance support for crisis management, firefighting, law enforcement, and perimeter security. Rapid advancements in drone technology to facilitate high-level ISR and combat capabilities will also spur market growth.

The fixed-wing product segment is projected to exhibit a growth rate of over 5% from 2017 to 2024 due to its widespread adoption for defense operations. These drones are simple in structure, which ensures that the drone is more efficient to aerodynamics, offering the benefit of long flight duration at high speeds. These drones can also carry huge payloads over long-distances due to which the demand for these drones will increase over the estimated timespan. 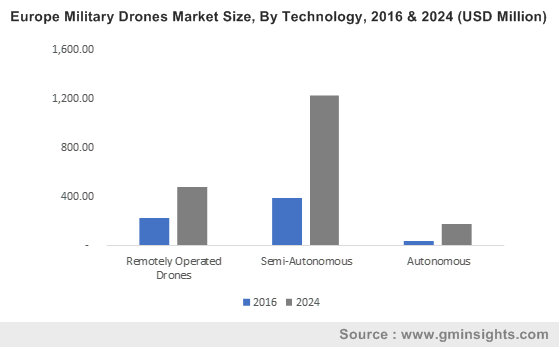 The remotely operated military drone market will hold a market share of above 15% by 2024 due to the extensive usage of such drones in the aviation industry owing to stringent regulations followed by aviation authorities with the protocol of Line of Sight (LOS) employed mandatorily. Remotely operated drones comprise conventional features of operating a machine through remotes. This ensures that the drone is completely under the vision of the operator, making the operator responsible for the operation of the drone in the air.

The Visual Line of Sight (VLOS) market is estimated to hold a market share of over 25% by 2024 due to the rising use of VLOS drones by various government applications including police operations, traffic monitoring, and firefighting & disaster management applications. Regulatory authorities globally are introducing various VLOS regulations regardless of whether drones are used for recreational or commercial purposes which will contribute to market growth. However, the growing inclination toward the Beyond Visual Line of Sight (BVLOS) drones as they bring efficiency and speed up the data collection process will hamper the VLOS market growth. 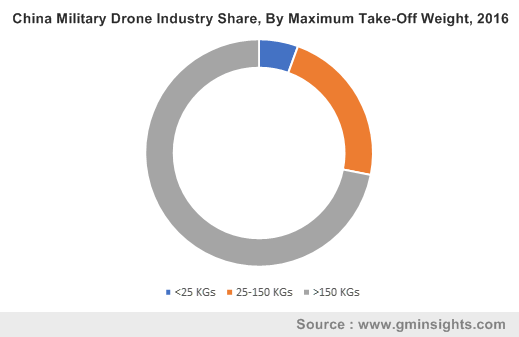 The market for the maximum take-off weight of more than 150 Kgs is estimated to grow at a CAGR of around 10% over the forecast timeline. The rising adoption of drones with a high payload capacity to support critical missions including search & rescue operations, surveillance, and traffic monitoring will fuel military drones market growth. The growing need among military organizations for High Altitude Low Endurance (HALE) drones will also augment market growth.

The government application segment is expected to witness the fastest growth rate due to the increasing usage of drone technology for managing administrative functions and public services to ensure accelerated service delivery to citizens. In this segment, the firefighting & disaster management application is projected to hold a market share of above 5% by 2024. Aerial imaging platforms are being extensively used for disaster response applications. For example, in September 2016, the emergency services in Italy used high-tech drones provided by the European Commission-run project for conducting search & rescue operations of damaged towns.

Asia Pacific will account for more than 15% of the military drone market share by 2024 due to growing investments in new drone technologies for developing high-tech drones to support military applications. Countries including China, Japan, India, and Australia are witnessing huge adoption of drones for the defense and government sector. For instance, in December 2017, the Chinese Military deployed reconnaissance-attack drones, Yilong-2 for spying purpose. The market growth in the region is also supported by the presence of various number of drone manufacturers who are continuously investing in advanced technologies to develop drones.

The companies present in the military drone industry are developing new drones and focusing on strategic partnerships to gain a competitive market share. In September 2017, Lockheed Martin and Elbit Systems entered into a partnership on a Maritime Electronic Warfare Programme (MEWP) for the Royal Navy. The partnership enabled the companies to share their capabilities in marine technology to provide a highly capable solution to address the needs of the UK’s Royal Navy. Some companies are also emphasizing on acquisitions to enhance their existing drone capabilities and meet future challenges in advanced UAV technologies. In January 2015, Raytheon acquired Sensintel to enhance its growth prospects and advanced capabilities in the UAS business.

Traditionally, drones were known as a sophisticated military technology or a hobbyist’s tool used for capturing images, events, and city spaces. With technological advancement, businesses across various industries have realized their potential in different commercial applications, beyond basic surveillance, photography or videos. They are extensively used for various applications including carrying out surveillance operations and search & rescue operations. With rapid investments in the drone industry, the market is expected to witness a sharp growth over the forecast timeline.

The market size of military drone was estimated at USD 5 billion in 2016.
The industry share of military drone is anticipated to grow at around 12% CAGR to 2024.
Asia Pacific will account for more than 15% market share by 2024 owing to their higher adoption in defense applications across China, India, Japan, and Australia, as well as the presence of advanced drone manufacturing companies.
The fixed-wing product segment will exhibit a growth rate of over 5% till 2024 due to advantages like superior aerodynamics, longer flight duration at high speed and the ability to carry heavier payloads across long distances.
The demand for remotely operated technology segment is due to its extensive usage in aviation industry on account of stringent regulations followed by aviation authorities with the protocol of Line of Sight (LOS) employed mandatorily.
Some of the major vendors are Lockheed Martin, Boeing, BAE Systems, Inc., Northrop Grumman, Israel Aerospace Industries Ltd., Aerovironment, Inc., China Aerospace, Leonardo, General Atomic, and Textron Systems.
Customize this Report
Inquiry Before Buying