Magnetic Sensors Market Size worth over $3.5bn by 2025

Magnetic Sensors Market shipments estimated at 3 billion units in 2018 and are expected to register gains at more than 5% during the forecast timeline; according to a new research report by Global Market Insights, Inc. The global industry revenue will cross USD 3.5 billion by 2025.

The increasing implementation of navigation systems in numerous applications including smartphones, tablets, gaming consoles, automobiles and commercial services, such as transportation and delivery services, is driving the magnetic sensors market. These components provide an effective way to measure multiple mechanical quantities including speed sensing, position sensing, and angle of rotation. These sensors do not require physical contact to detect the quantities, making them highly durable and offer a longer life. Other advantages, such as very low power consumption, compact size, and sustainability at different environmental conditions, are resulting in the widespread adoption of these components, augmenting the market.

Giant Magnetoresistance (GMR) technology is expected to considerably influence the magnetic sensors market as there is a growing preference for these components in biosensors, hard disk drives and microelectromechanical systems. They are highly preferred for applications requiring the measurement of low magnetic fields specifically in small volumes. This technology works by displaying the change in their resistance depending on the external magnetic field and provide better feasibility of fabrication. These can be integrated with several standard technologies, such as CMOS chips, thereby increasing their adoption and propelling the market growth. Some of the devices implementing GMR sensors are CMOS standard microelectronics, current strips, and coils. 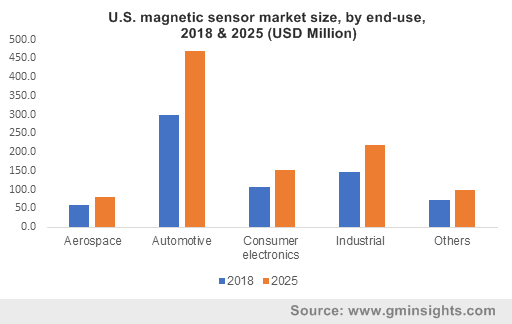 The aerospace industry will significantly contribute to the growth of the magnetic sensors market. They are integrated in aircraft equipment and play a vital role in determining aircraft direction by measuring the earth’s magnetic field. These sensors are also used along with the magnets as safety interlocks to ensure that the components of aircraft are properly positioned. The demand in other applications, such as for tracking position of rotating components and measuring the alignment between moving aircraft components, will propel the industry growth for applications in the aerospace industry. Moreover, the aerospace industry is witnessing significant growth particularly in the U.S. According to the U.S. Department of Commerce, in 2018, the U.S. aerospace industry contributed USD 151 billion to export sales of the country, providing high growth potential to the market.

Europe is one of the major regions in the magnetic sensors market particularly due to the presence of large automotive industry and several automotive manufacturers including Volkswagen, Mercedes-Benz, BMW, and others. According to the European Automobile Manufacturers Association, 19.6 million motor vehicles were manufactured in Europe in 2017, contributing to 20% of the global production. The European automotive manufacturers are highly inclined towards implementing a greater number of features in cars owing to the demand for premium automobiles and the presence of high-income population. Other factors, such as the growing trend of connected cars, IoT, and autonomous driving vehicles, implementing the navigation and tracking systems will create growth opportunities for the market in the region.

The magnetic sensors market is facing some challenges, which can limit the growth to some extent. One of the restraining factors for the market is the technological drawbacks of some of the sensor technologies, which can affect accuracy and performance. For example, the hall effect-based sensors are not capable of measuring the current flow for distance more than 10 cm. This issue can be overcome by using very strong magnets to generate very wide magnetic fields. However, it will add to the design difficulties and increase the cost. Accuracy is another concern with hall effect sensors as the determined values can be affected by external magnetic fields. They are sensitive to the environment and can be affected by magnetic fields generated by earth, power lines, and others, affecting the industry growth.

The magnetic sensors market research report includes in-depth coverage of the industry with estimates & forecasts in terms of revenue & shipments in USD and shipment in Units from 2015 to 2025 for the following segments:

Magnetic Sensor Market
Contact Us  Request Free Sample
We use cookies to enhance your experience. By continuing to visit this site you agree to our use of cookies. More info X