Less Lethal Ammunition Market size is expected to exceed USD 1.2 billion by the end of 2027, according to a new market research report published by the Global Market Insights Inc.

The rising recreational sports activities such as paintball sports, air gun events have amplified the use of these ammunitions. Moreover, many armed forces are also using paintball guns for supplement military and other military exercises with the allied forces thereby supporting less lethal ammunition market growth. 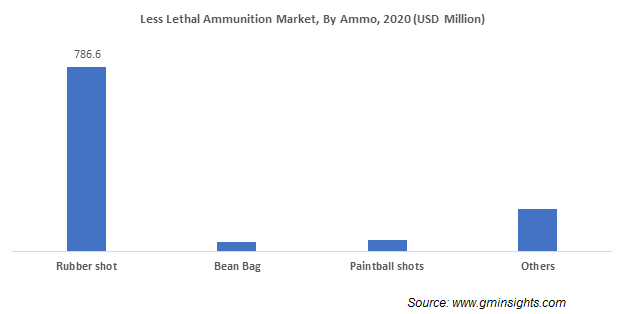 Recent adoption of less lethal technologies has been increased by various armed forces for violent individuals or groups. The Australian Defence Force used the bean bag type ammunitions, when they involved in non-combatant or peacekeeping actions in areas such as Bougainville and Timor. The law enforcement agencies utilize these products where the usage of lethal weapon would be illegal, which is positively influencing the market expansion.

The paintball shots type ammo is projected to witness around 1.5% CAGR through 2027. The paintball shots are increasingly adopted by the various armed forces during the military exercise to have limited injuries without comprising the difficulty level. Additionally, various governments authorities have entered into less lethal weapons research & development and obtaining solution for the asymmetric warfare, and crowd control. Increasing paintball sports industry across Latin America and Asia Pacific will fuel the demand for paintball gun.

Bean bag type less lethal ammunition is likely to generate more than USD 45 million revenue by 2027. This is mainly attributed to multiple feature of the bean bag round such as ease of operations, it has no penetration but will result in a muscle spasm, with minimum long-term trauma.

Asia Pacific account for above 30% of the less lethal ammunition market share in 2020 driven by rising border violence and disturbances due to public activists are cumulative the usage of these bullets among the police and paramilitary forces across the region. The increasing political unrest and rising clashes related to castes across various countries, providing lucrative market growth opportunities.