Home > Pressrelease > IoT Gateway Devices Market worth over $20bn by 2027

IoT Gateway Devices Market size is set to surpass USD 20 billion by 2027, according to a new research report by Global Market Insights Inc.

Increasing government initiatives for the development of smart city projects across developing economies, such as India, Malaysia, and the Philippines, are expected to support the market growth. According to the March 2021 press release by the India Brand Equity Foundation, the Government of India announced to develop 100 smart cities in the country with projected investment of around USD 28.31 billion by 2023. These smart cities are poised to be incorporated with various IoT solutions such as smart traffic controllers, public Wi-Fi hotspots, and connected mobility & transportation infrastructure. Such large-scale smart city projects will fuel the adoption of IoT gateway devices in the market over the forecast timeline.

Growing cyber-attacks and data protection concerns across enterprises are slated to restrain the market expansion. Various SMEs and IT enterprises are incorporating cloud & IoT technologies in their office premises. Through these technologies wireless devices, such as laptops, smartphones, or tablets, can access, control, or monitor critical data over internal servers, exposing crucial data. This data from the IoT ecosystem may lead to several cyber-attacks, increasing the security concerns. Due to these factors, companies are limiting the acceptance of wireless IoT gateway devices in their office premises, restraining the industry growth. 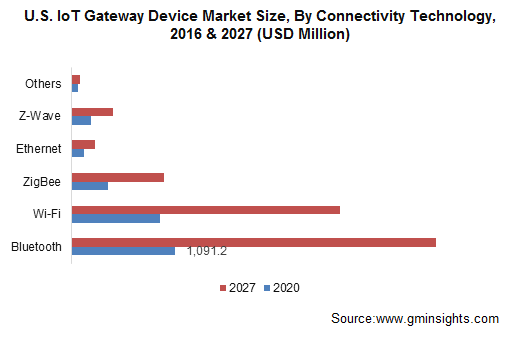 The Wi-Fi segment is estimated to witness 15.5% growth rate through 2027 impelled by the technological advancements in Wi-Fi 6 and Wi-Fi 6E protocol based IoT gateway devices in the industry. IoT gateways with Wi-Fi 6 connectivity are based on the IEEE 802.11 ax standards and offer a high data transmission rate of up to 9.6 Gbps. Owing to the aforementioned benefits, market players are focusing on integrating Wi-Fi 6 standards into their products to stay competitive in the market.

The memory segment held 25% of the market share in 2020 and will grow at a CAGR of 16% by 2027 on account of the increasing usage of semiconductor memory in IoT gateway devices for various applications such as data retention and safety applications. Fluctuations in internet connectivity may lead to critical data losses across the IoT ecosystem. The incorporation of semiconductor memory in IoT gateways aids in the temporary storage of important data sets and prevents further data losses. Market players are emphasizing on integrating technically advanced memory components in their gateway devices to improve their data processing & data retention capacities.

The automotive segment captured 23% of revenue share in 2020 and is estimated to attain a CAGR of 13% till 2027 led by the growing integration of In-Vehicle Infotainment (IVI) systems, advanced telematics, and instrument clusters into vehicles. IoT gateways help these automotive systems to connect over the cloud with an external environment. The post-COVID-19 pandemic has led major automotive OEMs across developed & emerging economies to increase their vehicle production capacities to cater to the high demand in the market. According to the International Organization of Motor Vehicle Manufacturers, global automotive production observed 16.9% y-o-y growth in Q1 2021 compared to Q1 2020. The vehicle production increased from 18.03 million in Q1 2020 to 21.08 million in Q1 2021. This will increase the uptake of In-Vehicle Infotainment (IVI) systems across the automotive sector, thus supporting the industry expansion over the forecast period.

Key players operating in the market include Dell Technologies, Inc., Huawei Technologies Co., Advantech Co., Ltd., Intel Corporation, Ltd., ADLINK Technology Inc., Laird Connectivity, Inc., and Cisco Systems Inc., among others. These companies are continuously involved in new product development and innovations to gain a competitive advantage over other participants in the industry.