Semiconductor Memory Market size exceeded USD 100 billion in 2019 and is expected to grow at a CAGR of over 13.8% from 2020 to 2026. The growing demand for smart devices and mobile phones worldwide will boost the market revenue.

Moreover, rising disposable income in developing economies and growing demand for internet across the globe will drive the market share. According to the GSM Association, the number of mobile subscribers worldwide has reached 5.1 billion in 2018, which is around 67% of the global population. Furthermore, technological advancements in smartphones and gaming consoles require high data capabilities, accelerating the demand for RAM and boosting the semiconductor memory market growth.

The growing establishment of data centers worldwide due to high storage requirements from several industries will accelerate the market for semiconductor memory devices. The rising adoption for colocation data centers and hyperscale data in developed economies on account of growing demand from mega facilities for access, management, and storage of massive business data is accelerating the market demand. This further encourages global players to establish their facilities, adding an advantage to industry growth.

The rising adoption of advanced safety systems in vehicles, such as airbags, ADAS, lighting, and braking, employ various sensors and ECUs that require highly efficient memory components, driving the market growth. The process analytical systems and cameras used in ADAS systems require a huge amount of flash and DRAM memory, adding an opportunity for the market.

Manufacturers in the automotive industry are increasingly adopting these memory solutions for their safety systems owing to its performance and low power consumption benefits. This will add as an advantage for the players in the industry.

The in-vehicle communication system is also witnessing several requirements for non-volatile memory such as NAND flash. This helps in storing several security certificates and developing efficient wireless connections. Companies manufacturing semiconductor memory are focusing on offering products depending on the requirements of auto manufacturers to gain a competitive edge in the market.

The RAM type held a market share of over 58.2% in 2019. This is due to its low power consumption and cost-effective advantages, increasing its adaptability in various consumer electronics applications.

Several players are launching innovative memory solutions, catering to the high demand in the automotive industry. For example, in November 2018, Micron Technology, Inc., announced a collaboration with BMW Group to enhance the development of automotive memory solutions. This collaboration will help the company to leverage its storage & memory technology in the automobile sector along with broadening its portfolio of NAND, DRAM, and NOR technologies.

The consumer electronics segment held a major share in the semiconductor memory market, growing at around 14.5% till 2026. This is majorly attributed to rising adoption of IoT & connected technologies and increasing consumer disposable income worldwide. The manufacturers in the consumer electronics sector are collaborating with technology providers to deliver high-tech products to the customers.

For instance, in September 2019, Fujitsu Semiconductor Limited along with Panasonic Semiconductor Solutions Co., Ltd. announced the availability of eight-Mbit ReRAM, a non-volatile memory compatible with EEPROM & SPI interface. It is a compact size and minimal battery consumption semiconductor memory used in wearable devices including smart bands, smartwatches, and hearing aids.

The rising adoption of wearable devices in traveling, hospitality services, and healthcare applications, such as fitness monitoring, heart care, chronic disease management, is creating lucrative growth opportunities for the market. Airline companies also utilize wearable devices to ease boarding procedures of the passengers. SITA, an Airline IT Company, is testing out the use of these devices on its employees to test & determine the effectiveness of these gadgets.

Walt Disney resorts have developed and distributed MagicBand to 20 million customers. According to the U.S. Traveler Technology Survey Sixth Edition, 2016, 13% of travelers own smartwatches and 17% own fitness trackers. 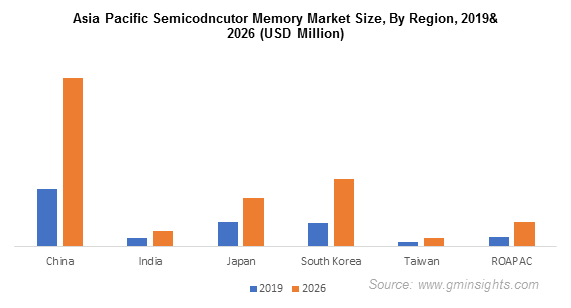 The region also has a high advantage in the industry over North America owing to availability of raw materials and components at a low price. These factors create high growth opportunities for market players in the region.

The rising data center investments in countries including India, Singapore, and Indonesia are creating a high demand for semiconductor memory in the region. Several major players are adopting market strategies to enhance their footprint in the region owing to ease in availability of raw materials and at lower cost.

In September 2017, Amazon announced its plan to invest USD 924 million in data center facilities in Indonesia for the next 10 years. The company plans to introduce its cloud computing unit of Amazon Web Services in the Indonesian market.

Market players of semiconductor memory are focusing on several strategic acquisitions to improve their market position and enhance the product portfolio. For instance, in May 2016, Western Digital announced the acquisition of SanDisk Corporation, which enhanced its product portfolio.

The major players in the industry are also emphasizing several strategic initiatives, such as acquisition and new product launches, to gain a competitive edge in the market. For instance, in March 2018, Renesas launched its on-chip flash memory microcontroller, featuring advanced 28nm embedded flash technology developed for automotive applications.

The semiconductor memory market research report includes in-depth coverage of the industry with estimates & forecast in terms of revenue in USD from 2015 to 2026 for the following segments:

The market size of semiconductor memory exceeded USD 100 billion in 2019..
The industry share of semiconductor memory is expected to grow at a CAGR of over 13.8% from 2020 to 2026.
The APAC market held around 49.71% revenue share in 2019 and is poised witness 15.3% growth through 2026, impelled by rising production of memory solutions and consumer electronics products in China, India, and South Korea.
The consumer electronics segment will hold a major share in the market, growing at a CAGR of around 14.5% till 2026. This is majorly due to rising adoption of IoT & connected technologies and increasing consumer disposable income worldwide.
Some of the leading market players include Microchip Technology, Inc., SK Hynix, Inc., Samsung Electronics Co., Ltd., Cypress Semiconductor Corporation, Intel Corporation, NXP Semiconductors, Micron Technology, Inc., and Renesas Electronics Corporation.