Intent-based Networking Market size is set to reach USD 4 billion by 2025; according to a new research report by Global Market Insights, Inc.

Intent-based networking market growth is attributed by an increase in the demand for commercialization of the next generation 5G technology. The commercialization of 5G technology will help service providers to create multiple customized virtual private networks for specific applications and customers. The network slicing and enhanced bandwidth capabilities of 5G will aid enterprises in the adoption of BYOD trend as similar network policies can be applied to employees’ devices. Intent-based networking technology enables enterprises to have control over the segmentation, malware detection, Quality of Service (QoS), content filtering, and software-defined access to the network. Networking solution providers are focusing on extending their support for 5G technology. For instance, in February 2019, Verizon partnered with Cisco to extend its support for 5G devices on Cisco's SD-WAN platform using its virtual network services. This partnership helped the company to allow enterprises to use its virtualization services based on Cisco’s intent-driven networking capabilities.

The networking hardware segment in the intent-based networking market is expected to grow at a CAGR of over 30% during the forecast period due to the increase in data-centric applications. Changing business requirements with a rapidly evolving technological landscape enable enterprises to increase their number of networking hardware components such as routers and switches. These networking components need to be configured properly according to enterprises’ business needs. Intent-based networking technology allows enterprises to automate the configuration of these network devices as per the business objectives. The network solution providers are also focusing on the development of robust networking hardware products to match the changing business demands. For instance, in January 2019, Cisco introduced industrial integrated service routers purpose-built for the IoT environment. These routers are powered by a modern operating system, IOS XE that supports intent-based networking across the branch, campus, and WAN. 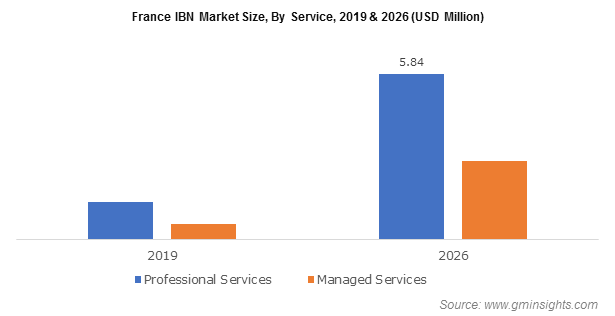 The cloud deployment model is expected to grow at a rate of over 32% during the forecast period due to rise in the adoption of cloud computing services across the enterprises. Enterprises are adopting public cloud deployment models in which a service provider makes resources, such as virtual machines and applications, available to customers over the internet. Network solution providers are developing cloud-based intent-based networking solutions to support the cloud data center. For instance, in June 2018, Huawei, a leading network equipment manufacturer, launched intent-driven networking for the CloudFabric solution. This new product launch helped the company to offer a solution that supports enterprises to achieve low latency and ultra-broadband physical network connectivity with zero packet loss to transform data centers.

The IT & telecom segment is expected to hold a major intent-based networking market share of over 25% by 2025 due to increase in the use of bandwidth-intensive applications. These bandwidth-intensive applications enable enterprises to provide a robust networking solution to implement their networking policies. Intent-based networking technology helps companies to take advantage of the broadband to provide high-quality services. Enterprise IT challenges are rapidly growing with changing business & technology needs, such as the adoption of cloud platforms, rise in security threats, and decentralized manageability of various branches. This facilitates the need for advanced networking solutions, enabling them to address these challenges.

The APAC intent-based networking market is expected to grow at a CAGR of over 31% due to growing digitalization across SMEs. The enterprises in the region are deploying NFV technology to achieve elastic scaling of capacity and rapid & flexible deployment of applications & services. This integration makes the network infrastructure more complex. The intent-driven networking technology helps in simplifying network operations by real-time modifying, re-routing, and re-configuring virtual services on demand. Network solution providers in the region are deploying the virtualization network in the region to tap the growing intent-based networking market. For instance, in July 2018, VMware launched a new Virtual Cloud Network in Malaysia to promote digitalization in the country. This expansion helped the company to deliver a solution, which enables businesses to create an end-to-end software-based network architecture that can deliver services to applications and data regardless of their location.

The intent-based networking market research report includes in-depth coverage of the industry with estimates & forecast in terms of revenue in USD from 2016 to 2025, for the following segments: