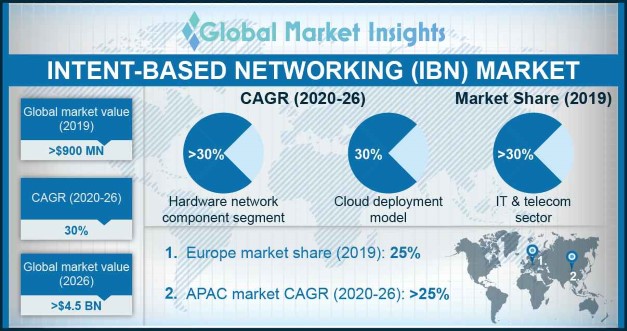 The growing demand for aligning network policies as per business goals is a major factor contributing to the intent-based networking (IBN) market growth. Enterprises are using machine learning algorithms across the globe to automate and optimize their network operations, preventing their network infrastructure from external threats. The rising number of wireless network devices in the enterprise is enabling enterprises to deploy an effective network and management solution. The enterprises are deploying intent-driven solutions to reduce the network downtime and delivery time by automatically configuring network components with minimal human intervention. The increase in the adoption of cloud technology across data centers to support their applications, regardless of the server type and the deployment model is another factor fueling the market growth. Rising investments in startups focused on the development of IBN solutions are promoting new companies to enter the market.

The software segment is expected to hold a major intent-based networking market share of over 60% by 2025 due to increase in the demand for improving network availability and agility across enterprises. The intent-driven networking software configures appropriate network changes across the existing network infrastructure using network automation or orchestration, which ensures the alignment of network policies as per the business intent using policy-based automation, network analytics, and machine learning. The networking hardware component segment is expected to grow at a CAGR of over 30% due to the rise in the demand for robust network hardware components to match the changing business demands. The growing penetration of wireless devices is enabling enterprises to deploy robust networking components that can automatically configure as per changes in business intent. 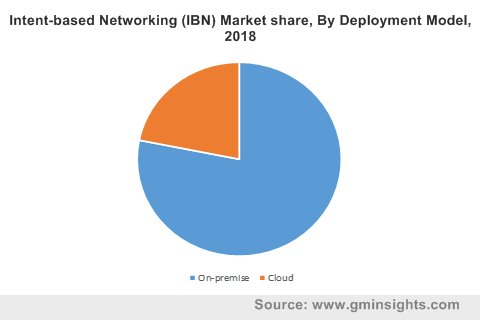 The on-premise deployment model held a major IBN market share of over 70% in 2018 due to the increased focus of SMEs on constructing their network infrastructure locally. The on-premise deployment helps enterprises to provide access to their application & data more securely. This deployment also provides better recovery and backup functionality in case of any disaster. The cloud-based deployment model is expected to grow at a CAGR of over 30% during the forecast period due to the adoption of cloud computing technology across enterprises. The cloud deployment model helps enterprises to enhance their network performance using real-time traffic shaping and load balancing functions along with the increased reliability and performance of cloud applications. 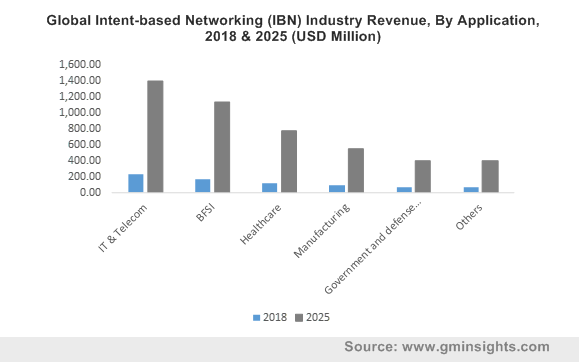 The IT & telecom segment is expected to hold a intent-based networking (IBN) market share of over 30% by 2025 due to the rising demand for high-performance applications. The rising penetration of smartphones and other wireless devices is resulting in increase in the use of bandwidth-intensive applications. This puts a strain on telecom operators, faced with inflexible MPLS bandwidth constraints. To address this issue, they need advance network technology, which allows them to take advantage of the broadband to provide high-quality services. The BFSI segment is expected to grow at a CAGR of over 30% during the forecast period due to the increase in the number of cyber threats. Network segmentation, security, and visibility capabilities of intent-driven networking technology are helping in its rising adoption in the BFSI sector.

North America is projected to show a maximum intent-based networking (IBN) market share of over 50% by 2025 due to growing broadband penetration in the region. For instance, according to the International Telecommunication Union (ITU), a specialized agency of the United Nations responsible for issues on ICT, 70% of the population in North America was using the internet in 2018. Growing internet penetration is resulting in rise in the number of wireless devices that are vulnerable to external cyber threats. These cyber vulnerabilities are enabling enterprises to adopt an intent-driven networking solution into network security policies without affecting the business intent. Major network solution providers are focusing on expanding their intent-based networking product portfolio. For instance, in December 2017, Juniper Network expanded its Contrail portfolio with self-driving network along with Juniper Bots to simplify network operations by translating intent into an automated workflow. This expansion has helped the company to accelerate the adoption of intent-based networking.

Companies are also strategically collaborating with other technology companies to enhance their networking capability. For instance, in November 2018, Juniper Networks, Inc. partnered with HTBASE to integrate its solutions with HTBASE’s unique and disruptive platform for software-defined enterprise multi-cloud. This partnership enhances multi-cloud storage to strengthen Juniper’s network & compute orchestration capabilities of its contrail enterprise multi-cloud.

Traditional networking relies on Command Line Interface (CLI) to manually set policies for networking devices to achieve business objectives. This approach of setting & enforcing network policies was complex and involved high manual labor with traditional configuration management. This led to the adoption of intent-based networking, a form of network administration that uses machine learning and Artificial Intelligence (AI) to determine which device and route matches the business intention and makes appropriate changes automatically. This enabled enterprises to shift tow IBN technology to implement their network policies as per their business objectives. This technology also helps in automatically configuring network components with little human intervention as per business demands. This technology provides agility to the enterprise network infrastructure by reducing network downtime and delivery time.