HVDC Converters Market size is anticipated to surpass USD 13 Billion by 2025, as reported in the latest study by Global Market Insights, Inc.

Increasing concerns pertaining to grid stability and security of supply issues across the developing economies owing to rapid increase in peak demand will drive the HVDC converters market size. Ongoing investments to establish a sustainable electrical network in line with supportive regulatory reforms pertaining to the integration of renewable technologies will foster the industry growth.

Growing demand for an effective and efficient grid interconnection systems for an integration of renewable technologies, favored by rapid penetration of offshore wind farms will propel the HVDC converters market share. In 2018, according to Eurostat, Europe witnessed an installation of 2.6 GW of offshore wind energy capacity which is 18% higher from 2017. Operational safety and efficient power supply through minimizing overall transmission losses are some of the key features further accelerating the product adoption. 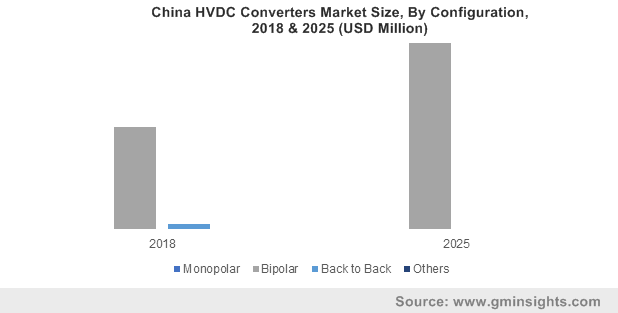 800kV-1,000 kV HVDC converters market is set to grow on account of ongoing deployment of large scale renewable power generation facilities at large distances from their load centers. For instance, in January 2017, Government of India has signed an agreement with ABB to build 800kV UHVDC transmission line for providing electricity access to over 80 million people.

LCC HVDC converters market is set to witness appreciable momentum on account of ongoing capital spending toward expansion of electrical infrastructure with large scale grid integration projects. For instance, in 2017, the Power Grid Corporation of India Limited (PGCIL) commissioned a 6,000 MW, 1,728 km long LCC HVDC link with an aim to connect the hydro-rich northeastern state to the nation. In addition, ongoing technological advancements across the industry will further boost the product deployment.

Rising focus toward security of supply issues in line with growing share of renewables transmission via national grids will significantly drive the back to back HVDC converters market size. Effectively interlinking two adjacent asynchronous AC networks minimizes carbon emissions and raises the systems efficiency which in turn will further propel the product deployment.

North America HVDC converters market will grow on account of ongoing investments toward the strengthening of aging power infrastructure across the developed economies. For instance, as per the Wisconsin Economic Development Corporation (WEDC), Canada will require investments of worth USD 350 billion in a time span of 20 years from 2017 to revamp its grid infrastructure. Furthermore, ongoing technological advancements coupled with surging investments toward the development of long-distance transmission networks will boost the product demand across the region.

Germany HVDC converters market size will witness robust growth owing to government measures to increase the cross-border electricity trade. In 2016, Siemens had been awarded USD 301.8 million contract by utilities Amprion and Elia for the development of two HVDC converter stations to effectively transfer power from Germany to Belgium.

HVDC converters market research report includes in-depth coverage of the industry with estimates & forecast in terms of MW, and USD from 2014 to 2025, for the following segments:

HVDC Converters Market
Contact Us  Request Free Sample
We use cookies to enhance your experience. By continuing to visit this site you agree to our use of cookies. More info X