Hemophilia Treatment Market size is set to exceed USD 14 billion by 2025; according to a new research study published by Global Market Insights, Inc.

Increasing global prevalence of hemophilia will drive the hemophilia treatment market in the upcoming years. According to the National Hemophilia Foundation, the worldwide incidence of hemophilia is around more than 400,000 and occurs in approximately 1 in 5,000 live male births. Rise in number of people suffering from hemophilia and increasing cases of genetic abnormalities will result in propelling the business growth. 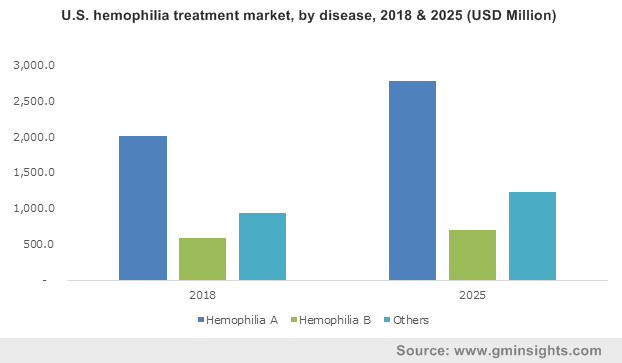 Lack of awareness among the patients regarding hemophilia and the treatment associated with it will be a major market growth impeding factor. A majority of hemophilic patients live in the developing countries, that has little or no access to hemophilia treatment, leading to increasing number of morbidity and mortality. Lack of awareness among people, low level of recognition and diagnosis of hemophilic patients, and dearth of skilled healthcare professionals will impede the business growth.

Hemophilia treatment in adult is projected to grow at 4.9% over the estimation period. According to the Center for Disease Control and Prevention (CDC), majority of the individuals develop hemophilia type A and B during the mid-age or elderly age and young women suffer from hemophilia in the later stages of pregnancy. Most individuals have relatively mild hemophilia stage and are not recognized until they are adults. Hence, increase in prevalence of hemophilia among the adults will enhance the industry growth in the near future.

Vasopressin was valued at USD 545.7 million in the year 2018. Increasing use of vasopressin  to prevent excessive bleeding will further boost the growth of hemophilia treatment market in the coming years. Vasopressin can be used to infuse the release of blood clotting factor as well as control bleeding and promote proper blood coagulation. According to a recent research study, it was found that vasopressin is quite effective in treating hemophilia. Hence, growing efficiency of vasopressin in the treatment of hemophilia will boost the market growth.

Injectable route of administration is estimated to witness significant growth of 5.0% in the near future. Majority of recombinants products such as antihemophilic factor or Factor VII are present in injectable form. Injectables are used to control and prevent bleeding episodes before surgery, as onset of action is rapid as compared to other forms. Injectables allow the insertion of drug directly into the systemic circulation. The direct interaction of medication with the blood will enhance the hemophilia treatment, thereby augmenting the market growth.

Hospitals as an end-use was valued at USD 3,169.2 million in the year 2018. Individuals with hemophilia will require specialized treatment that is available at hospitals. Patients with all types and severity of hemophilia can be treated in hospitals, as it has access to several kinds of medications required for the treatment along with presence of state-of art facilities. Additionally, the availability of registered medical practitioner along with reimbursement policies will make hospitals preferable over other healthcare settings.

U.S. hemophilia treatment market is estimated to grow at 4.1% during the forecast period. Increasing prevalence of hemophilia in the country, enhanced healthcare infrastructure and recent technological advancements in hemophilia treatment will propel the industry growth. Also, presence of renowned pharmaceutical companies such as Sanofi and Roche in the U.S. will foster the growth of hemophilia market.

Indian market was valued at USD 157.9 million in the year 2018. According to a recent study, it was observed that around 14,000 people suffering from hemophilia are registered at Hemophilia Federation of India. Hemophilia also remains one of the most under diagnosed diseases in India. Increasing prevalence of hemophilia, high cases of under-diagnosed hemophilia cases and improving healthcare infrastructure in the country will result in immense market growth.

Hemophilia treatment market research report includes in-depth coverage of the industry with estimates & forecast in terms of revenue in USD million from 2014 to 2025, for the following segments: