Growing prevalence of hemophilia across the globe will be one of the major market augmenting factors over the forthcoming years. As per the recent statistics published by Centers for Disease Control and Prevention (CDC), hemophilia A affects around 1 in 5,000 live male births in the U.S. Majority of the people with hemophilia are diagnosed at a young age. According to the CDC data, average age of hemophilia diagnosis in the U.S. is 36 months for mild hemophilia, 8 months for moderate hemophilia and 1 month for severe hemophilia. Hence, rise in number of people suffering from hemophilia will enhance the hemophilia treatment market growth in the near future. 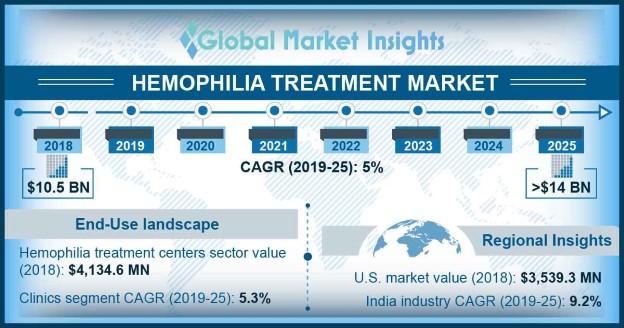 Rise in several government initiatives will augment the industry growth over the projection period. Organization including the World Hemophilia Organization along with governments of several countries carry out awareness and diagnosis programs. Government efforts to enhance public health and treat underprivileged people will result in boosting the hemophilia treatment market growth in the near future.

However, high cost of hemophilia medications will be one the major growth impeding factors. High investment, R&D, manufacturing and marketing of drugs by manufacturers is the reason for high cost of the products. High cost of products are unaffordable for the middle and lower income class families, thus resulting in restraining the business growth. 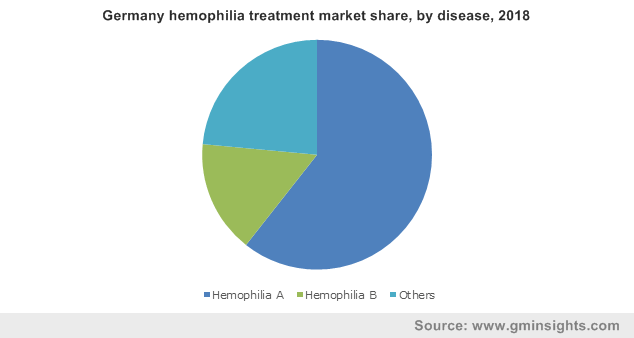 Hemophilia A treatment market was valued at USD 6,743.7 million in the year 2018. Hemophilia A is a common blood disorder and the prevalence rate is high in developing and underdeveloped regions. As per the recent statistics, around 19,000 people in India suffer from hemophilia and only 15% of the patients are registered. Increase in number of people suffering from hemophilia A and rise in awareness among the people regarding the treatment and medications of hemophilia will result in rise in demand and adoption rate of hemophilia drugs, fueling the business growth.

Extended half-life products market is estimated to witness a robust growth of 5.3% over the forecast period. Recent research and development has led to the production of new factor concentrates that are efficient and need less frequent injections. The reason for fewer injections are due to the increased half-life of the product. Hence, recent technological advancements and new product launches will lead to increase in demand and adoption rate of extended half-life products, thereby fueling the business growth.

Hemophilia treatment in pediatrics is projected to grow at 5.2% over the estimation period. Hemophilia is inherited diseases that are passed to children from gene located on X-chromosome. In approximately one third of children, no family history of hemophilia is found, and the disease occurs due to gene mutation. Children with hemophilia gene bruise easily, bleed more with surgeries and have frequent nose bleedings. According to the National Center for Biotechnology Information, severe form of factor deficiencies including hepatitis A and hepatitis B were diagnosed in the neonates with 52% and 68% of cases respectively. Hence, increase in prevalence of hemophilia in children will augment the hemophilia treatment market growth in the near future.

Factor replacement therapy market was valued at USD 9,574.2 million in the year 2018. As per the Medical and Scientific Advisory Council (MASAC) of National Hemophilia Foundation (NHF), the use of recombinant factor concentrates in children is quite effective as the recombinant factor does not contain actual human blood and cannot transmit harmful viruses including hepatitis. Hence, the use of factor replacement therapy is quite common due to direct infusion of clotting factors, resulting in boosting the segmental growth.

Nasal spray or intra nasal route of administration will grow at 6.0% over the forecast period. Drugs including vasopressin are required to be taken by patients for joint and muscle bleeds, and bleeding in mucous membranes of nose and mouth. Several advantages offered by nasal spray such as ease of use and user convenience will result in growing demand, thereby fueling the business growth.

Clinics as end-use is estimated to grow at 5.3% in the near future. Clinics provide fast-track treatment and infusion of factor concentrates to patients. Also, immediate and short-time treatment provided during the daytime to people with busy and hectic work schedule will enhance business growth in the near future. 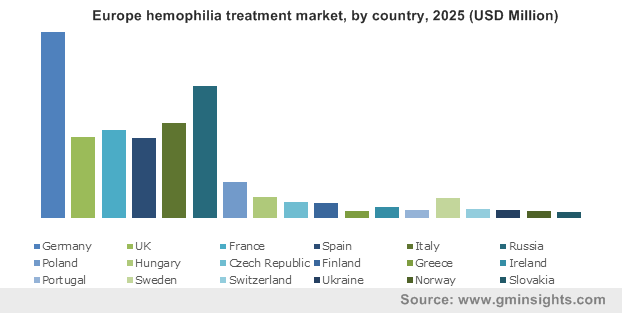 Hemophilia has been an extremely old and critical disease that the global population has been facing. People in ancient times have written and articulated about bleeding problems.  Some of the bleeding problems identified have been different as compared to others. But little they knew about blood clots and the disease caused by their deficiency. Until before World War II, doctors learned about hemophilia A and its cause due to deficiency of factor VIII.  Several other blood factors were recognized later on and Roman numeral names were given to avoid confusion. Hemophilia research has come a long way with scientists discovering human blood in different groups, hence helping blood transfusions to be more successful. In 1960s, Dr. Judith Pool discovered a procedure to freeze and thaw plasma to get a layer of factor-rich plasma called as cryoprecipitate.  Use of cryoprecipitate was the best way of stopping hemophilia bleeding.  Later on, the greatest breakthrough that came in hemophilia treatment was the development and introduction of factor concentrates.  These clotting factors can be freeze-dried to a powder that can be easily stored and consumed.  With the help of these factor concentrates, people suffering from hemophilia can be treated quickly with maximum efficiency.  Also, factor concentrates have helped people treat their bleedings at home or at work, resulting in people to lead normal lives. Also, development and introduction of new medications and technologies such as non-factor replacement therapy, extended half-life products, gene therapy, etc. will augment the growth of hemophilia treatment market growth in the near future.