Fundus Camera Market size is set to surpass USD 735 Million by 2027, according to a new research report by Global Market Insights Inc.

The increasing prevalence of eye disorders across the globe is anticipated to expand the fundus camera market progression. With a significant proportion of the aging population, the prevalence of eye disorders in the elderly population is slated to increase in the foreseeable future. As per the meta-analysis of population studies, in 2020, around 8.7% of individuals aged 65 years and above were suffering from age-related macular degeneration worldwide. According to the Macular Society, in 2018, around 600,000 people in the UK were affected by age-related macular degeneration (AMD). Hence, the growing burden of eye diseases has contributed to the greater awareness and focus on eye health, further fostering the demand for technologically advanced retinal cameras for precise eye screening and is, thereby estimated to augment the overall industry growth. 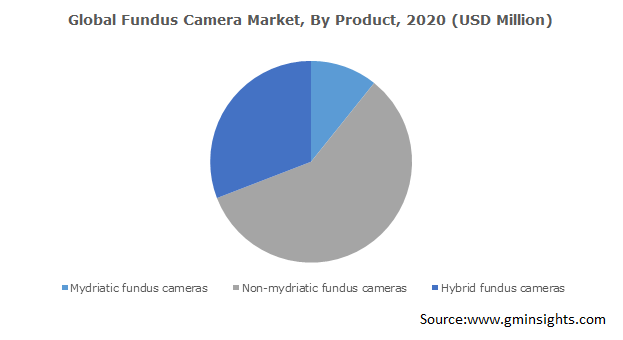 The hybrid fundus camera market held for 31% of revenue share in 2020 and is predicted to reach USD 226 million by 2027. The hybrid fundus cameras are a combination of both mydriatic and non-mydriatic and carry advantages of both types. With one touch, the user can switch between nonmydriatic and mydriatic modes. The incorporation of two technologies into one device reduces the need for purchasing two different devices, and that further increases the acceptance of hybrid cameras in the market globally. Recent technological advancements including the designing of hybrid fundus cameras integrated with EOS camera technology, fundus autofluorescence, and stereo photography system is set to accelerate the preference for hybrid retinal cameras significantly. Further, in the U.S., fundus photography procedures are covered by a Medicare insurance policy.

The hospitals segment in the fundus camera market was valued at more than USD 121 million in 2020. The well-established healthcare infrastructure of hospitals, growing number of multispecialty hospitals along with an increasing number of ophthalmic surgeries is propelling the segment growth across the globe. Government in developed regions highly invests in the healthcare domain, thus, the segment will grow significantly during the forecast timeframe. The accessibility to innovative technologies increases the usage and demand for fundus cameras in hospitals to provide optimal retinal imaging that allows the ophthalmologist to diagnose eye diseases efficiently. The adoption of advanced patient monitoring systems to improve patient care in hospitals is predicted to drive the patient preference for hospitals, thereby influencing the industry expansion. Hence, increasing hospital admissions with eye disorders and the demand for fundus cameras to monitor the progression of certain eye conditions will stimulate the demand for healthcare facilities.

China held a considerable revenue share in the APAC fundus camera market and will cross USD 41 million by 2027 owing to the rising prevalence of eye disorders. As per the article published in 2018, over 17.5 million people were visually impaired in China.  Thus, as the number of eye disease rises, there is a huge demand for these fundus cameras that are projected to fuel the industry value substantially. The Chinese government has employed numerous initiatives including the National Eye Health Plan (NEHP) pertaining to vision impairment to increase coverage, accessibility, and efficiency of eye care services. These initiatives are adopted by both government and private organizations that are further estimated to upsurge the market demand.