Foldable Display Market size is set to exceed USD 18 billion by 2025; according to a new research report by Global Market Insights, Inc. The global shipments are set to grow at a CAGR of over 85% between 2019 to 2025.

Foldable display market size is anticipated to grow at an exponential rate owing to the increasing inclination of smartphone manufacturers to integrate this novel innovation into their product offerings. Companies are foreseeing the technology as the next big thing for key differentiation in their products. Many companies have filed patents for their devices that will enable them to stabilize the falling smartphone market and captivate the attention of tech-savvy consumers creating growth opportunities for the market.

Apple is experimenting on this new transformational technology that will turn tablets to smartphones, notebooks to tablets, etc. In July 2018, Apple was granted a second patent for its folding iPhone prototype. The invention is a specialized display coating that will support foldable devices, fueling the foldable display market. The U.S. Patent and Trademark Office granted an Apple patent for its first foldable device in 2016. In the future, wearable mobile phones may emerge once the technology becomes mainstream. 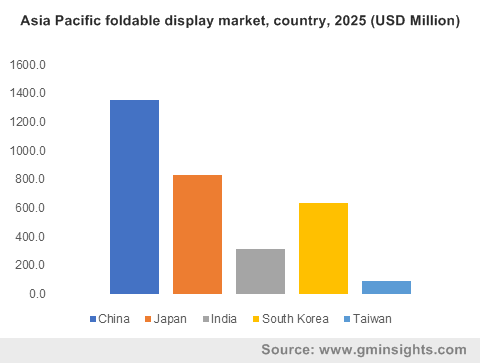 The key driver for the market is the growing support to this new technology from the industry players. Google is among the major supporters of the technology as it requires a compatible integration of hardware and software for foldable devices. The company is ensuring that there is a uniform API surface for the developers to support the future phones. Screen continuity, multi-resume, and multi-display are some of the software that Google is testing for this technology. The Android community has further extended support by modifying their applications that will be compatible with these advanced screens. In addition, Samsung and Apple are collaborating to optimize the UI experience for such devices. There are various technical solutions that need to be worked upon to provide unprecedented experience to consumers.

The commercialization of smartphones set by Samsung and Royole Corporation in 2019 will further create enormous growth prospects for the market. There is an intense competition among companies to launch its device early in the industry. Huawei, Xiaomi, and Lenovo are working rigorously in eliminating the drawbacks from their device prototypes. With the companies launching their products in the future, the foldable display market will witness lucrative growth. The smartphones are the initial step for the technology; which is further expected to explore its potential in other markets such as notebooks, wearables, TVs, etc. The market will be fueled by the technical capabilities of companies to incorporate them in their products with different designs, confirming their practicality and usefulness.

North America is the major market owing to the adoption of technological advancements and high disposable incomes of consumers, etc. The U.S. smartphone industry is one of the biggest industries in the world. The presence of major companies, such as Apple and Microsoft, which are at the forefront of integrating these displays is contributing to the regional growth.

The Asia Pacific foldable display market is expected to grow at a modest rate owing to the high associated cost. It will limit the adoption in low-income countries. As most of the consumers in these regions fall under the middle class, there will be a slow adoption for such devices. Samsung’s foldable smartphone is speculated to be launched in the market at a price of over USD 1,700 in 2019.

Major manufacturers in the market space are Samsung, BOI, Innolux, LG, Royole Corporation, among others. The industry is consolidated, and the players have been focusing on developing technologically-advanced products by investing in R&D. In October 2018, Royole Corporation launched its smartphone/tablet device in the market named FlexPai, which is available for developers at a price of over USD 1,300. Companies are also collaborating with smartphone manufacturers to commercialize their devices. For instance, BOE has collaborated with Huawei and other three companies in the market. Huawei is expected to launch its device in 2019.

Foldable display market research report includes in-depth coverage of the industry with estimates & forecasts in terms of revenue in USD and volume/shipments in Unit from 2018 to 2025, for the following segment: