Fog Computing Market size is set to reach USD 700 million by 2024; according to a new research report by Global Market Insights Inc.

The fog computing market is expected to witness lucrative growth due to the surge in the demand for fog computing solutions, supporting the operations of storage, computing, and networking services among end devices and data centers. The proliferation of connected devices has resulted in the generation of massive volumes of data, increasing the need for such solutions for the effective processing of data. These solutions reduce network latency and support high bandwidth to achieve better quality of services. Another factor augmenting market growth is the growing need among organizations to enhance data security being connected to multiple devices across a network. Fog computing provides better security to users as the data is analyzed locally and can be protected using the same methods followed in the IT environment.

The hardware market held a major market share in 2016 and is expected to maintain its dominant share of above 45% by 2024. The market growth is attributed to the declining prices of sensors, semiconductor devices, and storage devices. Advancements in the functionality and design of devices are also propelling the fog computing market demand. In this segment, the routers and switches market is expected to grow at a CAGR of over 70% due to the growing requirements to gather data from multiple sensors. The increasing demand for routers and switches is attributed to the increasing level of digital integration and supportive government initiatives for the development of smart cities across the globe. 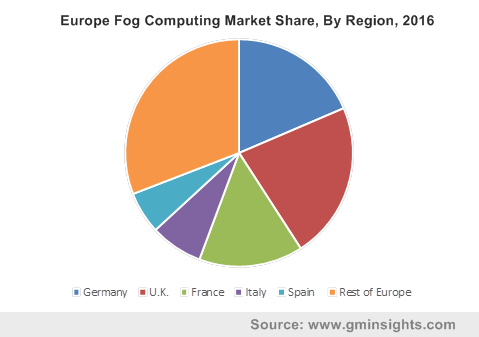 The fog as a service deployment model segment will exhibit the fastest growth rate at a CAGR of above 80% due to the rising demand for subscription-based pricing models. The increasing popularity of the outcome-based lease model is estimated to foster the growth of the FaaS product during the forecast timeline. Other benefits offered by this deployment model, such as no capital expenditure, flexibility, and scalability, will also augment the demand for the product.

The smart infrastructure application segment is expected to witness the growth rate of over 70% from 2017 to 2024. The rising digitization and favorable government initiatives globally for the development of smart cities will support the market growth over the forecast timeline. For example, the Indian government has announced its plans to build smart cities to establish an efficient & sustainable urban mobility and public transport system. The government has also formulated the National Electric Mobility Mission Plan 2020, which would necessitate the implementation of smart multimodal transport solutions. Fog computing can play an effective role in the smart infrastructure market in building control, security & surveillance systems, and access control, as well as in environmental monitoring applications.

The Europe fog computing market will grow at a CAGR of around 70% over the forecast timeline due to the increasing investments in IoT technology, due to the rapid adoption of cloud computing services and supportive government initiatives for the development of digital infrastructure. For instance, in May 2017, Fujitsu established its cloud infrastructure in Spain with the launch of its new cloud service K5. This new K5 technology-assisted Spanish companies in cutting-edge technologies such as big data, AI, and IoT, estimating to foster the market growth in the region. Also, the European Union (EU) launched the IoT European Platform Initiative (IoT-EPI) in 2016, under which seven IoT projects were funded by the Horizon 2020 program to foster the development of a new IoT ecosystem.

The fog computing industry is dominated by major cloud service providers including Microsoft, IBM, Intel, Cisco, and the emerging startups. Companies are forming strategic partnerships and emphasizing new product launches to expand their market share and gain a competitive edge over their competitors. For example, in March 2017, IBM introduced its new product, EDGE Analytics SDK, that enables data processing and analysis at the source. In May 2017, Foghorn announced the alliance with Yokogawa Electric Corporation with the sole purpose of developing and promoting fog computing solutions for IIoT.

The fog computing market research report includes in-depth coverage of the industry with estimates & forecast in terms of USD from 2015 to 2024, for the following segments:

The above information has been provided on a regional basis for the following: