Rising incidence of cardiopulmonary disease, chronic obstructive pulmonary disorder (COPD) and respiratory failure across the globe will offer robust potential to the global extracorporeal membrane oxygenation market growth during the forecast timeframe. As per the World Health Organization, around 65 million people suffer from chronic obstructive pulmonary disorder (COPD) annually and nearly 3 million die due to the condition every year globally. In 2016, about 17.9 million people died due to cardiovascular disease (CVD), accounting for around 31% of the total deaths worldwide. Growing adoption of unhealthy habits including tobacco smoking will lead to rising incidence of respiratory disorders propelling the market growth over the projected timeframe. 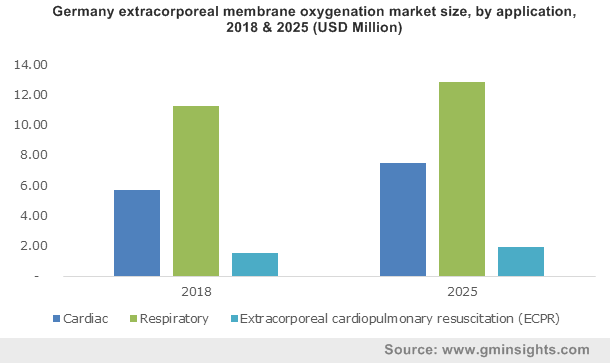 Venoarterial ECMO accounted for USD 131.3 million in the year 2018. Venoarterial shows greater survival rate in comparison to Veno-venous ECMO. It helps in facilitating gaseous exchange in patients suffering from respiratory and cardiac failure. Recent technological advancement in venoarterial ECMO machine has increased the chances of survival of the patients suffering from severe cardiovascular condition including cardiac arrest. The largest share of this segment can be attributed to rising respiratory failure cases, lung transplants and growing incidence of COPD. Veno-venous ECMO market is expected to show considerable growth during the forecast period due to factors such as lower risk of barotrauma and oxygen toxicity resulting in market growth in the near future.

Respiratory disease segment accounted for over 60% market share in 2018 and is anticipated to witness considerable growth during the forecast period. Respiratory diseases are the most commonly occurring diseases with high mortality rate. Thus, increasing cases of lung cancer, respiratory failure and lung implants has elevated the adoption of ECMO technology in the hospital thereby driving the extracorporeal membrane oxygenation market. Extracorporeal cardiopulmonary resuscitation segment will witness substantial market growth in the upcoming years, due to rise in use of ECMO in treating cardiac disorders coupled with technological advancements in the device.

Infant segment accounted for over USD 125 million in 2018. According to the CDC data, nearly 1% of newborn babies in the U.S. suffer from congenital heart defects (CHD). ECMO is the proven treatment procedure for various cardiac and respiratory disorders in the infants, that upsurge the survival rate up to 80-90% in the infants. Thus, adoption of extracorporeal membrane oxygenation technology in infants will grow significantly over the years.

U.S. market will witness considerable growth during the forecast timeframe to reach USD 113 million by 2025. Rising incidence of respiratory and cardiac disorders will act as major driving factors for the growth of U.S. market. Advanced healthcare facilities, increasing government funding and high technological adoption will propel the business growth over the projected timeframe.

Getinge, LivaNova, Medtronic, Terumo, Abbott, and Alung Technologies are some of the major players functioning in the global extracorporeal membrane oxygenation industry. Launch of advanced technology equipment’s and strategic alliances are the key strategies implemented by these firms to enhance their market footprint and achieve substantial market share. For instance, in October 2018, MC3 announced the launch of the Crescent for extracorporeal membrane oxygenation (ECMO) in the U.S. The new product launch strengthened the company’s position in the market as well as expanded its product portfolio.

Global extracorporeal membrane oxygenation market research report includes in-depth coverage of the industry with estimates & forecast in terms of revenue in USD million from 2014 to 2025, for the following segments: