Electrophysiology Market size is set to exceed USD 6.8 billion by 2025; according to a new research report by Global Market Insights.

Advancements in electrophysiology devices will impel the demand for diagnostic and ablation catheters over the forthcoming years. Development of safer and less-invasive catheters for the treatment of atrial fibrillation, that is the most commonly occurring arrhythmia, will spur the market growth. Biosense Webster, a part of Johnson & Johnson, developed a multi-electrode balloon radiofrequency ablation catheter, wherein each electrode has different power settings. The advanced catheter ensures no damage to the surrounding tissues. Emergence of such novel treatment devices along with rising inclination towards non-invasive procedures will drive the electrophysiology industry growth over the future years. 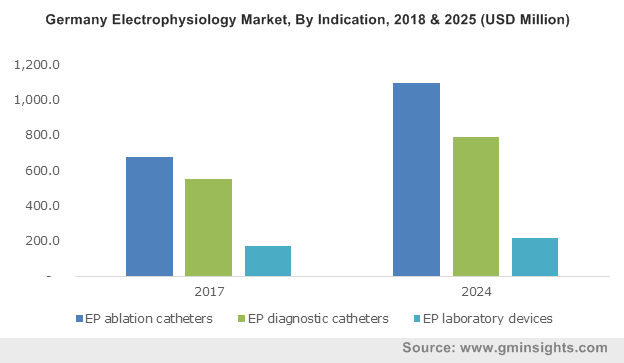 Electrophysiology Market research report includes in-depth coverage of the industry with estimates & forecast in terms of revenue in USD million from 2014 to 2025, for the following segments: