Drug of Abuse Testing Market size is set to exceed USD 4.8 billion by 2025; according to a new research report by Global Market Insights Inc.

Despite the industry and economic challenges, the global drug of abuse testing market continues to grow at a robust pace. The industry is becoming popular due to the growing need for rapid testing devices in law enforcement agencies, forensic laboratories, hospitals, and others. Nowadays, drug testing has become a routinized procedure in various departments. Police drug testing is widespread, locally controlled, variable across jurisdictions, and institutionalized. Presently, drug testing has become an increasingly important part of social lives, especially in the workplace. Workplace drug testing is a common practice in several public and private sector organizations in the U.S.

Furthermore, people are struggling to overcome challenges such as the spread of disease, drug-related crime, and rising rates of overdose deaths associated with drug use across the globe. Law enforcement is often responsible for ensuring that the rights of citizens are upheld and not infringed upon by others. Thus, growing drug of abuse testing in law enforcement agencies will increase the demand for drug testing devices in the near future, that will further propel the market size from 2019 to 2025. 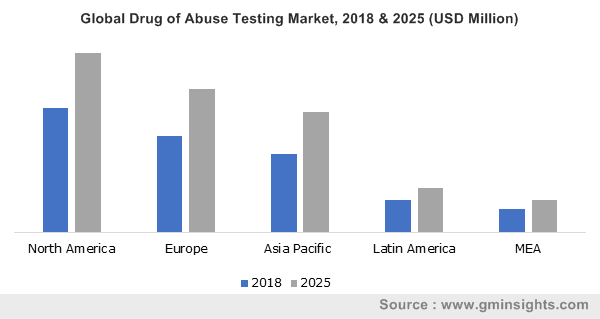 The rapid testing devices segment was valued around USD 1.1 billion in 2018 and is expected to grow significantly during the forthcoming years. Rapid testing devices provide on-site screening for urine specimen validity, drugs of abuse, and saliva alcohol, thereby allowing for immediate action on the results. Previously, laboratory testing for drugs of abuse was considered as the standard practice in various settings such as forensic and clinical. But now rapid testing devices are more preferred over analyzers as they provides rapid results and are generally easy-to-use.

The devices utilize immunoassay and other technologies on chromatographic test strips. Presently, a wide variety of these devices are available in both single and multi-assay configurations and different formats. Different types of formats include card or cassette, cup type, and dipstick type devices. Furthermore, the application and utility of these rapid testing devices are undergoing active regulatory review by numerous agencies for at-home use. Thus, increasing demand for rapid testing devices at home care settings will spur the segment growth over the forecast period.

Hair sample segment accounted for over USD 800 million in 2018, as hair is a powerful tool for the detection of drugs. Hair sample offers a continuing history of drug abuse by trapping biomarkers in the fibers of growing hair strand. Also, it helps in providing up to 3-month history of drug abuse that eventually augments the drug of abuse testing market expansion. Moreover, several benefits associated with hair sample such as easy collection, ideal for screening and appearance of drug biomarkers for longer duration will foster the segmental growth.

The forensic laboratories segment will witness around 5.7% CAGR during the forecast timeline. Across the globe, various commercial and government laboratories perform alcohol, drug, and other testing to manage workplace programs. Also, criminal or medicolegal investigations drug of abuse testing is performed to produce forensic results. Laboratory confirmation testing majorly provides legally defensible results for a court of law or industrial tribunal. Currently, the analysis of drugs based on hair samples has increasingly become very popular with major applications in forensic investigations. These major applications include drug-related deaths, child protection, drug-facilitated crime,  doping in sports, and in clinical toxicology. Thus, above-mentioned aspects will boost the segment growth over the forecast timeframe.

Australia drug of abuse testing market is estimated to witness over 6.2% CAGR owing to the availability of technologically advanced devices and an increase in drug-related problems in the country. The detection of drugs is considered to have an important role to play in several areas of society, such as suspicious deaths, sport, violent crime, and travel and work safety. Also, only from the past few years, Australia has begun to use drug testing technologies on a much wider scale, mainly within the criminal justice system.

Furthermore, the development and practical application of new drug detection technologies has the potential to play an increasingly important role in law enforcement to track the source of drugs entering Australia. However, further technological developments require significant investments in training and research, that might hinder the market growth.

Manufacturers focusing on creating awareness amongst the target population