Condom Market size is set to surpass USD 7 billion by 2025, according to a new research report by Global Market Insights.

Increasing incidence of sexually transmitted diseases such as HIV and gonorrhea will prove beneficial for the market growth. According to WHO, in 2018, 37.9 million people are suffering from HIV. HIV is one of the major diseases that adversely affect the immune system causing distortion in human’s lifestyle. The growing awareness about STDs and HIV has escalated the demand for contraceptives. Condoms are an effective and efficient method of contraception that generally protects against sexually transmitted diseases. As a result, rising awareness amongst the population regarding benefits of contraceptives will boost the market expansion in the coming years.

Favorable initiatives undertaken by the government to curb target population will accelerate demand for contraceptives in the near future. Initiatives such as the National AIDS Control Program (NACP) undertaken by the Indian government have led to maximum access to free contraceptives in vulnerable groups. Moreover, these programs are emphasizing on aspects such as creating demand and ensuring the availability of protection sheath. Also, social marketing has increased awareness amongst adolescents, sex workers that will substantially propel its demand over the forecast timeframe. However, social stigma in developing countries may hamper the industry growth to a certain extent.

Natural condom market is anticipated to witness more than 7% growth rate by 2025. People sensitive towards foreign materials often prefer natural material as they are made from lamb cecum. The effective usage of these protection sheath contraceptives prevents pregnancy. In addition, natural male and female condoms have benefits over synthetic variant such as it does not break unlike plastic material. 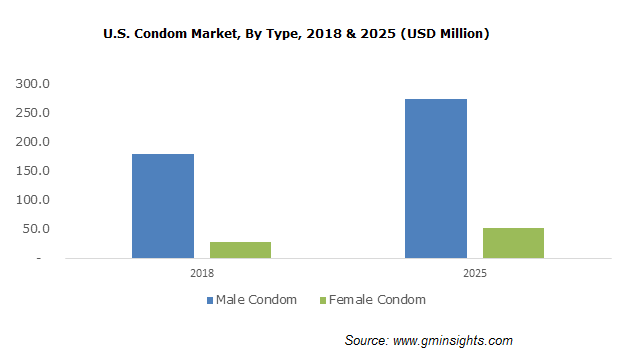 Male condoms segment dominated more than 85% of revenue share in 2018. Male condoms act as a shield from acquiring sexually transmitted infections such as chlamydia, gonorrhea, and HIV. It provides more protection from unwanted pregnancy as compared to female condoms. Additionally, it can be used easily and have no complications like female products. These benefits of male condoms will surge its demand thereby fueling the segment growth in the coming years.

Retail segment accounted for around USD 1.5 billion in 2018. The increasing government initiatives had ensured easy access to condoms. As a result, it is easily available in specialty and drug stores, supermarkets and hypermarkets.

Institutional segment in the condom market is estimated to attain a CAGR of 8% till 2025. The government is actively investing in several projects to make people aware of the availability and benefits of contraceptive methods. As a result, the government is expending on condoms and freely distributing in vulnerable areas to prevent incidence of sexually transmitted diseases and curb the global population. Thus, active projects and campaigns undertaken by several authorities in spreading awareness will prove beneficial for the segment expansion over the forecast period.

Asia Pacific condom market size was over USD 1.6 billion in 2018. The rising awareness amongst adolescents in the region will augment demand for efficient contraceptives in the near future. Furthermore, changing customer attitude will be a high impact rendering factor for the regional growth. As a result, growing awareness coupled with changing customer attitude will positively stimulate the regional expansion during the forecast timeline.