Brewing Enzymes Market size is estimated to exceed USD 393 million by 2024 according to a new research report by Global Market Insights Inc.

Surging demand for beer, wine, whisky & other beverages among the young population owing to the rising disposable income and changing consumer lifestyle will propel the brewing enzymes market size. Shifting consumer buying behavior, creation & rejuvenation of urban centers, and proliferation of the lifestyle centers will be a key impetus for the industry landscape. Economic regimes such as lowered tax rates & incentives, coupled with various government subsidies will promote new companies to invest significantly in brewing R&D and innovations.

Rising awareness pertaining to numerous health concerns, upsurge in the prevalence of sporty lifestyle & social gatherings among youth is fueling the demand for alcohol free beer. For instance, as per the recent beer industry trends, in 2018 alcohol free beer witnessed a 60% boost in the UK retail segment. Hence, it will promulgate the industry expansion over the projected timeframe. 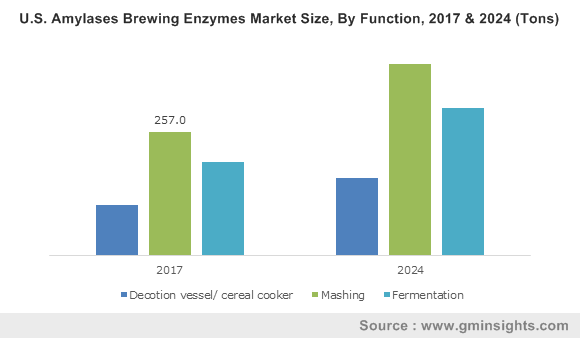 Key properties including effective catalytic properties and high stability during chemical reactions will provide notable gains for the brewing enzymes market in the forecast period. Upsurge in the demand for high performance enzymes owing to their easy availability and low cost will create new avenues for the manufacturers resulting in the enhancement of industry landscape.

Amylases market is anticipated to surpass USD 137 million till 2024. Increasing demand for craft, low alcohol and alcohol-free variants will support the product application scope. Key properties including ability to bear diverse temperatures & pH levels during beverage production processes is further fuelling the brewing enzymes market demand. Alpha amylase is the major mash enzyme variant of the amylase that aids in the production of fermentable wort. Upsurge in the crops production including malt, barley, and wheat owing to the shifting preferences of the young population towards light beer variants will propel the brewing enzyme market growth.

β-glucanases segment in the brewing enzymes market will witness CAGR at over 7% in the forecast period 2018 to 2024.  Positive application outlook of β-glucanases in the beer production processes owing to its ability of viscosity reduction will foster product penetration. These chemicals help in the breakdown of beta-glucans that are present in the barley endosperm cell wall. High quantity of beta-glucans in the brewing process may cause problems during beer filtration process, thus propelling the demand for β-glucanases across various breweries.

Asia Pacific brewing enzymes market was valued at over USD 80 million in 2017. Increasing demand for innovative & improved beer variants among developing economies such as China, Japan, and India will fuel the high-quality product demand among several brewers in the forecast period. Also, shifting consumer preferences towards low-cost beer variants coupled with rising popularity of malt & wheat beer variants will further support the product penetration across the region.

Europe brewing enzyme market is projected to surpass over USD 110 million in the forecast period 2018 to 2024. Rising number of craft breweries owing to exponentially growing demand for craft beer in the region will fuel the brewing enzymes market growth.  As per Brewers of Europe Association, the number of active breweries in EU-28 were 8,490 in 2016 as compared to 4,035 in 2010, growing at over 13% CAGR from 2010 to 2016. The major industry players across the region include Koninklijke DSM N.V., Novozymes A/S, AB Enzymes, and Danisco.

Brewing enzymes market research report includes in-depth coverage of the industry with estimates & forecast in terms of volume in tons and revenue in USD thousand from 2013 to 2024, for the following segments: