Biosimilars Market size is set to exceed USD 69 billion by 2025; according to a new research study published by Global Market Insights, Inc.

Cost effectiveness of biosimilars will be a major market boosting factor as it will lead to growing demand and adoption rate of the same. Biosimilars are usually less expensive as compared to other reference products such as biologics and bio betters. Implementation of safe and cost-effective biosimilars in the U.S. will further lead to health improvements and reducing the health expenditure. Hence, low cost of drugs as compared to other drugs will increase the demand and adoption of biosimilars, thereby augmenting the business growth in near future.

Biosimilars market is estimated to grow due to high number of patent expirations of biologics drugs, government cost saving initiatives and increase in prevalence of chronic diseases. Several well known biologics are estimated to loose their patents in the forthcoming years, giving the chance for other big pharma players to manufacture their biosimilars, thus, set to increase in number of biosimilar applications and approvals, and augmenting the industry growth. 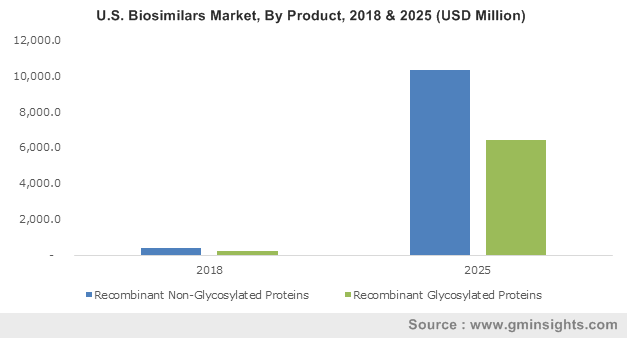 However, presence of biologics and bio betters will be one the major market impeding factors. Presence of sophisticated biologic drugs still in the market along with several bio betters and generic versions of the drugs will hamper the business growth over the estimation period.

Recombinant glycosylated proteins market is estimated to grow at around 28.7% over the estimation period. Increase in number of people suffering from chronic disorders such as cancer and blood disorders will result in growing demand for biosimilars. Also, recent launch of molecular antibody biosimilars in developed regions of North America and Europe will boost the growth of recombinant glycosylated proteins over the forthcoming years.

Biosimilars market research report includes in-depth coverage of the industry with estimates & forecast in terms of revenue in USD million from 2014 to 2025, for the following segments: