Biodefense Market size is set to exceed USD 19 billion by 2024; according to a new research report by Global Market Insights.

Technological advancements in biotechnology sector will positively influence the biodefense market growth. Advancements in biotechnology includes developments in detectors that are utilized in assessing the threat against deliberate release of viruses and microbes. This scenario proves beneficial for the biodefense market growth as it surges the demand for vaccines and biothreat identifying agents such as assays as well as reagents in case of any bioterrorism attack.

Government in developed countries is highly aware regarding the impact of bioterrorism attacks on economy that should positively impacts biodefense market growth. Several strategies are implemented including stocking the vaccines and production of bio-threat detection devices to secure the population against bioterrorism attacks. Currently, government in developing countries is also indulging in activities that assure safety against any intentional virus attack. For instance, economies such as India are more susceptible to agricultural bioterrorism and hence, government is undertaking several initiatives to protect the nation as majority of the population relies on agriculture as it is their main occupation. However, low R&D funding by government in developing and underdeveloped economies will hamper the industry growth in forthcoming years. 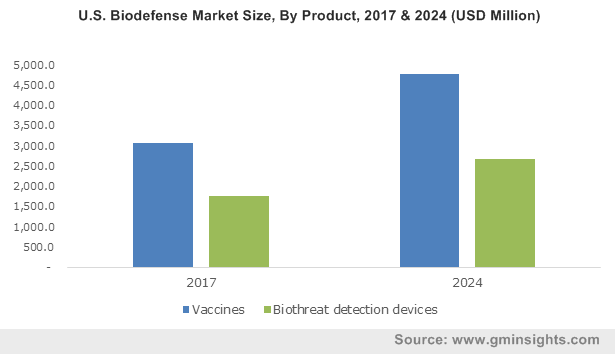 Vaccines segment was valued at USD 7.8 billion in 2017. Rising government initiatives will elevate the demand for superior quality vaccines that are stocked to fight infections caused due to sudden attack of viruses. Recently developed vaccines are highly efficient and create strong immunological response that helps in combating infection creating immunogenic memory. Growing preference for broad spectrum vaccines capable of inducing strong immunogenic response against microbial and viral infections will propel the segmental growth during the forecast period.

UK biodefense market will witness 6.3% CAGR over the forecast timeframe. Increasing technological advancements in biotechnology sector will boost the production of vaccines surging the segmental growth in upcoming years. Extensive research and development activities have brought innovations in the bio-threat detection devices that will augment UK biodefense market in near future.

Canada biodefense market was valued at USD 349.3 million in 2017 and is expected to have considerable revenue size during the forecast period. Rising government initiatives and funds for taking preventive measures against the bioterrorism attacks will drive the industry growth. Moreover, growing availability of superior quality vaccines and technologically advanced bio-defense devices will trigger the industry growth.

Biodefense market research report includes in-depth coverage of the industry with estimates & forecast in terms of revenue in USD million from 2013 to 2024, for the following segments: