Bike Sharing Market size is set to exceed USD 10 billion by 2025; according to a new research report by Global Market Insights Inc. The industry fleet size is anticipated to witness 8% growth from 2019 to 2025.

The technical advancements in navigation technologies used in bicycles are fueling the bike sharing market growth. With advances in these technologies, service providers are offering bicycles with built-in navigational systems and facilitating commuters in reaching their destinations conveniently. The availability of large-scale venture capital investments is providing lucrative opportunities for industry expansion. Venture capitalists are making large investments in bike-sharing start-ups to enhance their business operations. The changing consumer preference toward sharing rather than owning bicycles is adding up to the industry development. Young consumers are increasingly adopting these services owing to the increasing health consciousness. The rapid development of dedicated infrastructure & bike friendly regulations across the globe is expected to elevate industry growth over the forecast timeline.

The major factor hindering the bike sharing market expansion is the lack of awareness related to these services. The high cost associated with the maintenance of bikes is restricting service providers to add new bikes to the fleet. However, companies are adopting high-quality bikes to offer a comfortable riding experience and reduce maintenance cost. 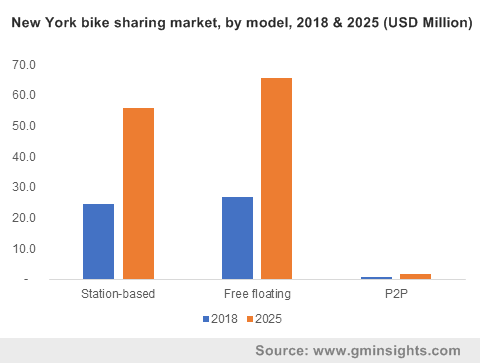 The demand for conventional bikes is increasing in the industry due to their low initial & maintenance cost as compared to e-bikes. The service providers are making large investments for offering advanced technologies, such as GPS, IoT, and AI in conventional bikes, contributing to the bike sharing market expansion. These services are majorly used in Asia Pacific and Latin American countries such as India, China, and Brazil due to the unavailability of ample investments for the adoption of e-bikes. Companies are adding normal as well as geared bicycles to their fleet to enhance business performance.  The multi-gear technology allows users to change the riding speed as per the terrain, increasing their comfort & riding efficiency.

The station-based service segment is expected to witness rapid growth in the bike sharing market over the forecast timeline due to increasing government investments for the development of public transportation infrastructure. Companies are installing several new sharing stations at various locations to expand their geographical reach and offer customers bikes at convenient locations. For instance, in August 2018, Divvy Bikes announced the installation of 30 new stations in the Chicago region including River North, Englewood, and Ukrainian Village. Moreover, the station-based model reduces the threats of vandalism & theft due to the enhanced security of stations. However, the high infrastructure development cost of these stations is leading service providers to adopt peer-to-peer solutions.

The North America bike sharing market is expected to grow at over 10% CAGR from 2019 to 2025 due to the robust expansion of e-bike sharing services in the U.S. Companies are deploying e-bikes over traditional cycles to offer enhanced performance to their customers. For instance, in June 2019, Madison BCycle announced the replacement of its conventional bikes with e-bikes in the U.S. The working professionals in several cities including New York, Seattle, and Chicago are opting for these solutions to commute to and from their workplaces. As per the data shared by the National Association of City Transportation Officials (NACTO), in April 2019, approximately 35 million shared trips were taken in the U.S. in 2017 that is around 25% more than in 2016. Companies operating in the region are offering coupons, discounts, and free rides on specific days to gain an enhanced customer base. For instance, in November 2018, Citi Bikes and Motivate announced free rides to voters on election day in the U.S. Station-based services are primarily adopted by service providers in North America due to the increasing threats of theft.

Key companies in the bike sharing market include ofo, Lime, Mobike, Neutron Holdings Inc., Youon Bikes, Tembici, Capital Bikeshare, Divvy Bikes, Ford GoBike, and Nextbike. Companies are gaining large capital investments to enhance their business by increasing the fleet size. For instance, in December 2017, India based cycle sharing start-up, Mobycy, raised around USD 500,000 in seed funding. This aided the company to enhance its cycle fleet to 5,000 in several Indian cities such as Delhi, Noida, and Gurgaon. Companies are adopting advanced technologies such as Big Data and AI, which aid them to improve their cycling infrastructure.

The bike sharing market research report includes in-depth coverage of the industry with estimates & forecast in terms of revenue in USD, users in million, and fleet size in thousand units from 2015 to 2025, for the following segments: