Antidiabetics Market size is set to exceed USD 110 billion by 2024; according to a new research report by Global Market Insights.

Favorable government policies such as paying part of final price of diabetes medication to reduce prevailing disease burden and rising awareness about early disease diagnosis and treatment will positively impact industry growth. Organizations such as International Diabetes Federation working towards advocating people about diabetes and its treatment available in the market should positively impact growth.

Industry players are investing heavily in research and development to introduce superior treatment for diabetes in the market to gain significant market share as well as augment consumer base. Strong product pipeline indicates robust growth of antidiabetics market over the forecast timeframe.  However, high price of insulin and other antidiabetic products will hamper anti-diabetics industry expansion to certain extent especially in low- and middle-income countries over the coming years. 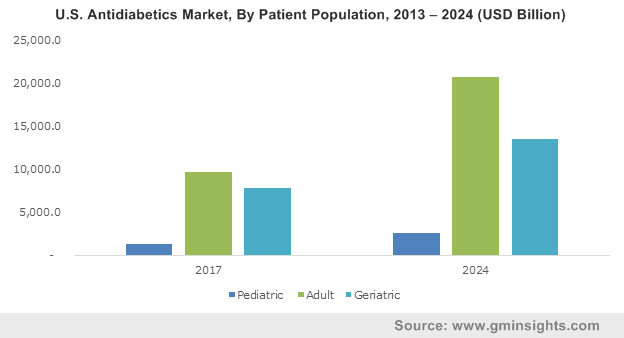 Insulin syringe/pen segment is anticipated to witness 10.4% CAGR during the forecast period. Rising demand for self-injection devices, elevated accuracy in dosage delivery and growing prevalence of diabetes will drive insulin syringe/pen segment over the coming years. Cost-effectiveness of insulin pens as compared to insulin pumps should contribute towards segment growth.

China market is anticipated to reach over 9.4 billion by 2024. Rising prevalence of diabetes and increasing geriatric population and will act as major driving factor for China antidiabetics market. Growing adoption of unhealthy diet, escalated consumption of alcohol and tobacco smoking along with physical inactivity will result in increasing number of diabetic patients, thereby fueling industry growth.

Antidiabetics Market research report includes in-depth coverage of the industry with estimates & forecast in terms of revenue in USD million from 2013 to 2024, for the following segments:

Antidiabetics Market, by Route of Administration