Aircraft Winglets Market size is estimated to cross USD 3.2 billion by 2026, according to a new research report by Global Market Insights Inc.

Major government bodies have provided stringent regulations for curbing the carbon emission generated from different industries across the globe. For instance, European Union Emissions Trading System (EU ETS) has offered cap on major resources of carbon dioxide emission. This will put pressure on several airlines operating in Europe to report and verify emission of in-service aircrafts and limit it in order to prevent themselves from additional charges. This has generated pressure on airlines to install the product on their in-service aircrafts, thereby supporting market growth. 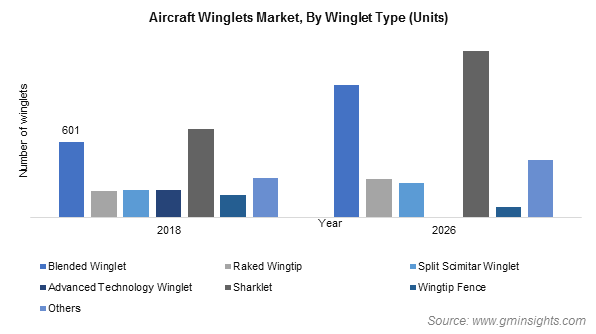 The key restraint in the market is the time required for retro fitting this product on aircraft structures. Higher retrofitting time increases aircraft on ground time, thereby resulting in revenue losses to airlines. However, growing usage of advanced technologies along with planning of aircraft maintenance and winglets retrofitting activities at the same time will enable the reduction in time with a reasonable cost.

Sharklets have offered several advantages to A320 family aircrafts such as reducing takeoff thrust of aircraft for the same takeoff weight, thereby enabling airlines to save up to 2% in engine maintenance costs. Sharklets further improved the range of aircrafts by up to 110 nm. Airlines across the globe are ordering several new aircrafts to enhance their presence in emerging aviation markets.

Regional jets will generate market revenue of over USD 40 million by 2026. This is owing to growing product usage in this segment. Increased production of regional jets by Bombardier and Embraer with introduction of advanced models will support market growth. According to International Air Transport Association (IATA) fact sheet 2019, new regional jets are expected to enhance fuel saving by 20% as compared to previous versions of regional jets. New jets are further equipped with active winglets to achieve fuel saving targets.

B737 platform will have significant portion in the market throughout the study period owing to increasing usage of blended winglets in several B737 category aircrafts. These aircrafts expected to showcase over 15% CAGR by 2026. Increased retrofitting of split scimitar and blended types for 737-300 to improve payload capacities will further support market growth.

Line fit aircraft winglets will have significant growth rate over the coming years owing to increasing product adoption in new aircraft production over recent years. Aircraft manufacturers such as Airbus and Boeing are offering sharklets and winglets as standard equipment of several new aircraft models, which is supporting the segment growth.

Asia Pacific aircraft winglets market will showcase a considerable growth of close to 7% CAGR during the forecast timeframe. Increasing air tourism along with business travel has generated a higher demand for new aircrafts. According to IATA forecast, Asia Pacific is likely to carry over half of the number of new passenger traffic across the globe by 2037.