Aircraft Thrust Reverser Market size is estimated to surpass USD 2.2 billion by 2024; according to a new research report by Global Market Insights, Inc.

Increasing global GDP is among prime factor driving the air traffic growth. Shifting trend towards liberalization, development of new service-based business model and growth in tourism are the prime factors fueling the air plane demand. Improving the operational safety of the airplane are the key focus of the manufacturers and airliners. Reduced landing distance along with regular safety checks of the plane will positively influence the product penetration. 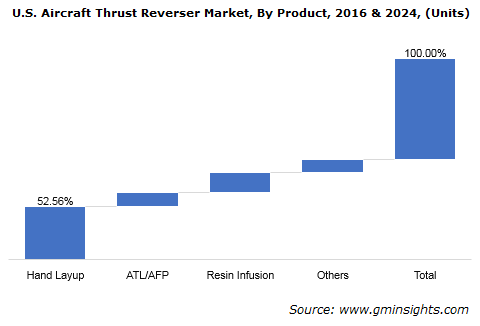 Design complexity along with high cost required for the product production and installation may hamper the industry growth. Manufactures are focusing on reducing the overall production cost with implementing automation and reducing the cycle time required for the composites. Long term supply agreement along with becoming sole integrator for the airplane manufacturers are the key strategies of the participants.

Cascade accounts for major volume share and will witness strong growth during the forecast timeframe. The growth can be attributed to increasing implementation of the product in advanced aircrafts. Bucket will witness growth over 4% up to 2024. Increasing trend for MRO along with growing trends of replacing conventional fleet size with advanced airplanes are the key factors driving the product growth.

Aircraft thrust reverser market demand from large widebody aircraft generated over USD 40 million in 2016. The revenue contribution can be credited to growing demand for airplane particularly from developed region. Aircraft thrust reverser market from single aisle air body will witness strong growth over 4.5% up to 2024. Strong demand of the commercial particularly from emerging countries owing to increasing investment in airliner will drive the business growth.

In 2016, hand layup contributed over 50% of aircraft thrust reverser market share. Development of the process offering superior production method, easy processing and mass production are the key factors fueling the industry demand. ATF/ATP will witness rapid growth over 4.5% during the forecast timeframe. Innovations in the production process with implementation of automation and reducing the overall processing time will drive the segment growth.

North America led by the U.S. dominates the aircraft thrust reverser market accounting over 55% of industry share. In 2015, the U.S. airplane and spacecraft exports accounted over USD 130 billion owing to demand from emerging countries and high backlog. Presence of industry participants in the region along with demand for commercial airplane will fuel the regional growth.

Europe aircraft thrust reverser market led by Germany, France and UK will witness growth during the study timeframe. In 2015, aerospace industry export from France, Germany and UK together accounted over USD 115 billion. Stringent airplane safety regulation in Europe will fuel the product demand in the region. Mandatory installation of the product in widebody, narrow body and regional airplane will boost the regional demand.

Aircraft thrust reverser market research report includes in-depth coverage of the industry with estimates & forecast in terms of volume in units and revenue in USD million from 2013 to 2024, for the following segments: