Aircraft Evacuation Market size is estimated to exceed USD 1 billion by 2025; according to a new research report by Global Market Insights, Inc.

Proliferating military expenditure across the globe will propel aircraft evacuation market size. In 2018, the U.S. government allocated around USD 700 billion for defense sector. Further, rising passenger traffic will augment industry growth. According to the World Bank Group, in 2017, total air passengers reached 3.98 billion with an increase of around 7.5% as compared to 2016. 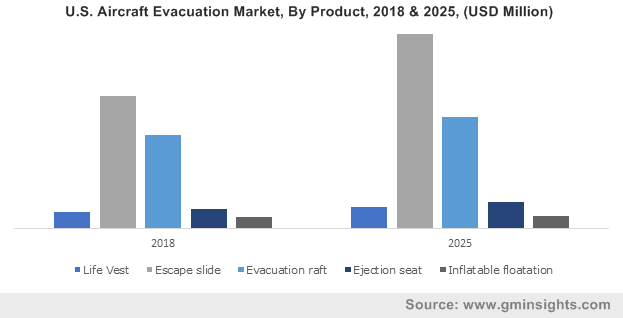 Ejection seat will witness significant growth over the forecast timeframe with increasing investments from defense sector to develop advanced products. In April 2017, the U.S. Air force contracted United Technologies Aerospace Systems and Martin Baker for development and manufacturing of evacuation ejection seats, providing a positive outlook for the industry growth.

Increasing airplane deliveries will drive the market growth over study timeframe. For instance, in 2018, Boeing announced to deliver around 42,730 aircrafts by 2037. Growing airplane fleets will induce significant potential in industry size. However, high investment requirement for cabin crew training programs will limit the market growth.

OEM holds substantial revenue share with increasing demand for air carriers across the globe. Replacement of existing airplane fleet owing to ageing airplane to meet government regulations for airworthiness are positively influencing the segment growth. Moreover, development of low-cost carriers coupled with increasing demand for narrow-body aircrafts such as A320, B737, A319, and B757 will enhance the segment dominance till 2025.

Asia Pacific aircraft evacuation market share will witness a significant growth owing to increasing demand for air travel. Further, as per IATA, the region is witnessing an annual increase of around 5.5% passenger traffic. Continuous investments by industry players for setting up of manufacturing facilities are further supporting the regional growth till 2025.

Major market players include EAM Worldwide, Martin-Baker Co. Ltd, Survitec Group Limited and Survival Equipment Services. Partnerships and joint ventures are among the prominent strategies adopted by the industry participants to expand their presence in the marketplace. For instance, in July 2017, Survival Equipment Services announced a strategic partnership with Task Aerospace Inc. This partnership enabled company to expand their services & maintenance segment for ejection seats by including ACES, NORTHROP, ESCAPAC, and SIIIS seats.

Aircraft evacuation market research report includes in-depth coverage of the industry with estimates & forecast in terms of volume in units and revenue in USD million from 2013 to 2025, for the following segments:

Aircraft Evacuation Market
Contact Us  Request Free Sample
Top
Chat with us
We use cookies to enhance your experience. By continuing to visit this site you agree to our use of cookies. More info X