Afterburner Market size is likely to surpass USD 125 million by 2026, according to a new research report published by Global Market Insights Inc.

The increasing adoption of the afterburner to achieve higher rate of climb, better take-off, and to meet performance demands during strategic maneuvers is likely to drive the afterburner industry growth. Rising trend toward the high turbine discharge temperature afterburner and increasing need for suitable operation over long air to fuel ratios has further surge the product penetration.

The market players are concentrating on using additive or 3D manufacturing for the production of fuel system components, reducing the overall weight, cost and also aiding them to produce complex designs. Compact size, lightweight, and high-performance afterburner systems are consuming low fuel compared to older afterburners. However, the industry is projected to witness a decent growth during 2020 to 2026 due to the decreasing aircraft production worldwide. 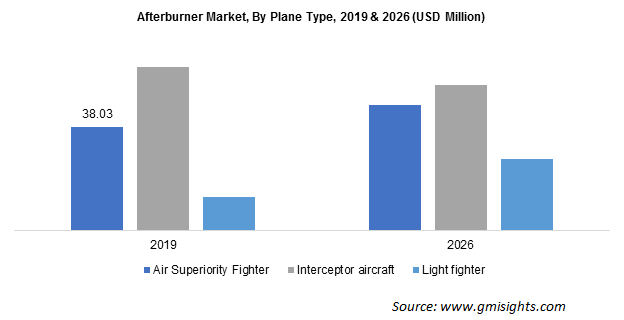 Various countries are expected to replace their old fighter aircraft in the coming four to five years owing to high maintenance cost, higher share of accidents, and limited software upgrades, creating significant opportunities for aircraft manufacturers. For instance, in 2020, German Air Force also known as Luftwaffe is set to buy 30 single-seater and 8 twin-seater Eurofighters to replace their aging fleet of combat aircraft. These trends have encouraged aircraft manufacturers to upgrade or increase their production assembly, driving the afterburner market demand.

Furthermore, to gain a competitive advantage, the manufacturers are collaborating with aircraft manufacturers or with the regional government for product development and direct sales of the product. For instance, in 2020, GE Aviation won the contract worth USD 394 million from the Defense Logistics Agency (DLA) to deliver J85 engines to the U.S. Navy and Air Force.

The light fighter segment is forecast to witness more than 15% CAGR in terms of volume from 2020 to 2026. The light fighter is a light multirole jet military aircraft, and is commonly used for light fight missions, either in attack missions or light strike, investigation or exclusion roles. Moreover, it also used for advanced training of pilots. Owing to its small design and low-power engine, it can easily be used for the patrolling purpose.