Aerospace Landing Gear Market size is expected to exceed USD 19 billion by the end of 2026, according to a new research report published by the Global Market Insights Inc.

The aviation industry expansion can be largely attributed to improving economic conditions across major emerging economies and liberalization of aviation policies. For instance, the open skies policy in ASEAN countries on LCC for uninterrupted air travel across nations has expanded the growth of the market.

According to the Center for Aviation, the projected commercial aircraft deliveries from Airbus and Boeing in 2019 were 863 and 763 respectively. However, the order backlog for aircraft deliveries is equivalent to almost 10 years of production. The continuous year-on-year growth in airplane deliveries will positively influence business share through 2026. These trends showcase a positive outlook for the aerospace landing gear market growth. Furthermore, the industry is estimated to observe a moderate gain due to decreasing aircraft production, delay in aircraft deliveries, and a decline in air passenger traffic growth worldwide. 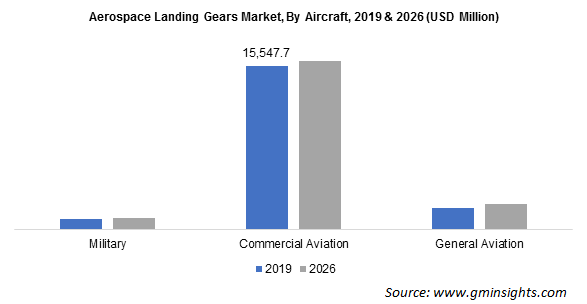 Proper designing and simulation of landing gears are done during the design and development stage. Several commercially available dynamic simulation & software tools including CAE/CAM/CFD/CAD are utilized during the initial engineering stages and analyzed virtually. These enable improved designs coupled with reduced cycle-time and cost of aerospace landing gear systems. Moreover, the introduction of big data technologies, advanced tools, and analytics will support in capturing maintenance & operational data, offering greater insights. This will help in minimizing operational and maintenance costs. Thus, the increasing use of software tools will positively influence the aerospace landing gear market size.

The tail wheel arrangement segment is projected to achieve 4% CAGR during 2020-2026. Tail wheel or conventional landing gears are deployed in old aircraft owing to their lightweight and easy to operate application. Moreover, many aircraft manufacturers use tail wheel landing gears to increase the clearance of the forward fuselage and reduce aircraft weight. The gears will thereby enhance efficiency and a failure of the tailwheel on landing will minimize aircraft damage due to the phenomena of a propeller strike.

In terms of value, the fixed-wing segment will witness over 4.5% CAGR through 2026 driven by the availability of multiple aircraft of various configurations with fixed-wing systems. The fixed-wing aircraft offers several benefits over rotary-wings including lower maintenance, higher speed, improved efficiency, and low operating costs. These aircraft are also used by the military for combat and non-combat operations.

Europe held over 25% aerospace landing gear market share in 2019 propelled by large aircraft production and large aircraft fleet across the region. Increasing air passenger traffic in the region has played a major role in industry growth. For instance, the escalating number of air travel passengers increased by 3.8% in 2019 compared to 2018.