There is constant increase in defense expenditure globally year on year. This can be attributed to rise in geopolitical issues and arms races among major economies such as China, India, the United States and Russia. Global military expenditure rose 5% in 2018 and reached USD 1.8 trillion. The total spending is 68.4% higher in 2018 and compared to year 2004 spending. According to Aviation Week, the total number of in-service fleet aircraft were 41,605 in 2017 and expected to grow by 1,230 by the end of 2027. There is an active open requirement of 834 aircrafts and helicopters by different military forces around the world. Around 7,100 aircrafts and helicopters are going to retire in coming years. This will have positive impact on demand of C-class parts in aerospace and defense sector. However, adhesives are quickly replacing the traditional mechanical fasteners such as bolts, rivets, nuts, screws, pins and other mechanical fasteners. Use of adhesives instead of mechanical fasteners in aerospace and defense industry can act as a barrier for the aerospace & defense c-class parts market growth in future. 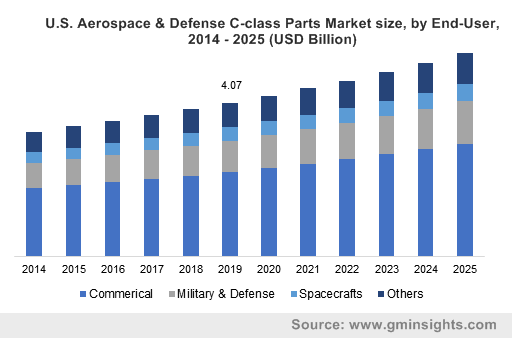 Aerospace & defense c-class parts family is broadly categorized into fasteners, bearings, electrical components, machined parts. Fasteners segment contributed a revenue over USD 5 billion in 2018, however, bearings segment is gaining traction, due to their indispensability. Changing dynamics in the global aerospace and defense industry requires innovative designs for next generation aircrafts, such innovations will be drive bearings demand to reduce friction and support load transfer in the aircraft.

Global aerospace & defense c-class parts market is categorized on the basis of application into airframe, interiors, and system. Aircraft airframe segment held the largest share and gaining popularity owing to increasing production rates of major programs by Boeing and Airbus. Additionally, there is rise in demand for lightweight c-class parts and commercial aircraft fleet by major airliners. On the basis of distribution channel aftermarket segment turn out to be largest segment in 2018 holding around 70% market share. This is due to large numbers of MRO’s in the market and their ability to serve customers according to their needs and wants.

Based on end-user, the aerospace & defense c-class parts market is segmented into military & defense, commercial, spacecrafts and spaceships. Commercial segment was the largest segment in 2018 owing to increasing air passengers, decreasing air fares due to cutthroat competitions among airlines and flourishing tourism & travel industry. Commercial segment had market share by revenue more than 55% in 2018 and shall reach up to USD 8 billion by 2025. Another rapidly growing segment is military & defense with CAGR of 5% over forecast period.

The aerospace & defense c-class parts market research report includes in-depth coverage of the industry, with estimates & forecast in terms of volume in tons and revenue in USD million from 2014 to 2025, for the following segments:

Aerospace & Defense C-class Parts Market
Call Us  Request Free Sample
Top
Chat with us
We use cookies to enhance your experience. By continuing to visit this site you agree to our use of cookies. More info X