Acetic Acid Market size is set to reach USD 17.9 billion by 2024; according to a new research report by Global Market Insights.

Global acetic acid market is positively affected by the rapidly growing demand for coatings and sealants across various industrial verticals. Acetic acid is widely used to produce vinyl acetate monomer across the globe. These monomers are in turn used in the production of coatings and adhesives which is anticipated to contribute positively to the growth of the overall market. Moreover, almost 80% of the VAM is used in the production of polyvinyl acetate (PVAs) and polyvinyl alcohol (PVOHs) which are major constituents textile and packaging industries.

Acetic acid can be produced in several ways whereas methanol carbonylation being the most common method used. In this process, carbon monoxide and methanol react to create acetic acid and iodomethane is used in the reaction as an intermediate. However, the fluctuating cost of raw methanol is a major hinderance to overall acetic acid market. The manufacturers are constantly trying to shift towards the production of bio-based acids which is likely to open new opportunities in the market throughout the forecast period. Bio based acetic acid not only reduced the dependency on volatile methanol price but also aids in reduction of carbon footprint. 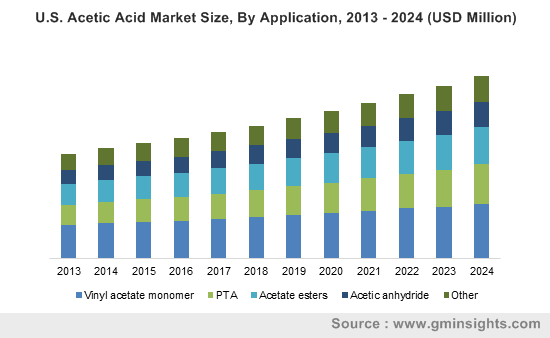 Among the various application segments, VAM was the largest segment in 2016 closely followed by the terephthalic acid and is projected to exhibit the same trend throughout the forecast period. The growing demand for tera phthalic acid in the polyester production such as polyester fibers, PET bottles and polyester films is set to boost the growth of the segment. The PTA segment is forecast to revenue of over USD 4 billion by the end of 2024.

Asia Pacific acetic acid market is projected exhibit an encouraging CAGR during the forecast timespan. China generated the highest revenue gains in 2016 and is projected to grow at a growth rate of 6.0%. The increasing personal disposable in the region along with abundance availability of raw materials are major factors affecting the growth of the market. Furthermore, the growing construction and packaging industries is also projected to generate substantial revenue to the market. North America and Europe are other significant regions contributing demand. The European region held a market share of over 12% in 2016 and is projected to grow at a CAGR of over 4% throughout the forecast period 2017-2024.

Acetic acid industry is diversified with large number of small scale as well as big scale manufacturers around the globe. The major players active in the market include Mitsubishi Chemicals, British Petroleum, GNFC, Saudi Petrochemicals, Wacker Chemie, Eastman Chemical Company, DuPont, Celanese Corporation, HELM AG, LyondellBasell, Sinopec, Daicel Corporation, PetroChina. The proficient players are adopting various organic and inorganic growth strategies to enhance the market hold. For instance, in 2013, British Petroleum company started the manufacturing of key petrochemical feedstocks, SaaBre, through a new route for the production of ethanoic acid or acetic acid from syngas that directly converts ethanol to ethylene through dehydration. This production process is in line with the strategy to reduce their dependency on the fluctuating raw material prices.

The acetic acid market research report includes in-depth coverage of the industry, with estimates & forecast in terms of revenue in Kilo Tons and USD million from 2014 to 2025, for the following segments: