3D Display Market size is set to surpass USD 60 billion by 2026, according to a new research report by Global Market Insights Inc.

3D displays are experiencing a wide adoption from the consumer electronics industry with its increasing acceptance in wearable electronic devices. Rising consumer preference toward health has propelled the demand for smartwatches, Fitbits, and smart glasses.

High product recycling costs and stringent environmental regulations on the use of hazardous elements in 3D display components are some of the major factors restraining the market growth. Additionally, these devices require 3D glasses, creating inconvenience for the user. However, companies are coming up with multi-view autostereoscopic technology-based 3D devices that do not require glasses. Major manufacturers rely on suppliers from Asian countries to procure raw material and components. Due to the COVID-19 outbreak, the global supply chain is negatively impacted. 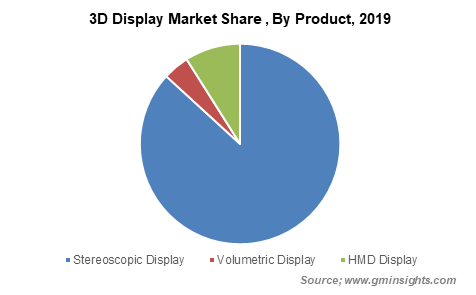 Virtual reality headset segment accounted for over 10% of the market share in 2019 and is anticipated to witness more than 35% growth rate till 2026 owing to the rising adoption of mixed reality headsets in the gaming sector. The HMD integrates Virtual Reality and Augmented Reality (AR/VR) technologies to offer more realistic gaming experiences. Tech giants, such as Facebook, Microsoft, and Samsung, are introducing new head-mounted display products to augment the growing need from the gaming sector.

HMDs are also experiencing significant growth opportunities from the aerospace and defense sectors. These products leverage the 3D display technology and are extensively integrated into the cockpits of modern aircraft for training, simulation, and tactical applications. The 3D HMD display leverages the viewing angle and high precision in object detection, which supports the pilot in combat situations. Several companies are developing application-specific HMDs for aerospace and defense applications.

The LED technology is estimated to attain a CAGR of over 25% through 2026 led by technological advancements in mini-LED and micro-LED display components. The LED technology offers several benefits, such as higher contrast ratio, full viewing angle, low-power consumption, and thinner design in the display, over OLED & other conventional displays. In January 2019, Samsung launched a 3D LED screen with a 4K HDR viewing experience. The new LED screen delivers enhanced 3D depth of field and high picture quality. Such innovations in LED technology will increase the demand for 3D displays in the market.

The revenue share for TV application segment has led a negative impact on the demand for market, with the abandoning of 3D TV by major manufacturers. Sony and LG were the last two major brands to continue selling 3D television sets and has also ceased their production in 2017. These televisions failed to attract the consumer minds due to inconvenience of wearing special glasses and nausea and motion sickness experienced by several viewers. Additionally, the lack of content is also one of the major factors leading to diminish of 3D televisions. Initially small amount of material was produced by the broadcaster which has propelled their demand in starting phase, offering high quality display content. Although, the high cost associated with the 3D TV has further restrained their adoption.

Asia Pacific 3D display market held over 35% revenue share in 2019 and is expected to expand at 31% CAGR from 2020 to 2026. The market growth is majorly attributed to the rising consumer electronics sector in countries including India, China, Taiwan, and South Korea. The changing lifestyle of consumers and rising demand for more advanced electronics are some of the factors that are likely to increase the adoption of 3D displays in the region. Furthermore, favorable government initiatives supporting electronics and semiconductor manufacturing in the region will fuel the market expansion.