U.S. Cannabis Testing Market size accounted for more than USD 1.5 billion in 2021 and is expected to grow at a 10.5% CAGR from 2022 to 2030. Rigorous R&D initiatives to utilize cannabis for treating infections and illnesses will boost the market expansion. 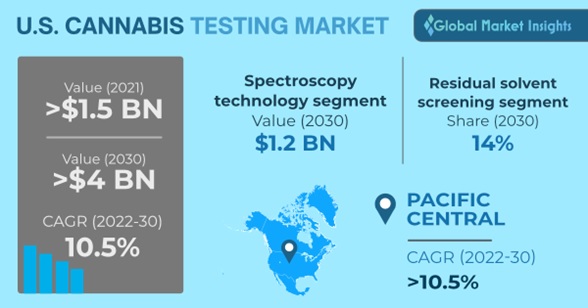 Cannabis drug testing has gained traction in the pharmaceutical, sports, and legal sectors. Rigorous regulatory norms implemented by authorities to ensure superior quality of products are set to propel market progress. These authorities are working towards protecting consumer health while also maintaining the efficiency of supervisory conduits for the lawful commercialization of appropriate cannabis-derived products and cannabis.

The lack of testing standardization is projected to restrain the U.S. cannabis testing market growth. There is a strong requirement for effective regulatory and quality management standards for governing accurate and precise dosages of cannabis for medical purposes, however, the lack of uniformity in quality standards across various states has hampered the quality of cannabis-based medicines. Nevertheless, growing legalization trends across different states of the country are likely to enhance the federal testing standards. 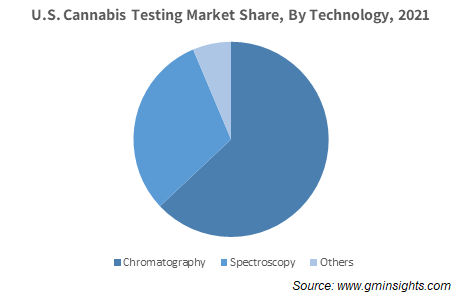 In terms of technology, the U.S. cannabis testing market is categorized into chromatography and spectroscopy. The spectroscopy technology segment is expected to reach USD 1.2 billion by 2030. This is attributed to various benefits offered by spectroscopy technology, including real-time analysis, high throughput, and minimal requirements for sample preparation. In addition, it is relatively more economical than its counterpart, which is slated to accelerate the adoption of spectroscopy.

With respect to test type, the U.S. cannabis testing market is divided into pesticide screening, heavy metal testing, residual solvent screening, potency testing, terpene testing, and mycotoxin testing. The residual solvent screening segment is anticipated to capture nearly 14% revenue share by 2030 as a result of its significance in the analysis of highly concentrated forms of cannabis. A Residual Solvent Test (RST) detects harmful solvents, impurities, and other added odorants & chemicals that are present in super-concentrated forms of cannabis, which is increasing the uptake of the test. 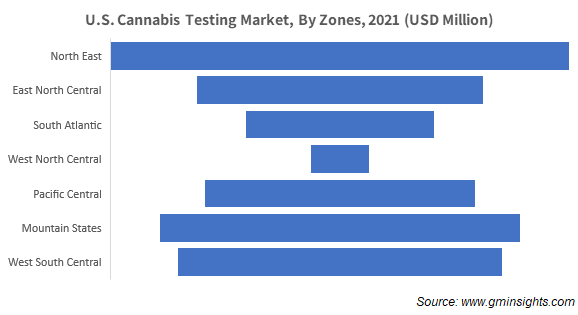 Pacific Central cannabis testing market is estimated to grow at more than 10.5% CAGR over 2022-2030. Due to substantial demand for medical marijuana in states such as California and Oregon, along with favorable regulatory norms pertaining to cannabis testing in the states, the zone is speculated to maintain its dominance in the forthcoming years.

Impact of COVID-19 on the U.S. cannabis testing market trends

The impact of the COVID-19 pandemic on the U.S. cannabis testing industry was observed to be optimistic. Several researchers focused on numerous treatment options, including cannabis as its extracts affect the expression of ACE2 and TMPRSS2 protein in human cells.

The U.S. cannabis testing market report includes in-depth coverage of the industry with estimates & forecast in terms of revenue in USD million from 2017 to 2030 for the following segments:

The above information is provided for the following zones and states:

The U.S. market size for cannabis testing was valued at more than USD 1.5 billion in 2021 and is set to progress at around 10.5% CAGR between 2022 and 2030 owing to rigorous R&D initiatives to utilize cannabis for treating infections and illnesses.
The residual solvent screening segment is projected to capture nearly 14% market share by 2030 on account of increasing awareness regarding its importance in the analysis of highly concentrated forms of cannabis.
U.S. cannabis testing market from spectroscopy segment is poised to be valued at USD 1.2 billion by 2030 as the technology provides real-time analysis, high throughput, and minimal requirements for sample preparation.
The Pacific Central cannabis testing industry is speculated to grow at more than 10.5% CAGR over 2022-2030 as a result of favorable regulatory norms pertaining to cannabis testing and substantial demand for medical marijuana in the states.
Customize this Report
Inquiry Before Buying