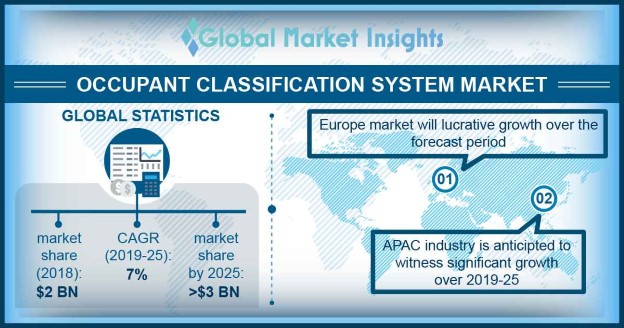 Vehicle safety has become an important area of focus for automotive manufacturers owing to the increasing mortalities due to car accidents and it has resulted in the adoption of front airbags contributing towards the occupant classification system market growth. In addition, several governments around the world are pushing the automotive industry to integrate more advanced safety systems into cars, further influencing the market. These can help in suppressing the high impact of airbag forces and preventing injuries, especially in children and small-sized occupants.

Most of the developed countries have made it mandatory to deploy such systems. The U.S. has provided a mandatory regulation for all cars and trucks made after 2006 to have airbags, creating lesser risks of injuries to occupants. Moreover, the immense growth of automotive electronics has given a boost to the market. People with high disposable incomes in regions such as Europe have become more demanding about the vehicle safety. The awareness about active & passive safety is expected to further drive the industry growth.

The bladder system is widely used in the occupant classification system market. These basically comprise fluid containing bladder placed in the seat, which is used to detect the weight of the occupant. The PODS technology provided by Delphi consists of a weight-sensing bladder system, which is mounted under the cushion of passenger seats. It uses signal processing & sophisticated algorithms. This enables airbags to variably suppress or deploy the pressure. This Delphi system consists of a pressure sensor under the cushion, electronic control unit, and Silicon fluid-filled bladder system. The sensor signals the weight of the occupant to the control unit. The bladder sensors have been adopted in many mid-range cars, which have influenced the market.

Other technologies used in the market include strain gauge and pressure-sensitive tape system. Strain gauge systems by companies, such as Gagetek Co. and BF Goodrich, use silicon micromachined technology. These systems use torsional-sensing load cells, which can detect the position & weight of the occupant for the airbag deployment. The pressure-sensitive tape systems are generally implemented in luxury cars and are expected to be implemented growingly in the market with the growing demand for luxury cars.

The occupant classification system market is expected to have a high growth potential in economy-class vehicles. The growth in the middle-class population and disposable income has made economy vehicles more popular in regions, such as Asia, Middle East while manufacturers are providing these systems in economy cars.

Luxury cars contribute to a large share as luxury car manufacturers have always been inclined towards the adoption of sophisticated and improved safety systems in cars. Moreover, the buyers of luxury cars consistently demand for high-level vehicle safety systems. This has influenced the market growth in the luxury car segment. Automotive players, such as Mercedes-Benz, BMW, and Audi, have already implemented these systems in their several passenger car models.

Majorly used components in the occupant classification system market are ECUs and sensors. The ECU helps to transfer the signals from sensors to airbag systems for deciding the required force. The ECU is crucial for controlling the airbags and other electronic systems in the car. The sensors are used for detecting weight, size, and the seating positions of occupants. In advanced safety systems, the sensors are being used to detect other datasets such as if the passenger is wearing a seat belt or not and for determining when the child seat is fitted using seat tension sensors. Strain sensors, pressure sensors, and bladder type sensors are widely used technology. 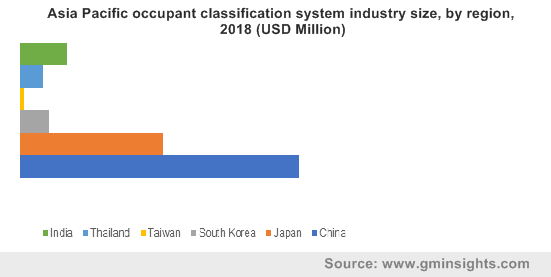 Asia Pacific is expected to be one of the dominating regions for occupant classification system market growth. Mahindra KUV 100, Toyota Etios, Maruti Suzuki Desire are some of the popular economic cars in the region, which have implemented airbags for safety. Moreover, several automotive manufacturers have focused on the Asia Pacific region for the expansion in manufacturing activities, leading to increased vehicle production. Around 23 million cars were manufactured in China in 2018. The Asia Pacific region has several automakers and component manufacturers present including Robert Bosch, ZF TRW, Continental, Hyundai Wia, and others.

Europe is expected to be another important region for market growth. European countries have people with high income and have a high demand for safety features. The presence of several luxury car manufacturers has influenced automotive growth in the region. Moreover, it has influenced the research & development to embed cars with enhanced safety features.

Aisin Seiki, Continental AG, Denso, Robert Bosch, and ZF Friedrichshafen AG are some of the leading players in the industry. The companies are working on developing new products to have a competitive advantage over their counterparts. Many of the leading suppliers in the occupant classification system market focus on strengthening the distribution network by partnerships with other companies. In April 2019, Denso announced that it will invest USD 1.6 billion for increasing its production of automotive electrification systems. Flexpoint Sensor Systems, which is a leading provider of several sensors for occupant detections has several partners for distribution.

Robert Bosch is one of the leading automotive systems suppliers, which is consistently investing in research & development. The company invested around USD 8.2 billion in R&D activities in 2017. It is expanding its manufacturing plants globally including Braga and Portugal. The market has become competitive owing to the presence of several automotive & sensor suppliers.

Airbags emerged as an important safety feature in vehicles during crashes & collisions. However, the earlier airbags were too aggressive and used to impact the passenger with high force, causing serious injuries and even deaths in some cases. This resulted in the growth of the occupant classification system market as there was a growing demand to suppress the force of airbags according to the occupants’ requirements. A rule was issued in the U.S. to make airbags, creating lesser risks of injuries to occupants, especially to children. This motivated automakers to deploy restraint systems for airbags impact as a result every car made in America after 2006 has such systems. Earlier, these systems were implemented in luxury cars. However, the economy & mid-range vehicles have become the key growing markets.

The market size of occupant classification system valued at over USD 2 billion in 2018.
The industry share of occupant classification system is estimated to exhibit 7% CAGR from 2019 to 2025.
Increased emphasis on passenger safety along with introduction of several federal norms encouraging the integration of advanced safety features in newer vehicles is driving the demand for occupant classification systems in the automotive sector.
Increasing consumer spending on new vehicles that are integrated with advanced safety features as well as presence of renowned luxury car manufacturers has influenced new revenue growth opportunities in Europe.
Aisin Seiki, Continental AG, Denso, Robert Bosch, and ZF Friedrichshafen AG are some of the leading players in the industry.
Customize this Report
Inquiry Before Buying