Neonatal ventilators market is poised to experience lucrative growth over the forecast period. Rising neonate mortality rates along with increasing number of preterm births with respiratory disorders are and will be the major factors driving market growth. Moreover, timely technological advancements in neonatal ventilators to address appalling conditions in neonates with respiratory problems will augment industry growth. furthermore, growing birth rate in developing countries should prove to be high impact rendering factor.

Advents in technology with regards to non-invasive methods and improvements in currently practiced invasive respiratory support system should fuel adoptions rates in developed as well as certain areas in developing nations. 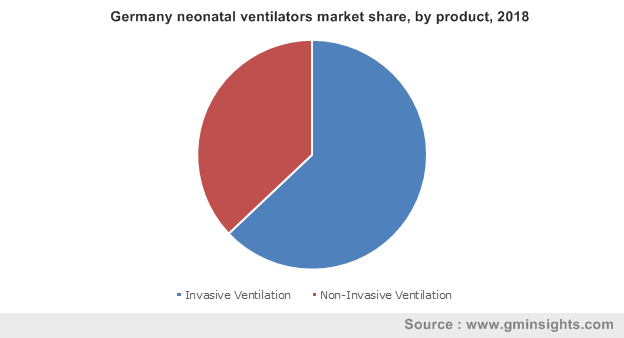 Invasive neonatal ventilators market held the majority market share in the year 2018 and was valued around USD 204.0 million. The market is slated to witness slightly higher growth than non-invasive ones, owing to their wide use in newborn intensive care units and high frequency of use. Invasive systems such mechanical ventilators are currently the mainstream interface used in majority of regions worldwide. However, adoption of non- invasive systems is steadily increasing. A considerable proportion of neonates in resource-poor countries who need respiratory support are subjected to CPAP; whereas, in developed regions it holds prominence of over 70% usage among other alternatives.

With increasing adoption in developing nations, the non-invasive neonatal ventilators market should grow with CAGR of nearly 6.6% during the forecast period. Recent technological advancements have resulted in manufacturing of novel products that will help reduce the risk associated with neonatal care and increase the efficiency of the neonatal ventilation. Hence, these factors will play a crucial role in augmenting the market growth in near future.

Intensive care ventilators market was valued around USD 183.1 million in the year 2018 and is estimated to grow at considerable rate in the near future. Increase in number of preterm births will lead to rise in complications to the infants. According to the World Health Organization (WHO), every year around 15 million babies across the globe are born premature and the number is forecasted to increase further. Hence, growing demand for neonatal care will enhance the market growth in the forthcoming years.

Portable/Transportable ventilators market is projected to witness a significant growth at 6.8% over the forecast timeframe. These type of ventilators are portable and can be carried to the patient location in emergency conditions. Small size, easy to carry and good battery life of the ventilators will help increase the efficiency of the ventilators, augmenting the demand of neonatal ventilators, fueling the business growth.

Mechanical ventilators market held considerable amount of market share and amounted around USD 98.0 million in the year 2018. Advancements in the neonatal care has resulted in significant decrease in mortality and morbidity rates. Since past several years, mechanical ventilators are considered as an important tool for providing life support to the preterm infants that suffer from respiratory distress syndrome (RDS). Hence, these factors will be responsible for the growth of the market in the near future.

High frequency ventilators market (HFV) will witness robust growth at a CAGR of 7.4% in the forthcoming years. These ventilators have become reputable to provide effective treatment to the neonates in several clinical situations. The HFV is known to be safe, effective and less injury prone to the infants. As per the industry experts, HFV will continue to evolve as an essential component in neonatal care in forthcoming years, fueling market growth.

Pressure mode ventilation market amounted around USD 87.5 million revenue in the year 2018. It is one preferred ventilation mode across the major healthcare centers. Increase in number of preterm births with respiration difficulties will lead to growing use of pressure mode ventilation. This type of mode is used on the basis of compliance and resistance of the patient's lungs. Hence, growing prevalence of respiratory failure in the infants will augment the business growth.

Among all the end-users, use of neonatal ventilators is highest in hospitals resulting in largest market share. The hospitals segment accounted around USD 201.1 million in the year 2018. A significant proportion of births happen in hospital settings; thus, the demand for ventilators is highest. During the forecast period, the hospital end-user market segment will continue to dominate, owing to increasing number of hospitals and people’s preference to hospitals over other healthcare settings.

Clinics end-use market segment held noticeable industry share in 2018, being highly preferred setting in developed countries. The clinics end-use segment is forecasted to grow at a robust CAGR of 6.8% over the projection period. Contribution by clinics, which also includes maternity centers to market growth will be significant over the forecast period. Adoption of advanced airway interfaces in clinics and maternity centers should propel industry growth. 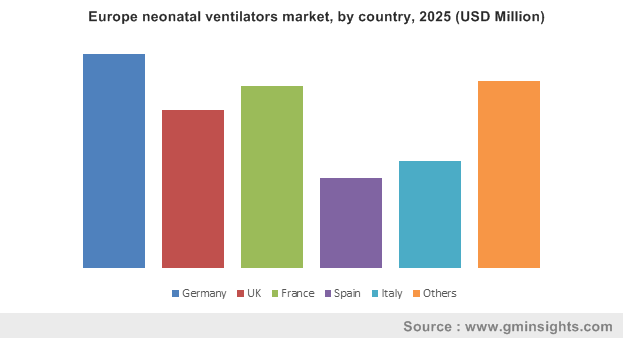 U.S dominated the North American market accounting for around USD 123.3 million in the year 2018. The U.S. holds largest share of the global market as being the oldest and fasted new technology adopting region. During the forecast years, it should experience modest growth owing to relatively low addressable needs. Germany market is poised to expand with increasing application of non-invasive airway interfaces. Early new technology adaptive nature of the country should boost demand for advanced respiratory systems for neonates.

China neonatal ventilators market will witness rapid growth at a CAGR of 10.5% over the forecast period. The grow is attributed to expansion of hospitals, development of new healthcare facilities and growing popularity of private clinics especially in tier 1 cities. Current unmet need and increasing number of births are primary factors to drive industry growth over the forecast timeframe. Improving healthcare infrastructure, rising birth rates, increasing awareness and accessibility to neonate healthcare should propel growth in Brazil market during the projection years.

Medtronic Plc, GE Healthcare, CareFusion, HAMILTON MEDICAL, Phillips Respironics, Smith Medical, Breas Medical, Drager Medical, ResMed and MAQUET are some of the major industry participants. Advancements in existing technology, introduction of new products, geographical expansion and mergers and acquisitions are some of the strategies practiced by these companies to capitalize on market opportunity.

Since the inception of industry in 1960’s, it has come a long way to become a multimillion dollar business sector. Use of neonatal ventilators dates back in 1963, in the U.S.A. Mechanical ventilators were the mainstream systems to assist respiration in neonates and gained rapid popularity worldwide. To address the large unmet needs around the world, few multinational companies started developing new offering to healthcare systems across the globe. With ever increasing need in the face of growing birth rates and respiratory disorders in neonates; timely, more and more products were introduced in the market. By the beginning of 1990’s, advanced technologies such as continuous positive airway pressure was made available by prominent medical devices manufacturing companies. Today, various non-invasive technologies have made into the market and being adopted rapidly worldwide, especially in developed nations.