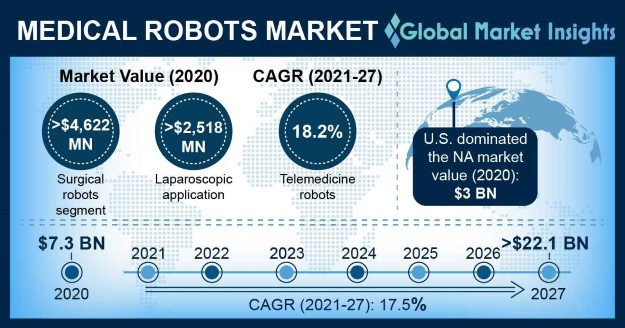 Rising healthcare spending for providing better healthcare infrastructure, increasing disposable income, consistently increasing geriatric population, and surging automation levels in healthcare settings are some of the major factors responsible for increased adoption of medical robots across the world. There is a significant rise in the number of people undergoing several types of implant surgeries coupled with growing awareness towards availability of improved robot-assisted rehab care services for patients. The shortage of surgeons in various countries across the world is also fueling the medical robots market acceptance.

Robotic machines that are used in healthcare sector to perform mechanical work or to assist medical staff in all possible manner can be termed as medical robots. They act as reliable round the clock assistant for surgeons, nurses, sanitation workers and other medical staff. The da Vinci medical robots system is one such example of a general surgical robot available in market by Intuitive Surgical company.

Medical robots are playing a vital role in the ongoing COVID-19 pandemic to curb the spread of infection by providing shielding effect to healthcare staff. They help medical staff to reduce human involvement in range of tasks such as measuring specimen swabs, noting patients' temperatures, disinfecting equipment and various others. The global supply-chain disruption in the initial phase resulted in a minimal decline in production and supply of medical robots in 2020.

Postponed or cancelled elective surgeries were largely concluded in the latter half of the year, thereby levelling the surgery backdrop. Telemedicine robots, disinfecting robots, and surgical robots played a crucial role in serving distant patient's, maintaining hospital cleanliness as well as handling overburden of overall surgeries. In the forecast horizon, medical robots are anticipated to be fully equipped and capable of detecting high-risk and contaminated environment and several other procedures that require AI-driven capabilities.

There is a significant rise in the number of people opting for robotic-assisted orthopaedic surgeries around the world. Lower recovery period post implant procedures are among the key parameter for opting robot-assisted surgery. Also, there is a huge demand for knee and hip replacement procedures globally, which is poised to flare-up during the forecast period. For instance, according to an article published by the UCI Health (University of California, Irvine), number of total knee replacements in the U.S. is predicted to cross by more than 600% by 2030 as compared to the last two decades. Similarly, total hip replacements in the country is predicted to increase by around 200% over the same period. Such high growth in knee and hip replacement procedures will in turn boost the usage of robotic surgeries, thereby resulting in the notable market expansion over the forecast period.

Telemedicine robots segment is projected to witness an 18.2% growth rate through 2027. Telemedicine robots are playing a crucial role in the ongoing crisis especially for remote location patients where the healthcare facilities are distance away. Users are adopting telehealth treatment owing to the factors such as cost-effectiveness of treatment and requirement of minimal infrastructure. Moreover, the 5G deployment especially in developed countries will drive the segment progression during the forecast timeframe.

The neurology application in the medical robots market is anticipated to expand at 18.5% CAGR by 2027 on account of the increasing geriatric population, increasing brain-related disorders, and product innovation is set to play an important role. For instance, according to the U.S. Bureau of Labor Statistics, there is a sharp rise of around 22% in neurosurgical employment including surgeons in the last decade. Similar outlook for neurosurgeons is recorded in developing countries as well, which is prognosticated to upsurge the demand for robotic surgeries in neurology applications over the forecast period.

The medical robots market for ambulatory surgical centers (ASCs) segment is estimated to attain a CAGR of 17.8% from 2021 to 2027impelled by the increasing preference of patients for facilities offering same-day surgical care. Substantially lower treatment cost in ASCs in comparison to hospitals is also fuelling the high adoption rate of ASCs. According to a recently published article, ASCs offer superior treatment and post-operative care services than hospitals.

Increasing surgical procedures in U.S. will foster the growth for North America region 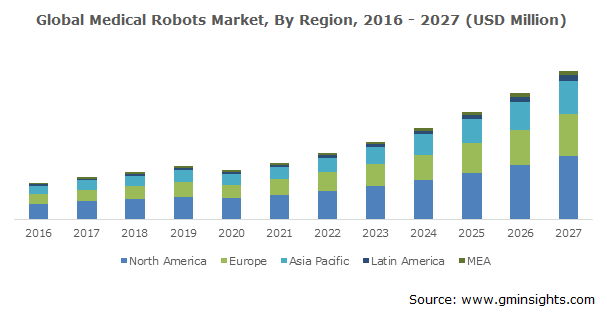 U.S. dominated the North America medical robots market and accounted for USD 3 billion in 2020. U.S. is among the leading countries in terms of technology acceptance across the world. Factors such as highest per capita healthcare spending, increased research and development budgets of major market players, and high volume of surgical procedures performed in the country will augment the medical robots market progression. The country remains at the forefront for adopting advanced medical devices and healthcare robots are following the similar trend. The U.S. accounts for significant share of surgeries in the world, and a substantial percent of them have already shifted to robotic-assisted surgeries. Several different parameters such as better reimbursement plans, cost-effective robotic surgeries and innovative product offering by local players are expected to contribute notably in the regional growth over the forecast period.

Brazil dominated the Latin America medical robots market and was valued at more than USD 190 million in 2020 owing to the rising geriatric population coupled with growing prevalence of chronic diseases. Brazil recorded its first robotic-assisted surgery back in 2008 and since then the country has progressed manifold in terms of deploying medical robots. In order to improve healthcare technology usage and clinical outcomes, robotic surgery is among the preferred choice for Brazilians. Numerous hospitals and institutes across the country including the Brazilian National Cancer Institute adopted robotic-assisted surgery to provide treatment and at the same time invest in innovating similar product range. Cardiac surgery, urologic surgery, gynaecology surgery, and general surgery are some of the most performed robotic surgeries in the country.

Some of the major companies operating in the medical robots market are Stryker Corporation, Smith & Nephew, Medtronic, Zimmer Biomet, ACCURAY, Intuitive Surgical, and Johnson & Johnson among others. The industry leaders are engaged in several different strategic developments including research and development activities, product launches, and acquisitions of smaller players in order to remain competitive and strengthen their market position.

Medical robots market research report includes an in-depth coverage of the industry with estimates & forecast in terms of revenue in USD million from 2016 to 2027, for the following segments:

Medical robots market size had surpassed USD 7.3 billion in 2020 and will record a CAGR of over 17.5% through 2027 with increasing healthcare expenditure, growing disposable income, and increasing adoption of automation in healthcare settings.
Telemedicine robots segment will witness a CAGR of 18.2% through 2027 as it provides cost-effective treatment and requires minimal infrastructure.
Neurology application segment will register a CAGR of 18.5% through 2027 with increasing geriatric population, rising cases of brain-related disorders and product innovation.
The ambulatory surgical centers (ASCs) segment will record a CAGR of 17.8% through 2027 on account of growing patient inclination towards facilities offering same-day surgical care.
U.S. medical robots market had recorded a valuation of USD 3 billion in 2020 owing to higher technology adoption, per capita healthcare expenditure, and increased R&D budgets.
Customize this Report
Inquiry Before Buying