Surgical Robots Market Size was valued at USD 5.5 billion in 2018 and is expected to witness 24.4% CAGR from 2019 to 2025. Technological advancements in surgical robots have positively influenced the market growth during forecast timeframe. Companies such as Intuitive Surgical and Stryker have introduced surgical robots that offer distinguishable performance during the surgeries by reducing complications. 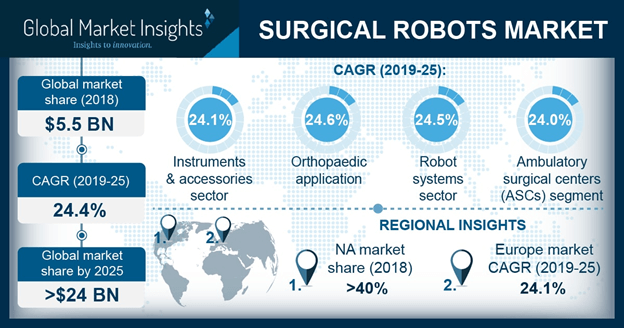 Neurosurgery segment accounted for over 12% surgical robots market revenue in 2018 and is estimated to experience robust growth over the analysis timeframe. Segment growth is attributed to increasing prevalence of neurological dysfunction, stroke and brain aneurysm across the globe. Utilization of robotic operating systems to improve precision, control and dexterity of surgical procedure to offer patients with higher quality of operating interventions will further spur segment revenue.

Orthopedic segment will grow at 24.6% throughout the forecast period. Considerable segmental growth can be associated with massive usage of surgical robots in knee replacement surgeries. According to Wolters Kluwer Journal, in the U.S. around 700,000 knee procedures are performed annually and majority of them are performed utilizing a surgical robot that proves beneficial for the segment growth. 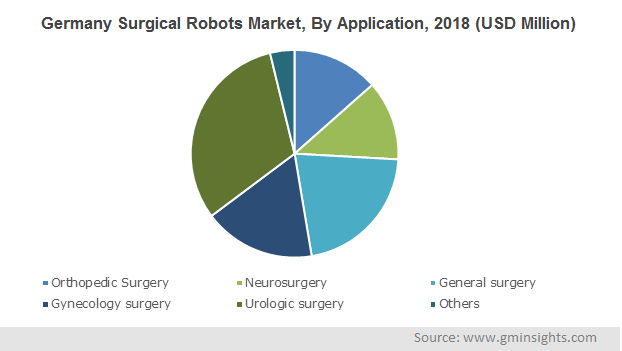 Surgical robots market from hospitals segment was valued at around USD 3.5 billion in 2018 and considerable revenue size can be associated with the increasing number of surgical procedures globally. Increase in the prevalence of chronic diseases and trauma cases has surged demand for surgical robots in hospitals that provide surgeries for chronic diseases. Also, reimbursement available for surgical procedures have escalated the patient inflow in hospitals thereby, augmenting the segmental growth.

Ambulatory surgical centres (ASCs) segment will have over 24% growth during forecast timeframe due to the benefits associated with ambulatory surgical procedures. Majority of the surgical procedures performed at ASCs are fairly reimbursed that resolves the affordability issues in patients with lower income levels. Furthermore, reduced length of patient stay in ASCs is one of the important factors that is expected to drive the segmental growth.

North America surgical robots market size was valued more than USD 2 billion in 2018 and will witness similar trend over the forecast period. Rising prevalence of cancer, cardiovascular, neurovascular, gynaecology and other chronic diseases coupled with high adoption of advanced surgical treatments will drive the regional business growth. Increasing focus of industry players on development of advanced robots to facilitate surgical procedures will positively impact industry growth during the upcoming years.

European market will witness lucrative 24.1% CAGR over the forecast period owing to increasing adoption of robot-assisted surgical procedures in the region. Initiatives of organizations such as the European Association of Urology, including launch of the EAU Robotic Urology Section (ERUS), a scientific platform for urologists interested in the cutting-edge robotic surgery development will lead to increased adoption of robotic surgeries in urology. Benefits associated with robot-assisted procedures such as fewer complications and shorter hospitalization will further increase its adoption in the foreseeable future.

Surgical robots industry can be traced back to 1980’s that witnessed the introduction robots assisting in appendicectomy and cholecystectomy. Initially, surgeons were reluctant to adopt robots for minimally invasive procedures. However, as the surgeons got acquainted with the benefits associated with the surgical robots, its preference increased gradually.

Currently available surgical robots impart the liberty of visualizing tissues in open surgery that reduces the error rate. Additionally, robots are user friendly and provide maximum flexibility. Due to immense reliability possesses by surgical robots, surgeons rely on it during minimally invasive procedures having enormous complications. Introduction of such robots have drastically reduced the mortality rates proving beneficial for the industry growth. Though usage of surgical robots is high in developed countries, its high cost creates demand supply gap. Higher cost of surgical robots limits its adoption due to budgetary constraints. But, as the market revolutionised, cost of surgical robots has considerably reduced.

Leading players will find ample opportunities in the U.S. market that has well-developed healthcare infrastructure. In contrast, Europe relies on public healthcare facilities that may prove to be an obstacle for robotic companies as the adoption of expensive surgical robots may be hampered due to low budget issues. Despite these issues, Europe market still has gathered enormous share due to presence of local players that have strong foothold.