Hydrogen Market size exceeded USD 150 billion in 2020 and is anticipated to grow at CAGR of over 9.2% from 2021 to 2027. Increasing crude oil consumption coupled with rising investments focused on the expansion of the existing refining facilities in emerging countries is poised to create substantial market opportunities for numerous hydrogen manufacturers present across the globe. 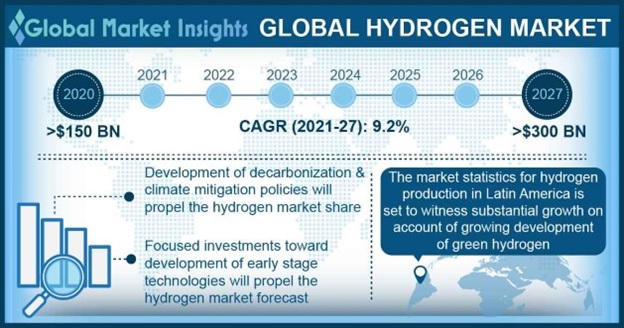 The safety concerns, production cost, existing regulations and slow infrastructure development are limiting the hydrogen adoption. Introduction of a variety of policies aimed at clean fuel acceptance along with increasing R&D investments toward advanced production processes will stimulate the market growth. Further, introduction of policies and standards to limit the amount of sulfur content in gasoline, diesel fuel, and motor oil will augment the hydrogen market expansion in the coming years.

The global economy has been hit hard with the outbreak of coronavirus, also known as COVID-19. According to the World Health Organization (WHO), COVID-19 has impacted more than 200 countries and has adversely impacted the economies leading to lockdowns, thereby limiting the industry growth. The growing focus on renewables to tackle the climate targets is expected to positively impact the industry landscape.

Commercial availability of sustainable technologies varying across sectors including power along with early development is projected to enhance the business outlook. Encouraged use of electrolyzers, shifting focus toward fuel cell technologies along with development of hydrogen based synfuels will positively impacting the industry statistics. In addition, blending of gaseous H2 into the existing natural gas pipelines along with utilization of blended fuels in existing end user appliances will boost the industry expansion.

Increasing government and public related funding programs directed toward clean energy technologies coupled with growing R&D & demonstration spending from the private companies will accelerate the industry progression. Rising investment in the energy technology startups along with strong growth in the number of patents filed for low-carbon energy technologies will impel the industry demand during the forecast timeframe. Shifting focus towards the demonstration & commercialization of new production technologies resulting in zero emissions will enable the usage of H2 in electricity infrastructure and end-sectors. 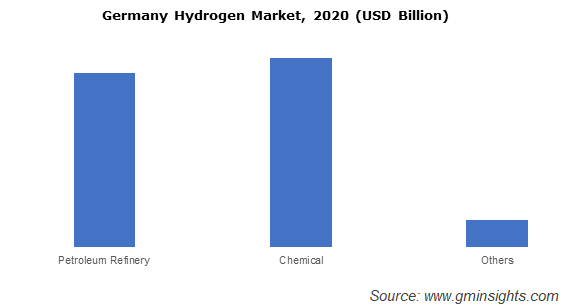 Announcement of hydrogen specific standards in certain economies along with review of existing regulations & legislations will support develop a robust and regulatory framework. In 2020, the Korean National Assembly approved the Hydrogen Law, thereby laying the legal foundations for the government's hydrogen commitment along with implementing the safety standards for the facilities. Lowering regulatory barriers in specific areas including pipeline specifications & product purity combined with harmonizing numerous air pollution standards will facilitate trade across economies, thereby influencing the overall industry value. The release of H2 roadmaps primarily in the EU consisting of installation of renewable powered electrolyzers and large-scale deployment in applications including FCEVs, steel-making & maritime transport among others hold a vast potential in developing a competitive industry.

Long-term energy transition strategy will involve generating hydrogen in a cost-effective way and support develop technology to combine compressed natural gas with hydrogen. Announcement of subsidies on fuel cell vehicles in countries including China will support increase the production of hydrogen powered vehicles, fueling it as a major energy source. Additionally, development of carbon pricing mechanisms will further encourage hydrogen use, thereby creating business opportunities to expand the industry landscape. 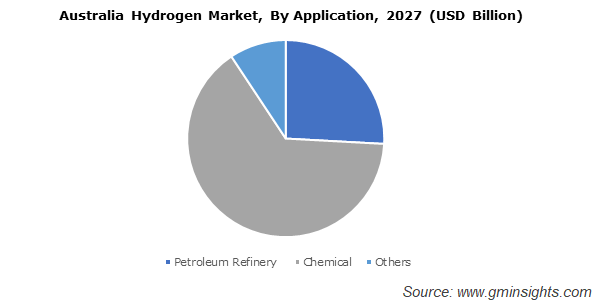 Abundance of renewable energy resources including natural gas reserves, presence of numerous hydrogen storage facilities in UAE, Oman & Kuwait along with well-developed existing natural gas grids will support the Middle East to develop a hydrogen economy. The positive outlook toward the development of pipeline network will foster the demand for low-cost hydrogen production across the region. Shifting focus toward utilization of hydrogen in mobility applications coupled with development of fueling stations primarily in UAE & Kuwait will accelerate the green product penetration.

The market statistics for hydrogen production in Latin America is predicted to witness substantial growth on account of growing development of green hydrogen. Presence of renewable resources including solar & wind specifically in Chile is slated to drive the hydrogen market growth in the country. For instance, the government of Chile, in 2020, announced to have a minimum of 5 GW of electrolysis capacity in development or operation by 2025. Development of hydrogen export hubs allow easier transport of hydrogen to other major markets globally.

Global Hydrogen market research report includes in-depth coverage of the industry with estimates & forecast in terms of “USD” from 2017 to 2027, for the following segments:

Global market size for hydrogen surpassed USD 150 billion in 2020 and will grow at a CAGR of 9.2% through 2027.
Active government and public investments in cleaner technologies and increased R&D and demonstration spending from private companies are driving hydrogen industry forecast.
Middle East & Africa hydrogen industry is growing led by the abundant availability of natural gas reserves and hydrogen storage facilities in Kuwait, Oman, and UAE.
The Latin America market for hydrogen will grow substantially powered by ongoing developments in the green hydrogen space.
Customize this Report
Inquiry Before Buying