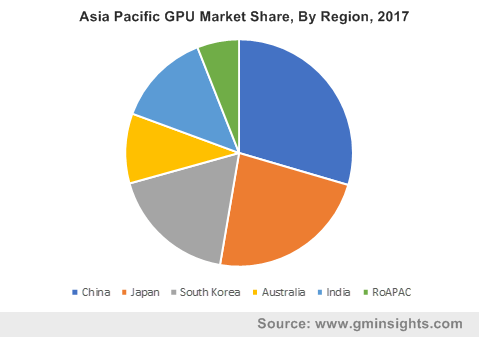 The GPU market demand is due to growing need for specialized processors that can handle complex mathematical calculations related to 2D and 3D graphics. The rising adoption of smartphones, tablets, and consoles for gaming purpose has increased the demand for high-end computing systems that can serve graphics-intensive gaming applications. According to the ITA, the U.S. media & entertainment industry is expected to reach more than USD 830 billion by 2022. The rapid growth of the industry will trigger the adoption of desk-based PCs and tablets, which have high-end graphics cards and processors to enhance the gaming experience.

Another factor fueling the GPU market growth is the rising usage of processors to support graphics applications and 3D content in various industry verticals including automotive, manufacturing, real estate, and healthcare. For instance, to support manufacturing & design applications in the automotive sector, CAD and simulation software leverage GPUs to create photorealistic images or animations. 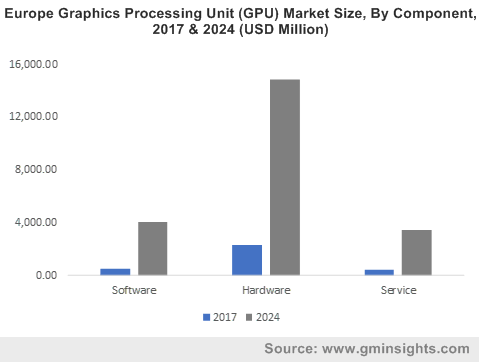 GPU hardware held a major portion of the market share of over 70% in 2017 due to extensive usage of hardware components, such as integrated and dedicated processors, in devices including tablets, gaming consoles, and smartphones to support graphics-intensive applications. GPU shipments are estimated to register a growth rate of around 5% over the forecast timeline. In the hardware segment, the hybrid GPU market will witness robust growth as hybrid processors have capabilities of both integrated and dedicated GPU, which make them a preferred choice among the software developers to enhance the productivity of graphics-intensive applications.

The software segment is expected to witness a growth rate of over 30% from 2018 to 2024. In this segment, the imaging software market will experience the fastest growth rate from 2018 to 2024 due to extensive usage of image processing algorithms in sectors such as healthcare, automotive, and gaming. For instance, in the healthcare sector, high-performance graphics processors are widely used in medical imaging to drive high-resolution displays in graphics systems. 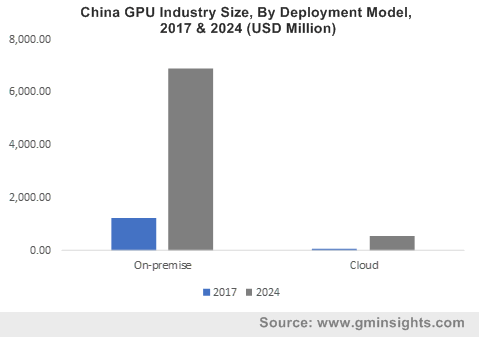 The cloud deployment segment in GPU market is projected to hold a market share of over 5% by 2024. The use of a cloud deployment model will increase as customers are rapidly adopting cloud-based solutions to benefit from the associated scalability and flexibility. The major cloud platform providers including Microsoft, Amazon Web Services, and IBM are entering into partnerships with graphics chip providers to deliver on-demand GPU cloud computing. For instance, IBM provides various cloud GPU configurations and supports NVIDIA Tesla K80 cards, which can provide 8.5 single-precision TFLOPS, 2.9 double-precision TFLOPS with 480 GB/s bandwidth. 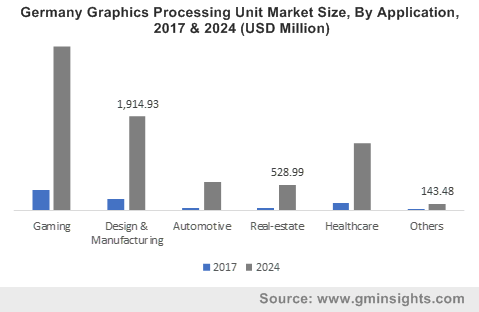 The automotive application segment in the market will exhibit a robust growth rate over the forecast timeline due to extensive usage of graphics processors for design & engineering applications. The automotive design departments are facing growing pressure to rapidly deliver new vehicle innovations, respond to the market’s changing demands, and support an ever-growing product range. Remote workers, external suppliers and partners require faster and better access to data. virtual processors make it easier for automakers to build and collaborate with teams across the globe and scale their computing resources as required.

The Europe GPU market is projected to hold a market share of over 25% by 2024 due to the extensive growth of the gaming industry owing to increased smartphone penetration. According to the Germany Trade & Invest Report, Issue 2016/2017, PCs have remained the biggest gaming platform with 18.4 million active gamers, followed by smartphones (17.2 million) and consoles (15.6 million). The growing trend of social gaming and free-to-play Massively Multi-player Online (MMO) games will drive the growth of the gaming industry in the region. Increasing adoption of cloud-based GPUs by enterprises to eliminate the need for procurement and maintenance of expensive hardware equipment is driving the market growth in the region.

The need for high-computing processors has increased as the CPUs are not capable of handling complex computational tasks of modern 2D and 3D graphics applications. To support high computing applications, companies have begun using CPUs along with graphics cards, which reduced the system downtime and also helped to achieve high performance. GPUs have become an important part of high-performance computing as they are widely used in manufacturing, automotive, gaming, and real estate sectors. To support deep learning applications, the demand for GPU-accelerated computers will increase to store, process, and analyze data to deliver faster insights.

The market size of GPU estimated at USD 700 million in 2018.
The industry share of GPU will grow at a CAGR of 30% from 2018 to 2024.
Europe market is projected to hold a revenue share of over 25% by 2024 due to thriving growth in the region’s gaming industry and an increasing penetration of smartphone devices.
Hybrid GPUs own the capabilities of both dedicated and integrated GPUs and are becoming a preferred choice among software professionals to improve the productivity of graphic-intensive applications.
According to the analysts at GMI, the software component segment is expected to witness a growth rate of over 30% from 2018 to 2024.
The major companies operating in the market are Advanced Micro Devices (AMD), Dassault Systems, Autodesk, Google, IBM, Qualcomm, Intel, Microsoft, Siemens AG, NVIDIA, Nimbix, Amazon Web Services, Penguin Computing, Cogeco Communications, PTC, ScaleMatrix, and S3 Graphics.
Graphics Processing Unit (GPU) Market size valued at over USD 12 billion in 2017 and is predicted to expand at a CAGR of more than 30% by 2024 due to growing popularity of VR in gaming applications.
Customize this Report
Inquiry Before Buying