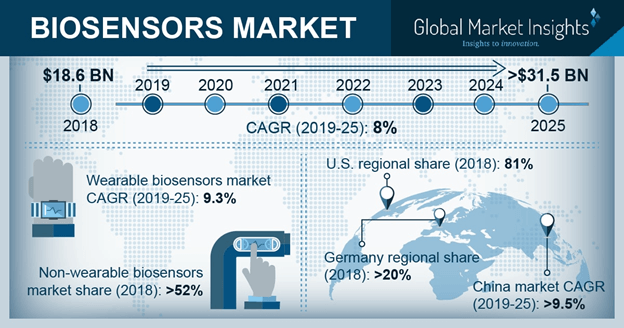 Increasing prevalence of diabetes will positively stimulate biosensors industry growth in the forthcoming years. As per WHO, the number of diabetic patients in 2014 were around 422 million across the world. Rising awareness about self-management of diabetes facilitates amalgamation of advanced technology in the glucometers, thereby driving market growth. For instance, novel glucometers contain embedded microchips that enable accurate and faster detection of blood glucose levels, even at home. Hence, growing preference for such technology and availability of variant diabetic biosensors in the market will boost global biosensors industry growth.

Technological advancements in biosensors technology will escalate adoption rate of biosensors in the foreseeable future. The new biosensor technology delivers innovative, user-friendly and flexible products. This technology is being combined with internet-of-things, smartphones, cloud computing among few other technologies. The development and focus on lab-on-a-chip model in biosensors is gaining pace for point-of-care diagnostics will positively influence biosensors market growth in the forthcoming years.

Non-wearable biosensors market held major market share of over 52% in 2018. Increasing prevalence of chronic diseases such as diabetes, cancer and other disorders will increase demand for conventional methods of diagnosis and detection. Such conventional methods include biosensors that are used in hospitals and laboratories for the detection of blood sugar levels or analysing gas levels in the blood. High accuracy and efficiency provided by non-wearable biosensors along with continuous product developments will highly impact the segmental growth over the coming years.

Cholesterol testing biosensors medical application segment is forecasted to grow at rapid 8.6% CAGR during the projected timeframe. Robust growth can be attributed to increasing obesity rates and related disorders that elevates cholesterol level in the blood. Additionally, increasing shift towards sedentary lifestyle coupled with faltered eating habits such as high consumption of sugar and carbohydrate-rich food will increase the demand for cholesterol testing. According to the National Center for Chronic Disease Prevention and Health Promotion, Division for Heart Disease and Stroke Prevention, about 29 million Americans suffered from cholesterol issues during 2015-16. Such escalating occurence of high cholesterol levels will expand cholesterol testing business growth during the forecast years. 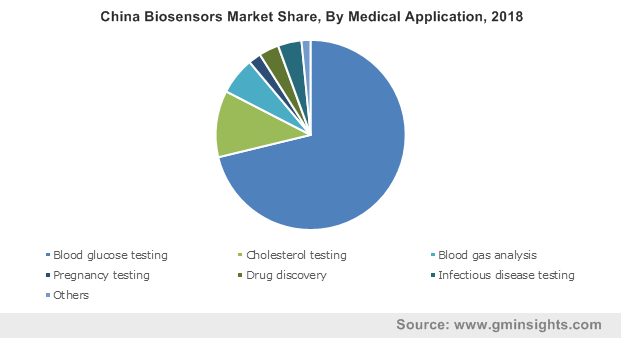 Point of care testing market is estimated to grow at 7.9% CAGR over the forecast period. High growth can be attributed to the advancements and improvements integrated in the biosensor devices used in the hospitals. Good accuracy and efficiency exhibited by such devices have enabled improved surgical performance. Fast detection of analytes near the patient enables better diagnosis of disease, tracking and management. Furthermore, increasing incidence of infectious diseases will elevate adoption of point of care testing biosensor devices in the forthcoming years.

Germany accounted for over 20% of European biosensors revenue size in 2018 owing to high adoption rate of advanced technology across the nation. Innovations in development of biosensing devices such as electrochemical biosensor allowing detection of antioxidant levels will positively influence business growth. Various research institutes in Germany are collaborating to accelerate biosensor research and development thereby stimulating industry growth over the coming years. 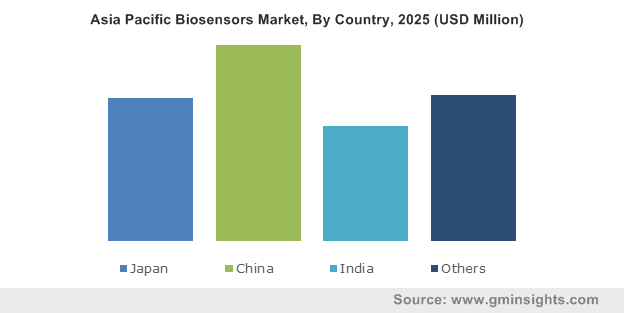 Biosensors were discovered in 1906 when M. Cremer illustrated the co-relation between acid concentration and electric potential in a glass membrane. In 1909, the concept of pH was introduced by Soren Peder Lauritz Sorensen and later realized about use of an electrode for measuring the pH in 1922. The first biosensor was developed in 1956 by Leland C. Clark, Jr. Later, biosensor was followed by development of potentiator. The pioneer biosensor was commercialized by Yellow Spring Instruments in 1975. Further, many research and development activities led to progression of the market with introduction of several products in the healthcare sector using technologies such as nanotechnology, applicatory medicine and electronics.