Biliary stents market size surpassed USD 320.8 million in 2021 and is estimated to grow at over 5.1% CAGR between 2022 and 2028. Increasing incidence of gallstones coupled with the significantly rising prevalence of pancreatic and bile duct cancer are noted to boost the use of biliary stents globally. Further, an increasing adoption of Percutaneous Transhepatic Cholangiography (PTC) and Endoscopic Retrograde Cholangiopancreatography (ERCP) procedures is also observed to significantly increase the demand for biliary stents and recurrent stenting procedures, thereby augmenting the market growth. 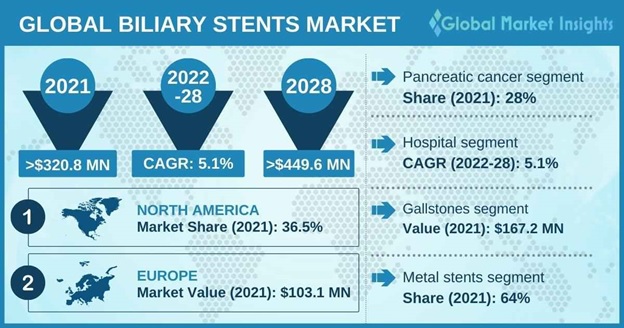 Bile duct is a long tube-like structure that aids in the drainage of bile fluid. Biliary stents, also known as bile duct stents, are employed in disorders causing an obstruction in the bile duct. The bile duct stents are made up of either polymer or metallic materials. Biliary stents are inserted into the duct or lumen to keep the passage open enabling optimum drainage of the biliary fluids. Bile fluids play a major role in food digestion, and it is secreted by liver into intestinal passage through bile duct that opens in intestine.

The outbreak of COVID-19 pandemic had a negative impact on the biliary stents market as the pandemic was noted to have disrupted the healthcare system worldwide, causing significant delays in surgeries, treatment, and diagnosis of non-emergency disease conditions. With the increasing number of COVID-19 cases, several local and national regulatory bodies-imposed lockdowns, restricting the movement of people and goods. The imposed lockdowns largely affected the company’s operations while also hindering the overall market’s supply chain, resulting in the delayed and limited supply of biliary stents to end users. The significant impact of pandemic on the product delivery is also estimated to have potentially resulted in a decline in bile duct cancer care and hampered the industry growth in the initial months of the COVID-19 pandemic. Several cases also established a link between corona virus infection and a subsequent liver injury that resulted as a major complication. Hence, it is estimated to have an optimistic impact on the global market as the restrictions are eased down.

The technological advancements and effective diagnosis procedures have enhanced the accuracy level of ERCP and PTC test. For instance, according to Gastrointestinal Endoscopy Journal, the overall success rate of repeat ERCP procedure is 95%. Furthermore, increasing adoption of minimally invasive procedures are propelling the market demand. Increasing technological advancements associated with the detection and treatment of gastrointestinal disorders, including bile duct obstruction, provide certain benefits such as, shorter hospital stays, lesser chances of infection, and quick recovery. Such factors are boosting the adoption rate of biliary stents contributing to the overall biliary stents market expansion.

The increasing population diagnosed with bile duct cancer and chronic liver disease is expected to propel the overall growth of biliary stents market globally. For instance, as of 2021, according to the American Cancer Society, about 8,000 people in U.S. are diagnosed with bile duct cancer annually. The actual number of cases are expected to be higher as these cancers can usually be hard to diagnose and might be misclassified as one of the other cancer types. Bile duct cancer can possibly lead to enlargement of a tumor blocking the bile duct. Hence, the placement of a biliary stent can assist optimum drainage of the bile.

Further, according to the CDC, in 2021, 4.5 million of adults were diagnosed with chronic liver disease in U.S. alone that contributes to 1.8% of country’s total adult population diagnosed with the disease. An inflammation in the liver as a part of liver disorders can potentially lead to the bile duct blockage, requiring the placement of a biliary stent. Owing to such aforementioned factors, the market for biliary stents is anticipated to remain driven throughout the forecast period.

Increasing prevalence of biliary leaks, pancreatic cancer and other malignant obstructions is increasing the demand for metal stents

By type, the market is segmented into metal stents and polymer stents. The metal stents segment accounted for nearly 64% market share in 2021 and is expected to register lucrative CAGR over the forecast period. Metal stents are mesh-like tubes composed of thin wires and are available in wide variety of lengths and diameters. The self-expandable metal stents have a post expansion diameter ranging from 6-10 mm. The major drivers of metal stents include rising incidence of bile duct -related diseases such as biliary leaks, pancreatic cancer, and other malignant obstructions, such as gallstones, leading to blockage of bile duct. The metal stents are noted to offer better patency, minimal slippage post-placement and longer lifecycle. Thus, the demand for metal stents is rapidly increasing, thereby augmenting the market outlook.

Increasing prevalence of gallstones will foster the segmental growth 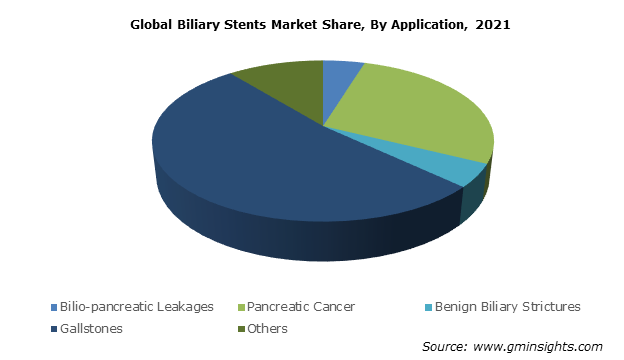 By application, the biliary stents market is classified into bilio-pancreatic leakages, pancreatic cancer, benign biliary strictures, gallstones, and others. The gallstones segment accounted for USD 167.2 million revenue in 2021. Lifestyle changes such as adoption of an unhealthy and sedentary lifestyle coupled with a family history of gallstones, are observed to be some of the prominent factors leading to the high prevalence of gallstones. The occurrence of gallstones is termed as non-fatal and one of the most common diseases of the biliary system. For instance, it is estimated that nearly 20 million people in the U.S. i.e., 15% of the country’s population have gallstones. As these tend to create blockages in the biliary tract, an optimum management of gallstones is very essential. Hence, this leads to the increasing adoption of biliary stents, thereby fostering the industry growth.

The end-use segment of the market is bifurcated into hospitals, specialty clinics, ambulatory surgical centres, and others. The ambulatory surgical centres are expected to register more than 5.3% CAGR between 2022 and 2028. With several advantages of ambulatory care such as lowered costs, quick recovery as well as lower rates of infection coupled with the rising preference towards minimally invasive procedures, the segment is witnessing a higher demand in developed and some parts of the developing countries. Additionally, increasing adoption of biliary stents and related procedures requires minimal risk of complications to attract a wider customer base. Hence, factors such as increased adoption of minimally invasive procedures and increased healthcare expenditure are noted to drive the segment demand.

North America region accounted for over 36.5% business share of the global biliary stents market in 2021. Increasing geriatric population susceptible to diseases such as pancreatic cancer, gallstones, and other malignant obstructions are some of the major factors that will drive the regional market size. Moreover, increasing awareness of advanced technology for the diagnosis and treatment will favor the North America biliary stents industry forecasts.

The global biliary stents market research report includes an in-depth coverage of the industry with estimates & forecast in terms of revenue in USD from 2017 to 2028, for the following segments:

Global market for biliary stents crossed USD 320.8 million in 2021 and is expected to expand at a CAGR of 5.1% from 2022 to 2028 driven by the surging incidence of gallstones and the increasing prevalence of pancreatic and bile duct cancer.
Metal biliary stents market held around 64% of the revenue share in 2021 and will grow with the rising incidence of bile duct-related diseases such as pancreatic cancer, biliary leaks, and other malignant obstructions.
The market share from gallstones application was around USD 167.2 million in 2021 and is expected to depict lucrative growth owing to the adoption of sedentary and unhealthy lifestyle.
North America biliary stents market captured 36.5% of the overall revenue in 2021 and is set to grow impelled by the soaring geriatric population and increasing awareness regarding advanced technology for diagnosis and treatment purposes.
Customize this Report
Inquiry Before Buying