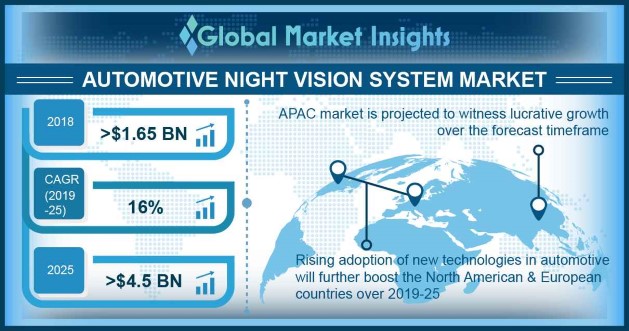 The automotive night vision system market has emerged for improving the visibility of drivers in varied conditions such as darkness and poor weather. Safety of pedestrians and animals has become an important concern particularly in the night with nearly 50% of the accidents taking place at night according to the European Commission. These systems assist the driver by increasing situational awareness in low-light situations. The market has been influenced due to the capabilities of these systems to extend the perception of drivers beyond the reach of the vehicle’s headlights.

On-road safety is being highly focused by several governments as well as automotive manufacturers. The companies are inclined toward adding multiple features for safety with strong research & development activities. The emergence of Advanced Driver Assistance Systems (ADAS) is an important factor propelling the industry growth. Moreover, autonomous and semiautonomous vehicles need to implement these systems for ensuring safe driving, which is also expected to play a vital role in influencing the market growth. 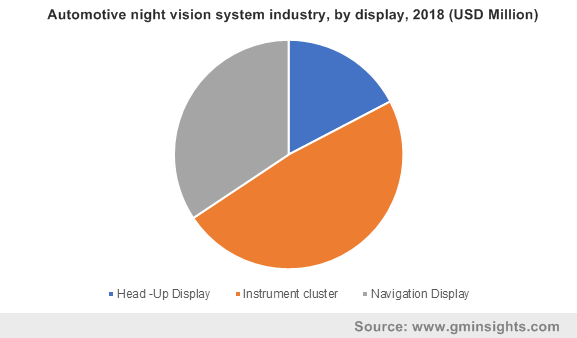 The automotive night vision system market comprises passive and active systems. Active night vision system is growing at a CAGR of over 17% over the forecast period. These systems make use of the integrated infrared light source for visibility in the dark. The major automotive manufacturers offering active night vision systems are Mercedes-Benz, Toyota’s Lexus, and others. An important benefit of these systems is that the infrared light bands fall outside the spectrum that is visible, ensuring that the oncoming drivers do not suffer temporary blindness, which is an important concern with high beam headlamps. Hence, the infrared lights can show the objects which are far away than the reach of headlights and active systems are expected to significantly contribute to the market.

BMW, Audi, and Honda are some of the automakers offering passive night vision systems. The passive system works by detecting the heat emitted by objects by using thermal cameras. These systems can differentiate between the objects, cooler objects and warm objects. These systems can work well with the objects emitting thermal radiation; however, they face difficulties in detecting the objects at similar temperatures with the surroundings. Hence, these systems are expected to be less adopted in the market compared to the active systems.

The Head-up Display (HUD) is projected to exhibit a high growth rate over the forecast period. HUDs emerged in the automotive night vision systems market owing to the need to reduce the distractions created by navigation displays to showcase information. These displays project the night vision information directly on the windshield ensuring minimum distraction. Some of the companies, such as Siemens, in the market are developing HUD-based systems. HUD has provided a safer alternative to looking at the remote display for information. However, multiple objects directly in front of the drivers can still be distracting to some extent. The adoption of HUDs in several luxury cars, such as BMW 7 and Volvo XC 90, will propel the use of HUDs in the market.

The developments in sensor technologies will play a vital role in influencing the automotive night vision system market. The sensors help in detecting the objects in low-light conditions such as cyclists, pedestrians, driving lanes, and road signs. Denso Corporation and Robert Bosch GmbH are among the leading suppliers of sensors in the market. In January 2018, Denso announced its new night vision sensor for object detection. This sensor additionally helps the automobiles in deploying the emergency braking system automatically after detecting the object. This sensor is implemented in Toyota’s Vellfire and Alphard. The capabilities of the sensors, such as detection of different types of signs, higher sensitivity, and emergency braking, will propel the advancements in the industry. 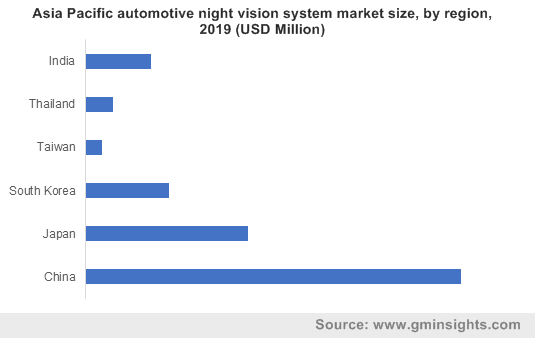 Asia Pacific is expected to be one of the major regions for the automotive night vision system market. China was valued at over USD 300 million in 2018. The presence of a large number of production facilities particularly in China and growth in the demand for luxury cars are major factors contributing towards industry growth. China is a major manufacturer in the automotive sector and one of the largest markets globally. The country has been witnessing a growing demand for luxury cars. Audi recorded an increase in year-on-year sales in one month by 34.3% in December 2017 compared to December 2016. Mercedes delivered more than 70,000 vehicles in China in January 2019. The demand for luxury vehicles and large production are expected to boost the growth in the region.

Autoliv Inc., Denso Corporation, Delphi Technologies, and Robert Bosch GmbH are among the major companies in the automotive night vision system market. The companies are inclined toward developing vehicle-specific systems directly by partnering with automotive manufacturers. For instance, Autoliv has developed night vision systems for BMW cars, which can detect the objects three to four times farther than the range of headlights. The major players are also shifting their focus on compact cars to gain higher share in the market. Denso developed a small stereo sensor particularly for compact cars with warning systems for pedestrian and lane departures. This sensor helps in automatically switching the headlamps from high to low beam to improve night vision. The frequent product developments by the manufacturers will propel growth.

The market saw a significant boost with the advancements in sensor technologies. Companies have been offering systems with different displays such as center stack and head-up display. Increase in premium car buyers and steps toward increasing road safety.

The market size of automotive night vision system was estimated at over USD 1.65 billion in 2018.
The industry share of automotive night vision system will grow at a CAGR of 16% from 2019 to 2025.
According to this research report by GMI, the global industry shipments are set to exceed 5 million units by 2025.
Owing to presence of several production facilities and the growing demand for luxury vehicles, APAC is set to emerge as a prominent growth facilitator for the industry.
Autoliv Inc., Denso Corporation, Delphi Technologies, and Robert Bosch GmbH are among the major companies in the market.
HUD displays project information directly on the windshield, making them less distracting than conventional navigational displays.
Customize this Report
Inquiry Before Buying