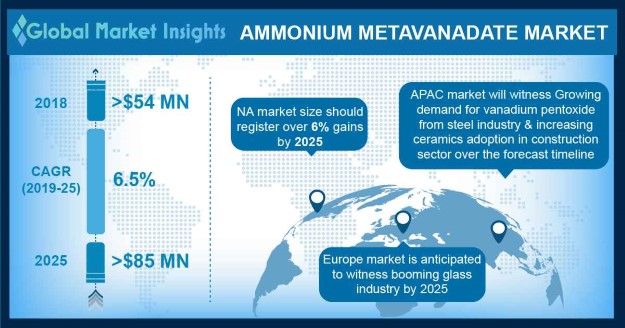 The product is a white, yellow or clear crystalline powder which is widely used as a laboratory reagent for the production of various chemicals such as catalysts, vanadium pentoxide and polyoxidovanadates. The product releases ammonia gas on heating and finds extensive usage in paints, varnishes, inks, dyes and photographic developers.

The ammonium metavanadate market finds application in the commercial synthesis of manganese vanadate, silver vanadate and vanadium oxide as it is routinely used as a reagent, intermediate or substrate. It is widely used to produce Mandelin reagent which finds widespread usage in the detection of dangerous drugs such as PMMA, PMA and psychoactive substances. The product imparts a yellow color to the reagent which changes when the reagent is added to a sample containing an alkaloid, thus serving as a useful kit to detect various substances.

The product is ideal as a reagent in the laboratory and analytical chemistry. It serves as a precursor of various medicinal agents on account of its low cost, mild reaction conditions, high yield and operational simplicity. It is used for production of catalysts for inorganic and organic synthesis.

It is among the most common laboratory reagents along with potassium metavanadate used in biotechnology, cell culture, and biotherapeutics.  The product plays the role of an intermediate in the synthesis of sodium carbonate and hydrochloric acid. To ensure the steady availability of raw materials for the reaction to continue, the ammonium metavanadate is heated which regenerates the reagents used in the synthesis of sodium carbonate.

Ammonium metavanadate of min. 99% purity is dominant in industry applications 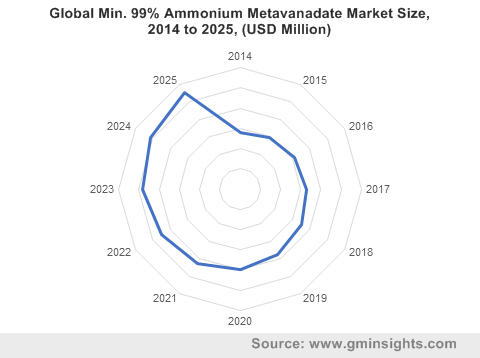 Based on purity levels, ammonium metavanadate market is segmented into 98%-99% and min. 99% purity. Ammonium metavanadate of min. 99% purity is a white crystalline powder with a particle size of less than 1 mm. The product’s purity ranges from 99% to 99.99% and it offers the advantages of being odorless & high chemical stability under normal conditions. Its high purity and fine particle size make it an ideal catalyst for the production of organic compounds such as benzimidazoles used in pharmaceutical industry.

Ammonium vanadate of min. 99% purity is moderately soluble in water and highly reactive with alkalis which increases its suitability as a laboratory reagent. The product presents low probability of undergoing hazardous reactions such as polymerization which indicates high stability for storage & usage. The product is ideal for the production of the dioxido-vanadium(V) complex which is a widely used catalyst owing to its desirable biochemical properties and the interconvertible oxidation states of vanadium.

The product is commonly used in the production of the photocatalyst vanadium oxide-titania by the wet impregnation method.  This catalyst plays a crucial role in various industrial reactions such as the oxidation of alkanes & aromatics and the catalytic reduction of nitrous oxides. Ammonium metavanadate of min. 99% purity creates an acidic solution with water which is highly reactive and helps neutralize bases without releasing excessive amounts of heat.

This product finds extensive usage in the combustion analysis of hydrogen, nitrogen and carbon pertaining to its non-combustible nature. It is used for producing alloys in the metals industry, printing, chemical reactions, medicines and photography.

Ammonium metavanadate market is segmented based on product forms including powder and granule. The product has slight solubility in water which increases its suitability as a dryer for inks, paints and dyes. It is also used as a catalyst in the dyeing of fur & leather pertaining to rising preference for such products and growing adoption in textile industry. It finds widespread usage in staining wood black, indelible ink, hematoxylin staining in medical diagnosis, photographic developer, developing pottery luster, and printing & dyeing of woolens. The dyes containing ammonium vanadate are majorly used in paints & coatings, printing inks, packaging and textile sectors.

The product is ideal for the printing & dyeing of cotton, production and fixing of aniline black on silk. It improves the performance of various quick-drying inks and imparts enamels & glazing on ceramics. It serves as a catalyst in the production of organic intermediates of polyester, nylon and synthetic inks. Modernization of retail industry and changing lifestyles have led to rising requirement for packaging ink, which, along with technological advancement in water-based ink technology will be the major factor shaping industry dynamics. 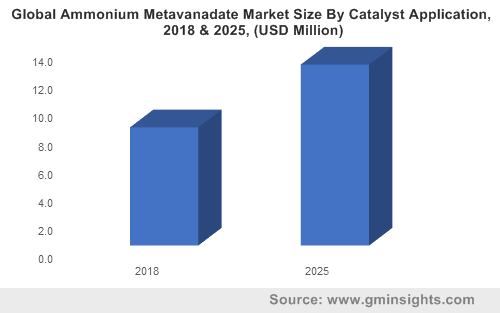 Based on applications, ammonium metavanadate market is segmented into chemical reagents, catalysts, paints, inks & dyes, and ceramics applications. The product is routinely used as a catalyst in inorganic & organic synthesis which includes the production of adipic acid and vanadium pentoxide. The product ensures the conversion of cyclohexanol-cyclohexanone mixture formed during the adipic acid production process into the final product through continuous oxidation with nitric acid at a temperature of 75°C. It also plays a major role in the production of catalysts used in the reduction of harmful nitrogen oxides emitted from boilers.

The product is significantly used in the manufacturing of the vanadium pentoxide catalyst owing to the relative simplicity of the production process. Vanadium pentoxide is extensively used as a catalyst in the commercial production of sulfuric acid by the contact process where it ensures the oxidation of sulfur dioxide to trioxide at 440°C. It also catalyzes chemical reactions in the production process of varnishes, paints and dyes.

North America to remain an attractive destination for the product demand

The report covers regions including North America, Europe, Asia Pacific, Latin America and Middle East & Africa. North America ammonium metavanadate market size should register over 6% gains by 2025. Lead-acid, nickel-based, lithium-ion, flow batteries and sodium-based batteries accounted for about 0.75 GW of rated in the U.S. in 2018 owing to the presence of several energy storage projects in the country. The product is well-suited for electrodes used in rechargeable sodium-ion batteries owing to their excellent rate, reversible capacity and high electrochemical performance regarding sodium.

The product is well-suited for energy storage & load leveling services in smart grids pertaining to its ability to be synthesized easily, excellent energy density, small charge transfer resistance, superior cycling stability and discharge capacity. U.S. smart grid spending was about USD 2.5 billion in 2019 owing to growing electricity demand and government incentives which should fuel the requirement of rechargeable sodium-ion batteries.

In November 2015, global science & technology firm Merck KGaA completed the acquisition of life science company Sigma-Aldrich which is primarily involved in the manufacture & distribution of chemicals, ceramics, ammonium metavanadate, biopharmaceuticals and labware. The agreement expanded Merck’s product portfolio, ensures market expansion in the life science sector and entrusts the company with the complete control of its entire biotechnology production chain.

The ammonium metavanadate market research report includes in-depth coverage of the industry, with estimates & forecast in terms of volume in Tons & revenue in USD from 2014 to 2025, for the following segments:

The ammonium metavanadate market in 2018 exhibited a revenue of US$ 54 million.
The worth of ammonium metavanadate market is expected to reach a valuation of US$ 85 million by 2025.
Ammonium metavanadate is widely used as a laboratory reagent for the production of various chemicals such as catalysts, vanadium pentoxide and polyoxidovanadates. Additionally, the product is routinely used as a reagent, intermediate or substrate in the commercial synthesis of manganese vanadate, silver vanadate and vanadium oxide.
North America market size for ammonium metavanadate should register over 6% gains up to 2025 as it is well-suited for electrodes used in rechargeable sodium-ion batteries owing to their excellent rate, reversible capacity and high electrochemical performance regarding sodium.
According to a study done by GMI analysts, the market revenue was over USD 54 million, globally in 2018.
The industry is estimated to grow at over 6.5% CAGR during the projected timeframe of 2019 to 2025, according to this Global Market Insights, Inc. forecast report.
Customize this Report
Inquiry Before Buying