Telecom Network Infrastructure Market is set to reach USD 100 billion by 2026; according to a new research report by Global Market Insights, Inc.

The telecom network infrastructure market growth is attributed to rising penetration of wireless devices across the world. For instance, according to GSMA, a trade body that represents interest of mobile network operators worldwide, the number of smartphone penetration was 60% of total world’s population in 2018.

This rapid increase in number of smart devices is putting a huge burden on existing telecom infrastructure; thus, companies operating in the telecom industry are focusing on improving their telecom network infrastructure to meet the rapidly changing demands of cellular users. The rising demand for next generation 5G network is also supporting the market revenue.

Macrocell is expected to hold the market share of over 40% by 2026 due to rising number of cellular users in rural areas. The range of macrocells can be affected by the physical obstruction present in its targeted area. The range of the macrocells can also be increased by increasing the efficiency of a transceiver. Major telecom companies operating in the market are partnering with other design & engineering companies to develop LTE macrocell solutions.

For instance, in January 2019, CommAgility, a leading telecom group, partnered with Aricent, a leading digital technology company, to develop LTE eNodeB solutions for networking equipment providers. This partnership helped the company to support the changing requirements of network equipment providers to accelerate the development of 5G network. 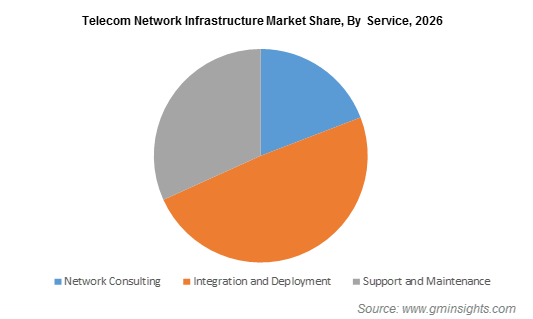 4G/LTE held the telecom network infrastructure market share of over 60% in 2019 due to increase in demand for bandwidth-intensive applications. 4G can provide data speed of 10 Mbps to 1 Gbps that can support high-speed applications such as Multimedia Messaging Service (MMS), video chat, mobile TV, HDTV content, IP telephony, and Digital Video Broadcasting (DVB). Major telecom service providers operating in the market are forming strategic partnerships for expansion of their 4G network.

For instance, in April 2019, Smartfren Telecom, a leading telecom service provider in Indonesia, partnered with ZTE Corporation for the expansion of 4G network. This partnership helped the company to offer an enhanced telecom network infrastructure in Indonesia. The improved coverage of 4G LTE network is playing a key role in market.

Growing mobile penetration is fueling market growth in the APAC

The telecom service providers operating in the market are also emphasizing on rapid commercialization of next generation 5G network. For instance, in June 2019, China Mobile, a leading telecom operator in China, announced a USD 4.4 billion investment plan to build 50,000 5G base stations in the country by the end of 2019, to support its ambitious 5G rollout plan in 50 cities. Supportive government initiatives for improvement of the telecom industry in the region are also helping market growth. For instance, in September 2018, the Government of India released the National Digital Communication Policy that aimed at attracting USD 100 billion investment for development of communication infrastructure in the country.

Telecom Network Infrastructure Market
Call Us  Request Free Sample
Top
Chat with us
We use cookies to enhance your experience. By continuing to visit this site you agree to our use of cookies. More info X