Sodium Acetate Market size will surpass USD 220 million by 2024; according to a new research report by Global Market Insights.

Over the recent years, sodium acetate industry has witnessed a remarkable progression across the world due to the rapid industrialization, massive FDI investment, and other factors driving the leather & textile sector. The positive growth in leather & textile industries owing to the increase in per capita income level, change in lifestyle, etc. will, in turn, bolster the sodium acetate market demand by 2024. The product is used as a pickling & buffering agent at the time of production process of leather goods. It is also used in dyes for textile printing, as the waste streams produced from the textile industry contain high amount of sulfuric acid, which is neutralized by using sodium acetate trihydrate. This will fuel the overall sodium acetate industry growth by 2024. Asia Pacific and North America are on the top of the list for noteworthy consumption due to the presence of myriad end-user industries.

Availability of various substitute products is one of the key restraining factor for sodium acetate market growth over the forecast period. Sodium citrate can replace sodium acetate in dialysis fluid and widely used as anticoagulant and antioxidant. The biocompatibility of sodium citrate is higher as compared to sodium acetate, since it is a natural metabolite with anti-inflammatory properties. Thus, these factors will restrict the sodium acetate industry growth in future. 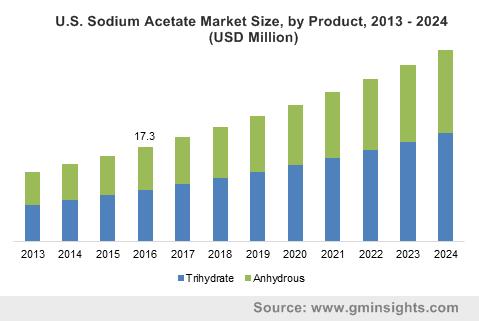 Leather & textile, food, medical & pharma are the major end-user segments in sodium acetate market. Minor end-user industries include polyester fiber, photography, etc. and have been considering in the others segment. In terms of revenue, medical & pharmaceuticals will likely generate over USD 70 million in 2024. This is owing to the wide usage of the product as an ingredient for diuretic, expectorants and systemic alkalizer in drugs, also used to form re-usable heating pads due to the superior physical and chemical properties.

Asia Pacific and North America’s sodium acetate market will be the most notable regional markets with more than 70% of the total industry over the forecast period. Asia Pacific will account for around USD 120 million growing with the substantial CAGR in future. Significant production, availability of raw materials, and low labor cost along with highly mature textile and food processing industries in this region will promote the Asia Pacific industry growth in forecast period, which in turn will positively influence the entire sodium acetate market growth. High demand from the medical & pharma industries will boost the industry growth in North America and in terms of revenue the region will account for over USD 45 million by 2024.

Sodium acetate market research report includes in-depth coverage of the industry with estimates & forecast in terms of revenue in USD million from 2013 to 2024, for the following segments: