Home > Pressrelease > Rocket Propulsion Market worth over $8bn by 2027

Rocket Propulsion Market Size is set to surpass USD 8 billion by 2027, according to a new research report by Global Market Insights Inc.

Rising investments in the space sector by governments and private companies are driving the rocket propulsion market growth. For instance, in April 2020, the National Aeronautics and Space Administration (NASA) allocated a fund of USD 579 million for the development of the first phase of lunar-lander. Increasing interaction between private investments and government support policies will speed up the market expansion during the forecast timeline.

Emerging technologies including green propellants and rotating detonation rocket engines are creating new market opportunities. NASA, the Indian Space Research Organisation (ISRO), and other research organizations are using green rocket propulsion as an alternative to conventional chemical propulsion for future satellites and spacecraft. The technology seeks to improve the overall efficiency of the propellant while reducing ground handling, manufacturing, and transportation concerns.

Political insurgencies are challenging the rocket propulsion market progression. The rocket propulsion system is highly dependent on third-party contracts and long-term agreements. Several countries outsource their rocket manufacturing process to foreign countries to reduce their manufacturing costs and time. There is a significant involvement of government authorities when a contract is signed between countries, giving the market a political outlook. Insurgencies between the countries create political disruption, impacting the industry growth.

The rocket propulsion market was not significantly impacted during the COVID-19 crisis. China and the U.S. continued their rocket launches and maintained a high rate of rocket launches despite the impact of the COVID-19 crisis. The U.S. launched 44 missions, several of which were aimed to place payloads deep space and in the Earth’s orbit. Similarly, China launched 35 successful orbital missions out of 39 in 2020.

The hybrid propulsion segment is expected to witness around 15% growth rate through 2027 led by its escalating use in transferring heavy payloads to LEO, MEO, and GEO satellites. A hybrid propellant is a combination of liquid and solid reactants. The hybrid rocket propulsion system is much safer, efficient & sustainable compared to solid and liquid propellants, contributing to its growing industry expansion. 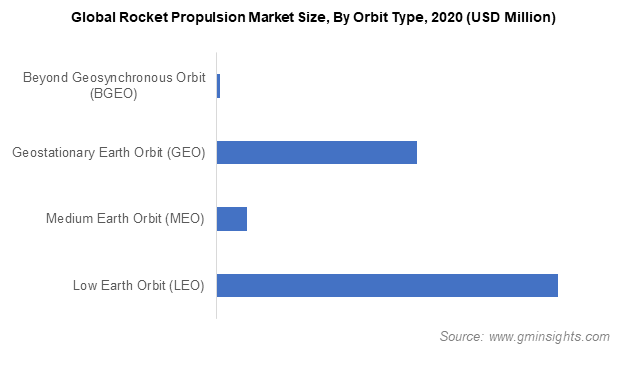 The GEO segment is anticipated to hold 30% of the rocket propulsion market share by 2027. GEO is commonly used by satellites that need to stay above a specific place for a longer period and continually observe specific areas. Growing launches of telecommunication satellites and weather monitoring satellites in GEO to cover a large range of the Earth will foster the industry progression.

The defense & civil segment in the rocket propulsion market is estimated to attain a CAGR of 8% during 2021 to 2027. Rising defense expenditures of several economies to establish strong military and cyber operations along with the deployment of various types of satellites are impelling the market value. According to the World Economic Forum, in April 2020, out of 2,666 operational satellites circling the Earth, 1,007 were for communication services. Increasing spending by the military and governments to combat emerging space threats will contribute to the market development over the forecast period.

Increasing federal funding and the presence of prominent leaders will create the growth opportunities for U.S. region

The U.S. rocket propulsion market captured over 30% of revenue share in 2020. Increasing government investments in deep space & moon exploration programs and the presence of prominent private companies, such as SpaceX, Blue Origin, and Lockheed Martin, are some of the factors stimulating the market demand. According to the Planetary Society, the U.S. government allocated USD 22.629 billion, a 5.3% increase from the previous fiscal year. Advancing knowledge, rapid innovation, and the creation of new technologies in the space industry are spurring the regional growth.