Radio Access Network Market size is slated to surpass USD 15 billion by 2025; according to a new research report by Global Market Insights, Inc.

A radio access network (RAN) is the part of a telecommunications system that connects individual devices to other parts of a network through radio connections. A RAN resides between user equipment, such as a mobile phone, a computer or any remotely controlled machine, and provides the connection with its core network. 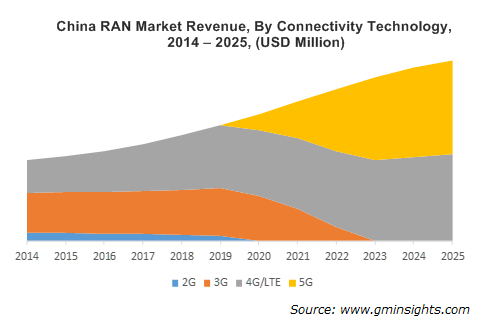 The radio access network market growth is attributed by an increase in the demand for next generation 5G network. The 5G network has improved bandwidth and speed capabilities compared to 4G LTE network. The increase in data incentive applications due to rising internet penetration is enabling telecom operators to improve their cellular coverage. The government authorities are taking initiatives to support the commercialization of 5G network. For instance, in November 2018, the Federal Communications Commission (FCC), an independent agency of the U.S. government, regulated interstate communication services and issued a 1,550 MHz spectrum for the use of 5G network by commercial wireless providers. Favorable government initiatives for making technological advancements in the telecom sector will support radio access network (RAN) market growth. For instance, according to the India Brand Equity Foundation, the Indian government is going to invest approximately USD 100 billion in a new National Telecom Policy 2018 by the end of 2022, which will support rapid technological advancements in the telecom sector.

Femtocell segment held the radio access network (RAN) market share of over 50% in 2018 due to rising demand for improved indoor cellular coverage in densely populated urban areas. The rising urbanization is resulting in a greater number of cellular devices in small places such as offices and residential areas. Existing cellular network infrastructure faces challenge in providing network coverage to these devices. Femtocell enables communication service providers to offer improved indoor network coverage to small locations such as small offices and homes. The UE in indoor location are usually not moving at high speed that makes femtocell ideal choice for providing improved network coverage for high capacity indoor applications.

5G connectivity technology in radio access network market is expected to grow at a significant rate over the forecast period due to supportive initiatives by governments and private players for commercialization of 5G network. 5G technology provides greater speed compared to current 4G LTE cellular networks. As 5G network is evolving, it is essential to perform continuous standards testing to increase innovations in networking technologies. Testing 5G RAN requires planning, performance benchmarking strategy, test automation, and reporting. Its deployment will be characterized by a highly dense, throughput focused, and software-driven nature. Major telecom solution providers are using 5G radio access products for commercialization of 5G network. For instance, in July 2019, Fujitsu delivered a complete set of its 5G base stations to NTT DOCOMO for commercialization of 5G network. This venture helped NTT DOCOMO to rapidly deploy 5G network at a lower cost.

The suburban & rural area segment is expected to grow at a growth rate of over 6% in the radio access network (RAN) market during the forecast period due to an increase in mobile penetration in suburban and rural areas. Suburban and rural areas lack the telecommunication infrastructure to provide improved cellular coverage. Traditional LTE solutions are expensive to provide cellular coverage to a distant area. Traditional LTE system is complex due to requirements established by mobile operators, increasing challenges in expanding cellular coverage. Backhaul network connects RAN to the core network. The demand for RAN solutions is rising in suburban and rural regions. Small cells are preferred base stations over macrocells in rural deployment as multiple small cells can be deployed with minimum additional cost. These small cells can be deployed rapidly compared to other base stations.

China is expected to lead 5G deployment over the forecast period

Asia Pacific radio access network (RAN) market is expected to grow at a CAGR of over 8% during the forecast period due to the rising smartphone penetration in developing countries including India and China. For instance, according to the International Telecommunication Union (ITU), more than 40 million smartphones were sold in India in the 3rd quarter of 2017. ITU also stated that India became the second-largest market for smartphones after China surpassing the U.S. with over 400 million Indians connected by 2G phones. The major technology companies are partnering with other technology companies to develop innovative radio access solutions. For instance, in February 2019, Rakuten, a Japanese telecom operator partnered with Intel to develop a fully virtualized RAN solution. This partnership helped the company in providing greater flexibility and agility to expand its market and offer RAN services outside Japan.

The radio access network market research report includes in-depth coverage of the industry, with estimates & forecast in terms of revenue in USD from 2014 to 2025, for the following segments: