Power by the Hour (PBH) Market size is set to surpass USD 30 billion by 2025; according to a new research report by Global Market Insights Inc.

Power by the Hour is a service program provided for the maintenance/insurance of all components in commercial aircraft, business jets, and commercial helicopters. The major components covered under this program include aircraft engines and landing gear & breaks. The program helps aircraft operators to reduce their operational expenditure by fixing the maintenance cost of major components such as aircraft engines and landing gears.

The power by the hour market growth is attributed to an increase in the demand for commercial aircraft and business jets. Increasing export & import and the rising passenger traffic in regions, such as Asia Pacific and the Middle East, are propelling the demand for commercial aircraft. A rise in the number of Low-Cost Carriers (LCC) around the world is also contributing to market growth. The program helps the airlines to reduce their financial risks by significantly reducing the expenditure on unscheduled maintenance. Low-cost airlines are actively opting for these programs as they help in reducing the maintenance cost and aircraft downtime. For instance, in March 2017, the national carrier of Kazakhstan, Air Astana entered into a long-term contract with Lufthansa Technik to provide for the overhaul & repair of the A320 fleet. Under the contract, Lufthansa Technik will provide maintenance to V2500 engines. The contract includes 25 planned shop visits along with any unscheduled maintenance of the engines. 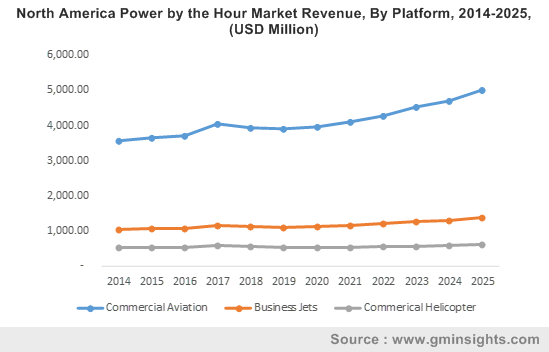 Engine maintenance will remain a key growth driver for the industry

Engines held a market share of over 40% in 2018 due to the rising demand for narrow body aircraft from low-cost airlines in Asia Pacific. The engine is one of the most crucial & expensive components of an aircraft and requires regular maintenance. Aircraft operators incur a significant expense during unexpected breakdowns. With the rising low-cost airlines, the demand for Power by the Hour program is increasing as they usually outsource aircraft maintenance to MRO service providers, as well as engine manufacturers.

Commercial aviation is expected to grow at a significant rate during the forecast time frame due to the rising cargo movement, increasing tourism, and favorable government policies. The demand for narrow body aircraft is expected to dominate the commercial aviation market due to the rising regional connectivity in countries including India, China, and South Africa. The open sky policies and optimistic geopolitical relationships between countries are contributing to commercial aviation growth. The demand for long-term contracts from narrow body operators to increase aircraft efficiency and reduce operational cost is propelling the demand for Power by the Hour program. For instance, in October 2017, Indigo Airlines signed a 10 year, Fleet Management Program (FMP) contract with Pratt & Whitney to support its regional aircraft. Under this contract, the company will provide maintenance & support to PW127M engines, which will power the ATR72-600 regional aircraft of Indigo. The airlines also opted for FAST (Flight, Acquisition, Storage and Transmission) which will help regional airlines to increase their aircraft availability and achieve maintenance compliance and schedules.

Rising number of low-cost carriers across the globe

Most of the low-cost airlines are focused on increasing the flight hours of their aircraft and any stretched downtime can cost them a huge profit to avoid most of the airlines prefer to outsource the maintenance services and opt for the Power by the Hour program. Most of the service providers offer a complete suite, which includes inventory management, line maintenance, and hangar maintenance. The demand for line maintenance is rising in Asia Pacific due to the presence of major MRO service providers and narrow body fleet size operators. Line maintenance includes scheduled & unscheduled maintenance. It usually occurs in the airport tarmac and is done between the flight schedule or the turnaround time of an aircraft.

Growing demand in the Middle East and Africa

The Middle East & Africa power by the hour market is expected to grow at a CAGR of over 7% during the forecast period due to the presence of major airlines and increased wide body aircraft deliveries. The countries including South Africa and the UAE have huge potential for growth due to the presence of tourist spots and the rising export & import services. Favorable government initiatives, such as Single African Air Transport Market (SAATM), are supporting the region’s commercial aviation growth. The SAATM aims at advancing civil aviation by creating a unified air transport market for African Airlines. The initiative started in 2018 and over 28 countries have signed agreements to open their aviation markets.

Major companies are focusing on long-term contracts with major airline operators in Asia Pacific and the Middle East. For instance, in September 2019, Vistara has entered into a long-term contract with Airbus to provide parts and engineering support for all regional full-cost carriers. Under this contract, Airbus will provide aircraft maintenance and data analytics services along with component inventory management for 62 aircraft.

Power by the Hour (PBH) Market